DECATUR, Ill. (DTN) -- It's a cold fact that hail can be an ugly, four-letter word. So far, early June has been filled with hail events scattered across several states.

DTN Ag Meteorologist John Baranick said several of those events have produced hail with diameters in excess of 2 inches. Many of those events have been focused in Nebraska, Kansas and eastern Colorado. The most significant event occurred on June 7 where 36 such reports were sent into the National Weather Service.

"Hail is formed when strong thunderstorm updrafts bring very moist air up through cold -- but not too cold -- upper levels of a cloud. The combination leads to small ice crystals encountering supercooled water (liquid water but at temperatures below freezing) high in the cloud," Baranick explained.

"With stronger updrafts and perfect temperatures, hailstones persist in the cloud for a longer period of time, gaining size. These hailstones can fuse together to form the large ones. Fused hailstones typically have an unusual shape that looks more like a spikey ball as opposed to smaller hail which is typically fairly round," he added.

Planting delays may mean a younger crop is currently in the field in many parts of the country. There are some good resources to help assess what it means if you've been hammered by hail or simply have an interest in what it might mean to yield.

The University of Nebraska's "Hail Know" Team delivers an online guide to all things hail-related covers everything from how to assess damage to how to work with your insurance agent to whether a cover crop can help as a post hail option. Find the easy to access reports and videos here: https://cropwatch.unl.edu/….

The Nebraska group noted in a release last year that hail damage evaluations change as the crop moves past the V6 stage in corn and into the reproductive stages of soybeans. Find that write up here: https://cropwatch.unl.edu/…. Educators this year followed with another look at plant recovery and replant considerations: https://cropwatch.unl.edu/….

Soybeans typically endure hail better than corn since they have additional growing points at the axillary buds. Loss occurs when hail damages below the cotyledon. However, soybeans do compensate somewhat for reduced stands. Read more here: https://extensionpublications.unl.edu/….

One thing is for certain: Hail damage requires some mental fortitude to wait and give the crop a chance to recover, Dan Quinn, Purdue University corn specialist, told DTN.

"It really takes four to five days to see how corn is going to come back. It depends a lot on how tight the leaves were rolled, stage of crop -- kind of the same as we say with flattened corn. Give the crop a chance," Quinn said.

Corn smut and bacterial diseases are the main worry with corn following a hail event, Quinn said. "However, there's been a lot of research done to show that fungicides do not help corn after a hail event," he added. "I know a lot of farmers swear by doing that, but we have never seen a response because fungicides generally do not control corn smut and bacterial diseases."

As the plant closes in on pollination, leaf defoliation becomes more of a concern, but Quinn recommended checking in with your crop insurance agent as soon as a wind or hail event happens. Taking stand counts early in the season is a great practice to establish a baseline. Photos as soon as possible after the hail event to document damage and continued documentation throughout the season are also recommended.

One thing to keep in mind, according to the University of Nebraska, is the importance of understanding the method being used to estimate growth stages when working with insurance. For example, they noted the horizontal leaf method of staging is used by the National Crop Insurance Service (NCIS) -- it counts all visible leaves where the tip of the leaf points below the horizontal position, compared to the often-used university method of counting collared leaves.

Baranick said unfortunately the risks for hail depend on where you live. "The greatest risks for severe hail in the U.S. occur in the Plains states from early March through mid-August, especially from mid-April through June. The risk of greatest probability shifts from the Southern Plains in March through May, to the Central and Northern Plains June through mid-August. Kansas remains in the higher probability zone throughout the main 'hail season'," Baranick noted.

For a bulletin from Purdue University on hail damage, see https://www.agry.purdue.edu/….

Need to control volunteer corn in a replant situation? Go to: https://extension.entm.purdue.edu/….

For more information on wind damage in crops go to https://www.dtnpf.com/…. 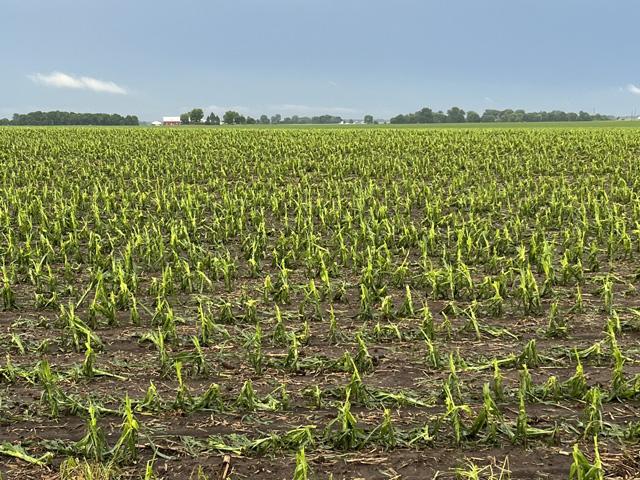