DECATUR, Ill. (DTN) -- Floppy, cold corn is not what you want to see in late May. But that's exactly what Chase Sauder has been dealing with this week after temperatures dipped below freezing western Nebraska.

Sauder, who farms and is also an agronomist with Pioneer, said beans appeared to endure the May 22 cold snap much better than corn where he farms near Grant. He hoped warming weather would help perk up the plants. "We won't know much until Friday [on crop conditions] is my best guess," Sauder said.

DTN Ag Meteorologist John Baranick said a cold front over the past weekend produced moderate to heavy snow in Colorado and sent temperatures below the freezing mark. "Most of Colorado, Nebraska, the Dakotas and northern Minnesota saw temperatures fall near or below 32 degrees on Sunday, May 22. On Monday, May 23, the coldest air shifted eastward into the Midwest. Northern Minnesota, Wisconsin and Michigan all had issues with frost. A couple of spots in northern Iowa did as well. USDA emergence data suggests that both Colorado and Nebraska may be the spots that had the highest potential damage from the frost on Sunday," Baranick said.

It's tempting to jump to conclusions following frost events, according to Purdue University agronomist Dan Quinn. However, frost isn't necessarily the kiss of death, he told DTN. "The main thing is to wait three to five days to assess the extent of damage," Quinn said. "If new leaf growth is observed to be elongating and the growing point region is still healthy, then stand establishment of the plant is not likely harmed.

"Young corn (prior to the V-6 growth stage) is more tolerant to above ground damage due to the growing point being below ground," he added.

The real question is whether the temperature that accompanied the frost event was lethal. For young corn that usually means temperatures that dip to 28 degrees for one to two hours.

At first plants that got cold and plants that got lethally cold are hard to differentiate. Both can have leaves wither and die back. The difference lies in the recovery of the leaf tissue. Plants that will not recover can be detected eventually by slicing down the middle of the stem through the crown of the young plant, which eventually reveals discolored and mushy tissue.

Ever see one plant get nipped and the other right next to it standing fine? Quinn said it could be caused by a plant that emerged from the soil later. Differences in soil coverage from crop residue can influence the amount of heat radiated by the soil, thus helping prevent frost damage, he noted.

"Typically, areas with higher crop residue can result in higher incidence of frost damage. Bare soils tend to radiate more heat upward to the young corn plants, which may be just enough to help prevent frost damage," he said.

The same could be said for cover crops, he observed. "The higher residue cover by the dying cover crop could reduce the amount of upward heat radiation from the soil," Quinn said.

Those tender, newly emerging soybeans can also be vulnerable to cold. But University of Nebraska Emeritus Soybean Agronomist Jim Specht said it takes several hours of temperatures below 31 degrees at the soil surface for the cold to fully penetrate the soybean cotyledon's protective barrier.

Specht said the collective assessment is it takes more than air temperatures to dip below 32 degrees (F) to impact above-ground tissue. The cell cytoplasm has solutes that work like a type of anti-freeze, which depresses the freezing point of the tissue to a degree or two less than 32 degrees, he said.

"Thus, air temps surrounding the tissue have to get below 32 to about 30 degrees F. before tissue freezing can occur," he noted.

Keep in mind that the soybean cotyledons are a huge mass of tissue that are about 95% water. "That big amount of water-filled tissue is hard to freeze unless the exposure to temperatures of 30 degrees (F) or less at the soil-air interface is many, many hours," he said. "Cotyledons will freeze faster (in fewer hours), but only if soil surface temperatures get below 30 degrees, say around 25 degrees," Specht said.

He said the cotyledons have a bit more protection when they are still closed or in the "prayer position" and the young stem tip is protected. "However, if that tip is frozen off, the two nodes to which the cotyledons are attached can regenerate two main stem tips.

"It's not an ideal way to start the growing season, but better than having to replant," he said, noting that soybean yield loss is generally one-half bushel per acre per each day soybeans are not in the ground after May 1.

If the cold seeps deep into the plant and kills off the hypocotyl, the stem below the cotyledons, the game is over. "That knocks out the stem and all the nodes. The plant will be limp and blackish and waterlogged within 48 hours," Specht said.

Soybeans can compensate for some stand loss. If the worst happens and here's a good source to help when considering soybeans replant: https://coolbean.info/… 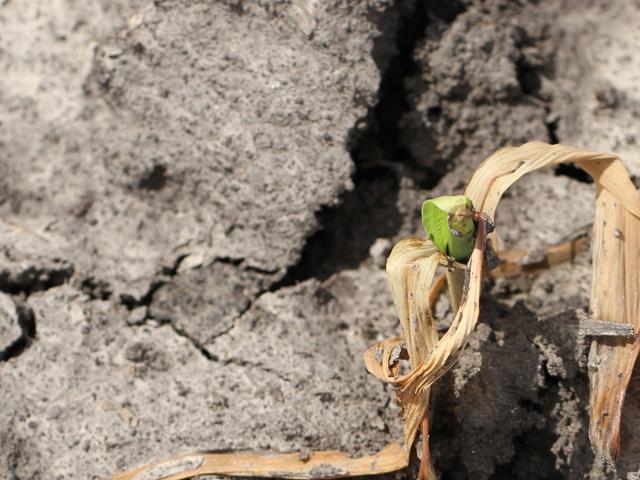