Drought and heat stress that affected crops in northern and central Kansas, which contributed to a first-day tour weighted average yield of 39.5 bpa, got even worse as the tour shifted to the southwest and south-central part of the state. Fields in several counties in northern Oklahoma were also sampled.

(For a video interview with Aaron Harries, vice president of research and operations with Kansas Wheat, about estimated yield results and more observations from Day 2 of the tour, see https://www.dtnpf.com/….)

Scouts stopped at 254 fields on Day 2. Some wheat sampled at the start of the day near Colby and toward the end of the day near Wichita were green and healthy with good stands. The high yield range varied from 44 to 105 bpa, according to Day 2 results.

But many fields in the southwest corner of Kansas -- much of the region is in an extreme or exceptional drought, according to the latest U.S. Drought Monitor -- are in bad shape. Low-range yields, if fields are harvested at all, were estimated from zero to 28 bpa.

"It's ugly," said Jackson Allen, a grain merchandiser for Gavilon in Wichita, Kansas, as he walked into a field near Dermot, Kansas. It contained sparse stands and plenty of exposed, powdery dirt. "I've had many farmers I work with describe some of their fields that way as well. It's a good chance it won't be harvested."

Kansas State University (KSU) wheat specialists and industry officials said up to 10% of Kansas wheat acres could be abandoned this year due to poor plant development and yield prospects. Kansas farmers planted 7.4 million acres of winter wheat for the 2022 growing season. USDA forecast 6.95 million acres would be harvested.

An irrigated circle across the road from the dryland field that Allen called "ugly" is even struggling. The pivot was on as Allen's tour group took yield estimates, which only tallied a projected 15 bpa.

"It was shocking that even under irrigation that kernels were lacking," Allen said, though it's unknown why. "There's potential the heads could grow with more water, but it shows the severity of the drought."

Romulo Lollato, KSU Extension wheat specialist, said this year's crop has endured a lack of moisture starting in the winter, intense heat in early May, freeze damage in areas and high winds.

Lollato expected wheat yields to be low in the southwest corner of Kansas where rainfall is 3 to 6 inches below normal from Oct. 1, 2021, to April 18, 2022, according to National Oceanic and Atmospheric Administration (NOAA) data. But he thought yield potential would increase fairly quickly as his tour group traveled east, which it didn't.

"That's a big change from what I was expecting," Lollato said. "I saw stunted and heat-stressed crops well into southcentral Kansas."

Similar to Day 1, little disease and insect pressure was reported on the second day of the tour.

Day 2 tour reports weren't all doom-and-gloom. Wheat farmer Martin Kerschen of Garden Plains said his area of the state may be the "sweet spot" for wheat. The Kansas Wheat commissioner farms 2,500 acres about 20 miles west of Wichita.

Some parts of southeast Kansas have received normal to slightly above normal rainfall, including Kerschen's farm, from Oct. 1, 2021, to April 18, 2022, according to NOAA.

A yield estimate of one of Kerschen's hard red winter wheat fields was 59 bpa. "It should be pretty good if we can get it in the bin," he said. "I'm always looking for the next hailstorm." A few fields were found on Day 1 that were ruined by hail.

Scouts will briefly explore fields from Wichita to Manhattan in southeastern Kansas on Thursday, May 19, before the tour's final yield estimate and production projection is released. 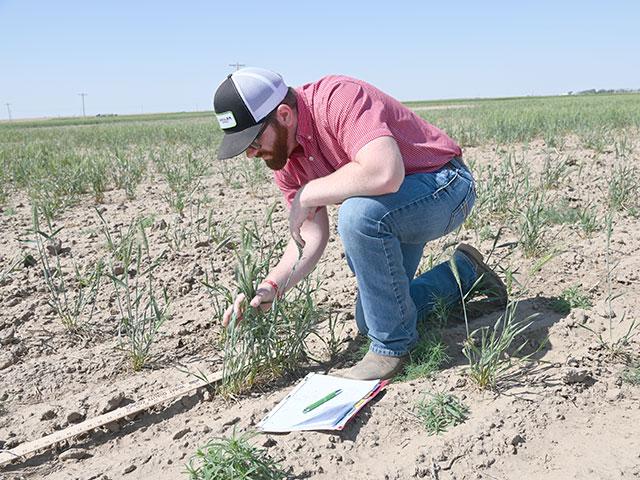