The tour made 248 stops through central and northern Kansas, and a few of the southernmost counties in Nebraska, to measure wheat production and health. Drought and heat stress has taken a toll on the crop -- gaping cracks in some fields more than a foot deep were found due to poor moisture levels -- but disease and pest pressure was light.

"The crop is about what we expected," said Romulo Lollato, Kansas State University Extension wheat specialist. "Wheat is better in the eastern part of the state (Kansas), which is still dry, with some fields going 45 to 65 bpa. Then there's rough wheat to the west, especially in the double-crop fields, where we saw 10 to 15 bpa."

One of Justin Knopf's wheat fields near Gypsum, Kansas, assessed on the tour would normally yield about 65 bpa with adequate moisture. But it only received 2.5 inches of rain from Nov. 1 through May 1, which isn't near enough for normal plant development. Since May 1, another 1.5 inches of rain fell, but he's afraid it's too little too late.

"The field will probably yield in the mid-40s (bushels per acre)," Knopf said. He stopped by the field to chat with tour participants. "Our overall yields will be below our average of 50 bpa. I think our whole farm average will be in the upper 30s."

He planted 1,600 acres of hard red winter wheat this year. The near certainty of producing less wheat than normal this year when the world needs it more than ever weighs heavily on Knopf's mind.

-- Ukraine's wheat production and exports will be limited due to Russia's attack on the country.

-- USDA estimated ending wheat stocks for the world's top eight exporters, including the United States, will total 1.78 billion bushels in 2022-23, the lowest exportable supplies in 15 years.

"It's unfortunate we didn't get enough rain with what's happening in the world," Knopf said. "Wheat is an important crop to feed people. I feel the responsibility of being a supplier of food. I take the responsibility to do what I can to preserve the yield I do have seriously."

He did spray the field recently for brown wheat mites.

Spotty stand establishment was a common site on Day 1 of the tour, and that will likely continue to be a trend, wheat specialists said.

On Wednesday, May 18, tour scouts will travel through western, southwestern and south-central Kansas. One route will dip into northern Oklahoma. The day will end in Wichita.

"In southwest Kansas, because of the poor conditions, people will try to figure out how many fields will be abandoned," said Kansas Wheat CEO Justin Gilpin. "As we move closer to Wichita, we will (likely) see higher yields."

Watch a video interview with Gilpin about Day 1 of the wheat tour here: https://www.dtnpf.com/…. 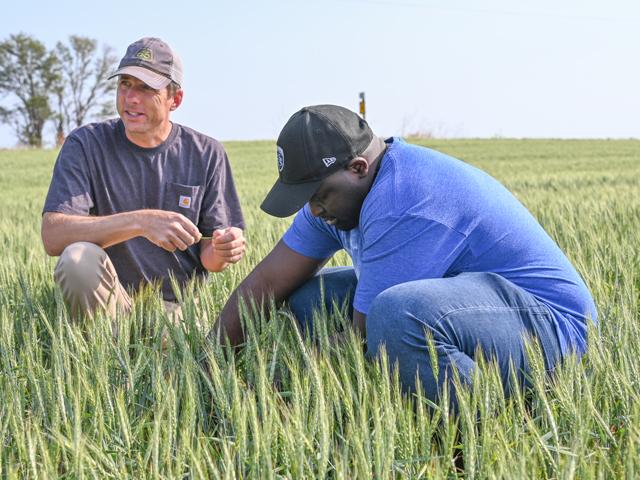