ROCKVILLE, Md. (DTN) -- With many planters still stalled by wet weather, some farmers are eying the calendar and wondering when and if they should switch to shorter-season corn hybrids or soybean varieties.

For most, there is more time than they might expect, explained Brent Tharp, a technical product manager for Wyffels Hybrids. Most research suggests dropping to a faster-maturing hybrid isn't necessary until deeper into May, he noted.

For soybeans, decision time is even later, well into June, according to soybean agronomists from multiple Midwest states. "Soybeans have the ability to adjust development caused by late planting because they are photoperiod sensitive," as two Iowa State University crop scientists, Mark Licht and Sotirios Archontoulis, noted in a university guide to late soybean planting.

But with continued wetness in the northern Corn Belt, it's worth reviewing when to make the switch, how to safely drop maturity groups and how to tweak planting population, if necessary.

WATCH FOR THESE CALENDAR DATES

Agronomically, Tharp picks May 23 as a reasonable time to start thinking about switching corn hybrids. "Ultimately, calendar date is a bad way to look at things, because corn development is heat-driven," he cautioned. "But almost regardless of where you're at, I would hold off until that week. That's about the time when we start running out of growing season and run into more of a risk of the plant not being fully mature before a frost."

Although they don't share soybeans' famous sensitivity to daylength, corn plants do adjust their growth a little to account for late planting, he noted. Specifically, university researchers in Ohio and Indiana have documented that corn hybrids will mature with fewer accumulated growing degree units (GDUs) when planted late. The discovery led now-retired Purdue University agronomist Bob Nielsen to draw up charts with the estimated number of calendar days and heat units necessary for a late-planted field to mature prior to a freeze. You can find those guides here: https://www.agry.purdue.edu/….

Soybeans are even more forgiving of late planting. An Iowa State University study, for example, found that the same soybean variety in different plots reached maturity only seven to 10 days apart, despite being planted 40 to 60 days apart.

As a result, most agronomists suggest early June as the time to consider switching maturity groups. University of Wisconsin soybean agronomist Shawn Conley tells growers not to consider it until around June 1 and settles on June 15 as the necessary date to downgrade from your original maturity group, in his guide to late soybean planting. See it here: https://coolbean.info/….

In Iowa, Licht and Archontoulis also land at June 1 -- for northern Iowa. Farther south, sticking with the same maturity group that is adapted for your region is a better bet until closer to mid-June, they note. See their full advice here: https://crops.extension.iastate.edu/….

ONLY MAKE SMALL ADJUSTMENTS IN MATURITIES

If you do make the call to switch hybrids, don't make a huge leap to a shorter season one, Tharp cautioned. "Look for about five to six days of maturity to adjust," he suggested.

Remember that these shorter-season hybrids come with a yield penalty. "Each day of maturity equates to roughly a 2-bushel-per-acre yield advantage," Tharp explained. "So, if you go from a 110-day hybrid to a 100-day hybrid, that's a possible 20-bushel yield potential you're giving up."

Likewise, most agronomists recommend only dropping 0.5 to 1 maturity group in later-planted soybeans.

"If planting is delayed until mid to late June or, more likely, replanting is needed, a variety that is at least a full MG earlier should be considered to avoid fall frost damage," Conley said in his guide to late planting.

PLANTING POPULATION: TO ADJUST OR NOT?

Purdue's Nielsen conducted nearly 100 trials on corn planting date and population and reached a solid conclusion -- there's no need to increase seeding rates for late-planted fields. "Optimum plant populations probably remain the same regardless of planting date," he wrote in his guide to delayed corn planting. See it here: https://extension.entm.purdue.edu/….

It might be worthwhile to lower your seeding rate slightly to accommodate the likelier rapid germination and emergence in the warmer soils of late May or early June, he added.

Personally, Tharp said he doesn't even recommend that tweak -- just forge ahead as you would have in April. "We recommend you don't change your seeding rate, planting depth, or much else," he said.

Soybeans are a different story. Earlier-planted soybeans canopy faster, maximizing photosynthetic power and weed control. As a result, most agronomists agree that farmers can increase planting population to try to reclaim some of these benefits with later-planted fields.

There's no need to go sky high -- Conley's recommendation is simply to aim for 154,000 seeds per acre. Purdue University soybean agronomist Shaun Casteel suggests a 10% increase in seeding rate for each week of delayed planting into June, in his guide to late planting.

Don't expect a huge yield response to these increased seeding rates, they all caution. "If increasing seeding rate, make sure to consider extra seed cost into the decision," as South Dakota State University's Extension agronomist Johnathan Kleinjan puts it in this article: https://extension.sdstate.edu/…. 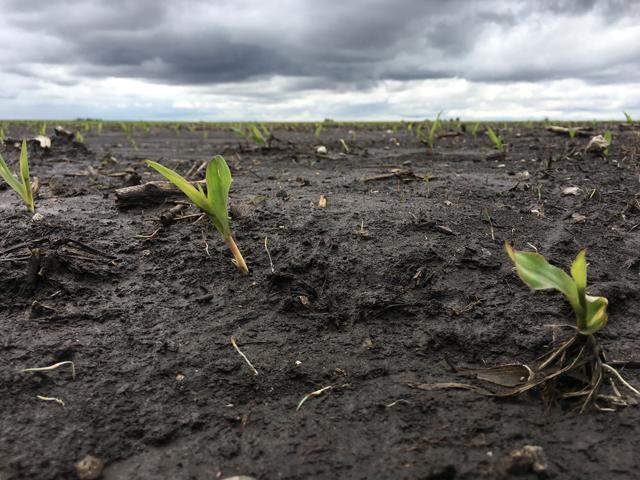