The following is a recap of fertilizer price trends and market developments for the month of March 2022.

Winter was slow to leave the U.S. in March, which prevented much preplant fertilizer application and other fieldwork in the Midwest. This translated to a slow month for ammonia activity, but developments overseas supported higher prices, as prices rose quickly in the previous month.

Corn Belt volumes rose from the $1,300s per short ton (t) free-on-board (FOB -- without transportation costs) in February up to $1,450 to $1,550 in March. Further increases were also expected due to the higher Tampa price but did not happen before the end of the month.

The ammonia plant near Woodward, Oklahoma, offered $1,275/t for ammonia at the end of March -- on the lower end of available volumes in the region after the price increases, although offers $50 below this level were also heard around the same time. Highest prices from plants in the state were reported at $1,350/t.

Incitec Pivot's plant at Waggaman, Louisiana, remained down for turnaround at the end of March, continuing to restrict U.S. Gulf ammonia availability in local markets and for Corn Belt pipeline volumes. The company had previously confirmed a rupture in a section of pipe at the plant resulted in the release of hydrogen.

As part of the developing situation in Ukraine, the U.S. government sanctioned many Russian goods and services, which included fertilizer before the Office of Foreign Assets Control rolled back restrictions and added a clause to specifically allow the import of agricultural commodities.

However, while it is apparent on paper that Russian fertilizers can begin to resume flowing into U.S. ports, there are several logistical challenges for importers to overcome, including payment and banking services as well as vessel chartering. As a result, it is not expected that Russian imports will immediately return to pre-Ukraine conflict levels in the coming weeks.

Ammonia prices in the U.S. are poised to remain firm, as the protracted conflict in Ukraine shuttered some foreign nitrogen production and supports higher commodity prices.

In a shock to the global ammonia market, $1,625 per metric ton (mt) cost-and-freight (CFR -- which includes the sticker price in addition to transport costs) was the price agreed by Yara and Mosaic for April at Tampa.

It was almost inevitable that Tampa would increase to such a level given the recent flurry of four-figure sales into northwest Europe, which became all too common following the Russian invasion of Ukraine, and the subsequent sanctions, which halted the flow of fertilizer from Russia.

Black Sea ammonia had effectively ceased all sales activity following the conflict, leaving Fertecon editors to maintain "no-market" assessments throughout March in the absence of any effective way to evaluate market pricing in the region. Baltic ammonia, meanwhile, jumped to $1,500/mt FOB, compared to high trades in February, which reached $1,120.

Higher prices are beginning to prompt resistance from buyers and a halt to the buying activity seen in recent weeks, however. Ammonia prices on the global scale are seen as more stable following the loss in demand due to the rapid price increases, but with serious supply issues to resolve.

New Orleans, Louisiana, (NOLA) urea barges rose to $900-$945/t FOB at the end of March, up from $525-$705 in February, although trading slowed significantly in the second half of the month.

The lull in activity was attributed to uncertainty in commodity markets with Russia's announcement of its intent to wind down military operations near the Ukrainian capital. Prices shot higher in the first part of the month and commodity prices spiked, but later calmed as the market digested the news of the invasion and fertilizer supplies that were lost.

River terminal urea offers rose mostly in line with the gains seen on urea at the U.S. Gulf, reaching as high as $935-$950/t FOB compared to February levels in the high $500s to low $600s.

Attention is focused on U.S. supplies ahead of spring applications, with year-to-date imports well ahead of the previous two years. But earlier talk about re-exports during the quiet period in January and February call into question exactly how many of those volumes will be available for in-season demand.

U.S. producers like CF Industries have been prioritizing ammonia and UAN production in recent months, which has also likely left domestically produced urea at levels lower than recent years.

In the short term, prices are expected to remain somewhat volatile and subject to market activity in India, Brazil and Russia. However, there could be more support once the weather turns and the U.S. begins trading on its own fundamentals.

With little business reported at the end of March and lower bids against a sales tender in Southeast Asia, market sentiment has begun to sour with a more-bearish tone evident as prices plateaued or edged lower.

Brazil was notably absent from the market for much of the latter half of the month as offers moved lower from $980/mt CFR to the mid-$900s for non-Russian urea by the end of March and were discounted to around $900 CFR for Russian.

Sales out of North Africa were nonexistent as offers remained at recent highs with no interest from traders. Prices ranged from $1,120-$1,130/mt FOB, sharply higher from $730 in February.

The market remained in limbo, waiting for India to step in for at least 1 million tons or more, with expectations that a new tender would be announced, providing a stabilizing force for the short term. Egyptian and Algerian producers are also comfortable for April and await further demand from Europe, as well as deep-sea markets depending on changes to Russian trade flows.

Alongside urea, March was also somewhat of a quiet month for UAN, with producers increasing prices despite little in the way of demand to speak of. Barges at NOLA, for example, were assessed higher to $620/t FOB for UAN32%, up from $545-$550 in February.

March was marked by incremental price increases not just at NOLA, but also in the U.S. interior with river terminal offers raised in line with barge values to $645-$650/t FOB. Terminal volumes had only just broken the $600/t mark in February. Offers at Cincinnati were, meanwhile, priced at a premium at the end of the month at $665/t FOB, before the other river markets were raised in line to $660 in April.

Last month also saw a revision to the U.S. import injury investigations regarding UAN from Russia and Trinidad. Dumping rates for the latter were nearly doubled, from 63% in January to nearly 112% in March, although the previous rates had already precluded any Trinidad UAN from being profitable in the U.S.

Also in March, Sen. Roger Marshall, R-Kan., and Rep. Tracey Mann, R-Kan., introduced the Emergency Relief From Duties Act, aimed at creating emergency waivers for duties on fertilizers by the U.S. International Trade Commission (USITC). If the bill makes it through the legislative process, it would create a pathway to establish a waiver of Countervailing Duty (CVD) or Anti-dumping Duty (AD) for one year if there is an emergency situation -- defined as including natural disasters, war, epidemics, labor disputes or major accidents -- according to a release from Marshall's office.

In the short term, we expect U.S. UAN and other nitrate prices to remain firm on global disruptions to production, high natural gas costs sustained in Europe, and strong domestic fundamentals heading into the spring season.

After seeing some softening prices in February, phosphate spiked higher in March to price levels not seen since 2008. Short supplies in the global market and rising prices in other import markets like Brazil supported the price gains, well before spring demand in the U.S.

DAP barge prices in March reached $960-$1,010/t FOB NOLA, up from $770-$775 for both DAP and MAP in February. MAP was assessed at a similar range to DAP of $960-$1,000/t FOB. The low end for both the DAP and MAP barge ranges were composed of Mosaic's first barge offerings after the producer had pulled its prices in late February.

Further along U.S. waterways, river terminal DAP prices ended March at $1,010-$1,040/t FOB, a month-over-month increase of more than $200/t. MAP prices varied wildly in March at anywhere from being discounted compared to DAP, on a basis of lower demand and more ample supply, while a total lack of activity in other markets prompted sellers to maintain a $10-$20 premium for MAP.

Chatter in the nitrates sector suggested any possible exceptions or suspensions of tariffs on UAN could also apply to the phosphate duties levelled against Russian and Moroccan-origin product in the past year. However, any of these efforts have yet to bear fruit and leave the U.S. market without a clear answer to where extra phosphate volumes could be sought in such a tight market.

With a protracted withdrawal of winter in the U.S. also underway, however, fewer days suitable for fieldwork this spring could also reduce phosphate needs.

Our price outlook for phosphates in the U.S. remains stable to firm.

Prices in the phosphate market remained on firm footing in March, bolstered by the conflict in Ukraine and the knock-on effect of higher prices with major exporters unable or unwilling to provide more supplies to the market.

Brazil MAP traded as high as $1,300/mt CFR by the end of March, after only just breaking the $900 mark in February.

In India, prices stalled in the $920s/mt FOB range, unchanged from February, due to the Indian government waiting to announce the new subsidy rates to be provided to each nutrient for the upcoming fertilizer year.

With the last DAP business of March concluded in India in the range $920-$926 CFR, the industry is expecting the government will consider increasing subsidy rates to mitigate the losses suffered at current import prices.

Concern about Russian supply, as well as raw materials from the Black Sea and Baltic to manufacture phosphates elsewhere, ultimately prompted an increase in demand for non-Russian material in several markets across the globe. World prices regarding phosphates are firm as a result, but cheaper prices for the Russian supply that is available may limit potential price hikes.

The loss of Russian tons from the export market had an additional knock-on effect to potash prices, and with Belarusian tons having previously exited the world market with no new avenue for shipping, prices shot higher in nearly all major buying regions.

In the U.S., NOLA potash barges ended March at $810-$835/t FOB, around $150 higher compared to $660-$670 in February. $805 had previously traded for loaded barges in the second half of the month and thought to be part of an export effort, while new sales and offers continued to move higher alongside increasing demand with the imminent onset of the spring weather.

River terminal potash followed the increases at the U.S. Gulf with a bit of a lag, crossing the $800 mark but with slower terminal activity making price increases less urgent. Most terminals had fit within a range of $800-$810/t FOB, with Cincinnati having seen prices up to $815. Prices in February had ranged from $690-$710.

Despite the lack of both Russian and Belarusian product in the U.S. in March, fears over supply shortages relating to potash were either lower priority or paled in comparison to the effect of the Ukraine crisis on nitrogen, as the U.S. did see river terminal prices retreat slightly in late March/early April on Canadian product.

Potash prices in the U.S. are seen stable in the short term with the potential to firm once spring conditions arrive. There is no easy solution in sight for the Belarus and Russian supply gap on the world scale, which could affect pricing with a firmer tone in the wider market for some time to come. 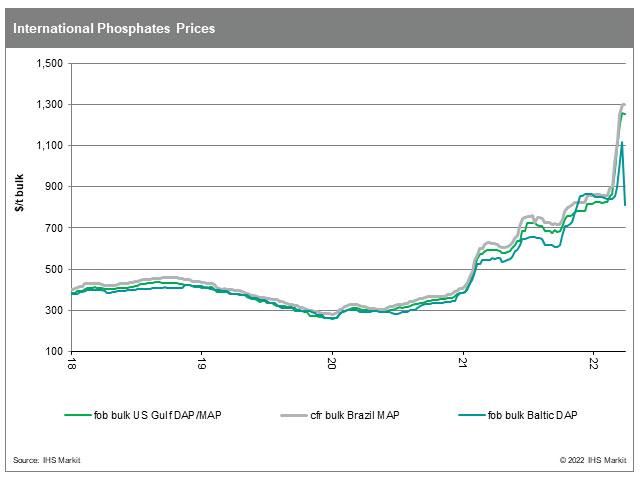