The retired educator likes to make a buck, but not at the expense of the environment and land his great-grandfather bought in 1884 near Slater, Iowa. In exchange for using conservation practices, such as cover crops and no-till, Tesdell gives farmers Mike and Charles Helland a break on cash rent on the land and the brothers can lease the property for as long as they want.

"I want these guys to make money. My long-term goal is to clean up the tile water leaving the farm and increase soil health," Tesdell said, noting farmers are less likely to help with conservation efforts if cash rent is too high and the land goes up for bid annually. Cooperation is "the only way forward that I can see."

If there's an ideal landowner-farmer/tenant relationship, Tesdell and the Helland brothers could be it. Conservation and government officials say their partnership, which values financial and environmental sustainability and stability, needs to be replicated over and over again to make meaningful and large-scale improvements to water quality and soil health.

"We tend to see more cover crops (and other conservation practices) where we have good tenant and landowner relationships or where farmers own the land they farm," said Sarah Carlson, senior programs and engagement director of Practical Farmers of Iowa. "The Tesdell-Helland relationship is a good example."

Tesdell and the Hellands said their mutually beneficial partnership, which has flourished for nearly four decades, is built on communication, friendship and trust. Tesdell's father, Loren, initially rented the farm to the Hellands and Lee continued the relationship after purchasing the property.

Establishing common goals is a must, they all agree. Tesdell wants to make money renting tillable acres, which he re-invests to make further improvements to keep soil productive for future generations. Profit potential is the main priority for the Hellands. The brothers are more than willing to help Tesdell thanks to a reasonable cash rent rate. Plus, the Hellands believe in environmental stewardship as well.

Tesdell and the Hellands declined to share details of the annual per-acre rent, which Tesdell adjusts based on commodity prices and input costs. But it's under the going rate where the average cash rent in Polk County averaged $245 per acre in 2021, according to the Iowa State University annual cash rental rate survey.

"Lee is a little different than a lot of landlords, since he's actively engaged in conservation projects," Mike Helland said. "If the rent is high and you don't know how long you're going to have (the land), you are not going to spend any money and time taking care of it."

Since 40% of U.S. farmland is rented, according to the U.S. Census of Agriculture, landowner-tenant collaboration is vital to achieve the water quality goals of many environmental programs and soil health initiatives across the country.

Mike Naig, Iowa secretary of agriculture and land stewardship, co-chairs the Gulf of Mexico Hypoxia Task Force. Working across 12 states, the group's goal is to reduce nutrient pollution in the Mississippi/Atchafalaya River Basin. Nutrient runoff from farms, mostly nitrogen and phosphorus, make their way into waterways and eventually the Mississippi River, which empties into the Gulf of Mexico. The pollutants are largely responsible for a hypoxic "dead" zone that's largely void of aquatic life due to the lack of oxygen in the water.

Naig has visited Tesdell's farm -- a popular spot to host conservation field days -- that showcases how conservation efforts co-exists with crop production. In- and edge-of-field conservation practices on the property, which take up 10 acres, include: grass waterways, terraces, three saturated buffers, three prairie strips and an underground woodchip bioreactor. No-till and cover crops are part of the annual cropping plan on all 65 tillable acres. Tesdell uses five acres for hay production.

Iowa's ag leader encourages all landowners and tenants follow the lead of Tesdell and the Hellands, and others like them, to cooperatively work together to ramp up conservation adoption. "(Tesdell-Helland partnership) is a good example of how this can work," Naig said.

As a result, Tesdell said harmful nutrient runoff from the farm is extremely low. Testing by the Iowa Soybean Association (ISA) shows nitrate levels of water treated by saturated buffers and bioreactors on the farm are usually 3 to less than 1 parts per million. The federal drinking water standard is 10 parts per million. The nitrate load in Alleman Creek, which Tesdell's land and drainage tile drains into, averages 11 to 12 ppm, according to ISA data.

"If the landlord is reasonable on the rent and wants you (tenant) to make money, you will be more apt to ... work with them on conservation efforts like cover crops," Mike Helland said. "Ultimately, the landlord benefits from long-term care of the land, but the tenant does, too."

Tesdall said the partnership has morphed into a close friendship, noting they talk regularly about the farm and ways to improve it.

"I have both on speed dial," Tesdell quipped. "The better relationship you have ... the more apt the tenant will treat your land like their own." 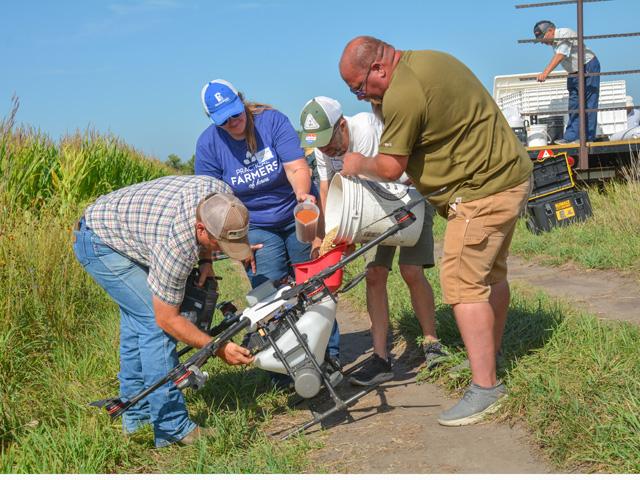