Editor's Note: This article includes updated information. The original can be found at www.dtnpf.com/agriculture/web/ag/crops/article/2022/02/03/six-management-tactics-tackle-tar.

ANKENY, Iowa (DTN) -- Tar spot is top of mind for many corn growers heading into spring planting, and seed companies are increasingly providing information about what hybrids can better tolerate the relatively new yield-robbing pathogen.

All commercially available corn hybrids are susceptible to tar spot, but some are more tolerant than others. Damon Smith, a University of Wisconsin associate professor and plant pathologist, said most seed companies have or are working on tar spot resistance ratings to help farmers pick hybrids to mitigate potential yield loss from the disease.

"The key is balancing yield and resistance, which can be a challenge for some companies," Smith said. "Farmers have to do their homework to see how good hybrids are to resisting tar spot."

AgriGold, an Indiana-based seed company, has provided tar spot tolerance ratings -- a scale of one to five, with one being the least tolerant and five the most tolerant -- for most of its hybrids for three years. Ratings are determined by company agronomists who study hybrids, which will be sold the following year, at research plots throughout the Corn Belt where the disease is prevalent. Based on collective findings, hybrids are rated accordingly.

John Brien, eastern agronomy manager for AgriGold, said tar spot dominated discussions at the AgriGold booth at Commodity Classic in New Orleans earlier this month, and at recent grower meetings. Hybrid disease tolerance has been and will continue to be a hot topic, he added.

"It can be such a devastating pathogen," Brien told DTN. "In 10 to 14 days, a crop can be destroyed by tar spot. It's so aggressive.

"We have an extremely high comfort level with (rating) new products coming out in tar spot environments," Brien continued. "It gives growers confidence that the products they are planting are either very good at (tolerating) tar spot, or they need to have a strong management plan in place."

Farmers can find AgriGold hybrids and tar spot ratings by going to its Hybrid Explorer webpage at https://agrigold.com/….

Burrus Seed, based in Jacksonville, Illinois, released tar spot ratings for 2022. Find them at https://burrusseed.com/…. Hybrids are rated on a scale of one to nine, with one being the least tolerant and nine being the most tolerant for tar spot.

"We thought it was prudent to provide growers with hybrid ratings," said Dana Harder, a field agronomist with Burrus Seed. He added that Burrus and other companies are working on selecting hybrids with greater tolerance to tar spot.

Tar spot will likely threaten corn this growing season just like in 2021, according to Smith. He delivered the prediction recently at the 2022 Illinois Fertilizer & Chemical Association Winter Convention in Peoria, Illinois.

Where and how bad the yield-robbing disease will affect corn will largely depend on the weather and crop management decisions, Smith said.

"I get lots of questions from farmers asking, 'Damon, are we going to have a (tar spot) epidemic in 2022?' You bet," he told farmers and chemical suppliers during a presentation about the disease at the convention. "The severity is going to be related to the (corn) hybrids chosen and the environment."

"The disease is here to stay," he said.

That doesn't mean tar spot is an uncontrollable monster guaranteed to slash corn yields and revenue. "It depends on how farmers manage it each year and being proactive in the future," Harder continued.

There are three ways to successfully minimize damage from tar spot if it shows up in fields, Brien said. Here are his management keys:

-- Knowledge. Farmers must learn about the disease, how it spreads, what it looks like and where it comes from.

-- Hybrid selection. There are no tar spot-resistant hybrids available, but some are more tolerant of the pathogen than others.

"It is a new disease that everyone will have to manage for in the near future," Brien said.

THE SKINNY ON TAR SPOT

Tar spot first showed up in Illinois and Indiana fields in 2015, but quickly spread throughout most of the Corn Belt and into a few East Coast and Southern states. It has even reached Canada.

According to the Crop Protection Network (CPN), tar spot commonly occurs throughout the Caribbean, Mexico and Central and South America. Smith isn't sure how it arrived in the United States.

Tar spot is caused by the fungus Phyllachora maydis. The fungus produces small (1/16-3/4 inch), round to irregular round and/or diamond-shaped, raised black structures called stromata. These structures form on both the upper and lower surfaces of corn leaves. In severe cases, stromata may also be observed on leaf sheaths, husks and tassels.

"These conditions drive epidemics," Smith said. "But areas that struggle with not enough water, those are not high tar spot environments."

The pathogen reduces yields by limiting photosynthetic capacity of leaves and causes rapid, premature leaf deterioration and death. Yield losses can be minimal to none or 50 bushels or more per acre, according to CPN.

Inoculum overwinters on corn residue. It can survive extreme cold and heat. Rain and high humidity cause the stromata to release spores that are dispersed by rain splash or wind. Spores can be dispersed in-field and locally. In other words, it's a hardy, highly transmissible disease.

"It keeps radiating outward each year and expands its territory," Smith said "In Wisconsin, I'd say 96% to 97% of our corn acres are infested."

Larry Buss, a farmer from Logan, Iowa, feels fortunate the disease hasn't shown up in his fields in west-central Iowa and east-central Nebraska yet, but he predicts it's only a matter of time. Knowing tar spot has affected corn in nearby fields, Buss formulated an action plan this year to mitigate yield loss.

"My plan of attack is to talk to my seed salesman about hybrids that not only yield well but are disease resistant. I will also scout and treat with fungicides in a timely manner when needed," he said.

There are several fungicides with 2ee labels that can be used to manage tar spot, according to CPN.

Smith said recent research at the University of Wisconsin and other land-grant institutions shows spraying fungicides with two or three modes of action works the best against tar spot, though one mode of action still provides some efficacy compared to not spraying at all.

Application timing is critical, Smith continued. Research indicates fungicides are most affective during the VT to R3 growth stage. Since the pathogen is polycyclic -- it continues to produce spores and spread to new plants as long as environmental conditions are favorable -- multiple fungicide applications may be needed.

"Some products keep the disease in the lag phase longer, and that's where we (preserve) yield," he added.

1. Manage irrigation. Reducing the frequency and duration of leaf wetness may reduce disease, according to CPN. Excessive irrigation or frequent, light irrigation may increase disease pressure. However, CPN indicated there is limited research on the impact of irrigation on tar spot, and farmers who rely on irrigation should consult an agronomy specialist to determine how irrigation may influence disease development.

2. Rotate crops. Crop rotation seems to only play a minor role in reducing risk of tar spot, according to CPN. However, this practice will allow residue to decompose and reduce the primary inoculum.

3. Manage residue. Tillage can help, but it appears to only play a minor role in reducing risk of tar spot, Smith said. Tilling fields buries infected residue and increases the rate of decomposition, which may help reduce the amount of overwintering tar spot inoculum in a field but will not reduce the risk of infection from locally dispersed inoculum.

"I don't think we should just moldboard plow," Smith said.

4. Scout for tar spot. Keeping a watchful eye on corn can help farmers apply fungicides when needed and be prepared to harvest heavily diseased fields early if stalk integrity is questionable to avoid lodging. An online tool tar spot prediction tool called Tarspotter can provide risk analysis of the disease in certain areas. Learn more about the free Tarspotter app and how to download it on smartphones at https://ipcm.wisc.edu/….

Read a DTN story about tar spot's 2021 epidemic and five takeaways from the season at www.dtnpf.com/agriculture/web/ag/crops/article/2021/09/28/five-takeaways-tar-spots-big-year. 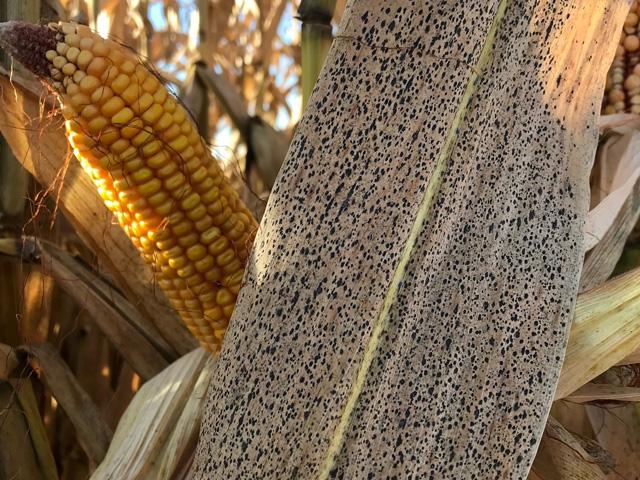