ROCKVILLE, Md. (DTN) -- For some insects, another year of hot, dry weather could create the perfect conditions for a lively family reunion.

Expect grasshoppers, spider mites and soybean aphids to thrive in droughty areas this spring and summer, crop scientists warned growers in a University of Minnesota webinar on March 2. Not only do these insects do well in drought-stressed crop fields, but -- as cold-blooded critters -- high temperatures speed up their development.

As temperature rise, aphids and spider mites can shorten the time between new generations, which allow their populations to ramp up quickly, said Ian MacRae, Extension entomologist with the University of Minnesota.

"All of a sudden what was a small population yesterday may not be small today," MacRae warned. "So, if we start out hot and dry, scouting will be incredibly important in keeping track of what populations are doing and when you should be treating those populations."

That's because, unlike their aphid and mite colleagues, grasshoppers can only develop one new generation of insects a year. It takes time for them to build to damaging levels, and just one year of unfavorable conditions could disrupt that process.

Unfortunately for regions like the Northern Plains, which have seen two dry seasons in a row, farmers there may be poised for a serious outbreak of this fast-moving defoliator.

"If we do have another warm, dry spring, we're going to have a lot of grasshoppers," MacRae warned, noting that a lot of egg laying occurred in the fall in northwest Minnesota and the northern Red River Valley.

"There's a lot of eggs out there, and we had good snow cover and they are also deep enough in the soil that they are not going be affected by the low temperatures we had this winter," he added. "So, if we have a dry spring, we're probably going to have a successful hatch."

See more on grasshoppers from the University of Minnesota here: https://extension.umn.edu/…

Soybean aphids can do well in hot, dry conditions, but they run into natural limits. They like heat and will speed up reproduction in temperatures ranging from 75 to 80 degrees. But they slow down as temperatures crest 90 degrees, and in cases of severe drought, colonies will suffer, noted Bruce Potter, University of Minnesota Extension IPM specialist. As soybean leaves flip upside down to try to conserve water in scorching afternoon hours, they expose aphids attempting to shelter on those undersides, he noted.

The real key to a successful soybean aphid invasion lies in the springtime, when the aphids move from their overwintering home in buckthorn plants into soybean fields. If they experience warm, dry conditions at that time, and find decent soybean canopies, they can take off, Potter noted.

"Usually by June, we have a pretty good idea how well that movement into soybeans is happening," he said.

In long, hot summers, aphids and spider mite infestations can overlap and co-develop, Potter added. "You might start with soybean aphid problems and transition into spider mites later on," he said. "And in my experience, the spider mites usually win out."

That's because spider mites love a good late-summer roasting. As temperatures crest 75 degrees, it takes only five days for a hatched mite to become an adult. They also favor oven-crisp levels of dry air, MacRae said. "Spider mites actually prefer to reproduce as it gets drier," he noted.

The heat also helps mites and aphids by hampering the naturally occurring fungi in the field that prey on insect pests, MacRae noted. "The fungal diseases that control insects are cut down, so you get a larger starting population," he explained.

Watch for spider mite populations carefully as crop fields approach reproduction stages, added Potter. "Once those plants are in reproductive stages and facing hot, dry weather, that's when things really take off," he warned. The mites set up camp in soybean canopies and suck the sap out of leaves, leaving a bronzed, speckled appearance.

You can find archived version of this University of Minnesota webinar here: https://extension.umn.edu/…. 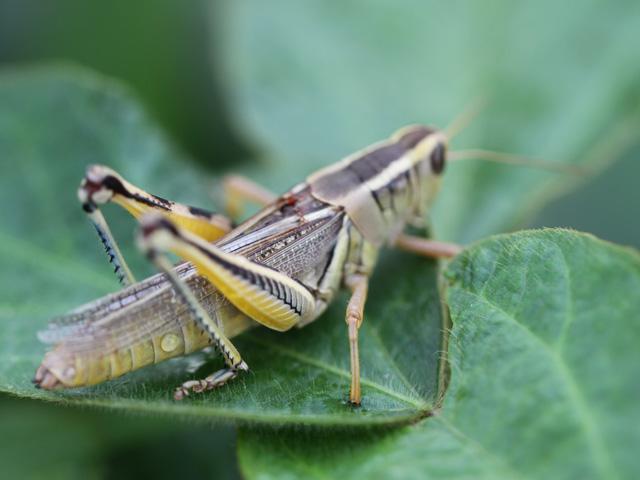