Iowa farmer Jay Magnussen, who also works as an agronomist and purchasing manager for Archer Co-op, has been allocated only 20% of the glufosinate he ordered for the co-op, at more than double the wholesale price he paid last year. Glyphosate is in slightly better supply, but with prices around $60 per gallon, he has customers cutting back on its use.

"Most of my farmers have backed Roundup out of their corn program," said Magnussen, who farms near Paullina, Iowa. "When it was a $4/acre-decision, it was easy. When it's a $14/acre-decision, they'll try to get by without it. They will spray their corn as if it's conventional [non-GM]."

The issues that led to these widespread pesticide shortages are complex. Analysts point to continued pandemic production disruptions, labor shortages, shipping costs and delays and lingering effects from severe weather last year. What does seem clear is that the pesticide shortages and their accompanying price spikes are here to stay in 2022, DTN found in interviews with analysts, farmers, retailers and agrichemical companies.

Glyphosate and glufosinate remain the most affected active ingredients. Both are in high demand, with glyphosate remaining the base of many weed control programs and glufosinate now a post-emergence spray option for all the major herbicide-tolerant soybean varieties on the market. But, overall, year-over-year prices are up for most ag chemical active ingredients, including fungicides and insecticides.

As growers head into the spring, the risk of pesticide prices drifting even higher appears greater than the chances of them falling, said Sam Taylor, executive director of RaboResearch.

"That's largely because the downside risk is predicated on something unpredictable like a weather event limiting acreage or demand," Taylor explained. Farmers and retailers holding on to or even hoarding ag chemicals in greater amounts than are known could also be a price softening factor. But the factors keeping prices high -- shipping backlogs, labor disruptions hitting the ports, trucking industry and production facilities, China's continued zero-COVID policy -- are simply "more plausible impacts at this point," Taylor concluded.

Where does it end? China's zero-COVID policy, which is aimed at eradicating the virus and could continue to force sudden production facility shutdowns, remains the biggest known risk to future supplies, Taylor noted.

But most likely, sometime in 2023, the acute nature of current shortages should ease, and we could see an abrupt "bullwhip" effect of swinging from scarcity to abundance, he said.

"If retailers keep buying things up, and farmers hoard what they can, then all of the sudden, there will be a massive fall-off in prices when farmers have enough," he noted. "And that could happen in 2023."

Liberty registrant BASF told DTN the company is working to increase production and keep up with growing demand, while struggling to overcome the same supply chain chaos entangling most major industries right now.

BASF expected a 30% year-over-year increase in demand for its Liberty herbicide, based on the growing adoption of Enlist E3 and XtendFlex soybean varieties, which both tolerate over-the-top applications of glufosinate. "But that has been challenged by global supply shortages and disruptions, much of which is far outside BASF's control," said Robbie Upton, BASF's director of marketing for the U.S. Crop. "Raw materials, transportation logistics, pandemic-related delays -- all these are factoring in. Even though we planned for that increased volume, we see that it won't be possible to deliver all that we had hoped for because of those disruptions."

BASF is investing $260 million into North American production capacity, Upton noted, with $150 million of that dedicated to herbicide formulation and production. Specifically, the company is adding a new domestic formulation production site, expected to come online in the spring, and recently used 300 planes to move ingredients to North America from overseas, bypassing the seaport backlog, the company said in a media release.

But these efforts are unlikely to affect production of Liberty in time for the 2022 spray season, Upton noted. "I think it would be too optimistic to promise any kind of volumes for this growing season," he said. "But our anticipation is that it will be ready to go for the 2023 season."

At issue is glufosinate's heavy supply chain exposure to China, Taylor noted. "The pricing in the Chinese market, at the manufacturer level, is 100% up year-over-year," he noted. Add to that the inflated costs of shipping, land freight, and scarcity, and the result is customers facing soaring farm-gate prices, from $100 per gallon up to $130 per gallon, according to DTN's reporting. "Local retailers and smaller co-ops without the big purchasing power will have the most shortage of availability," Taylor warned.

For its part, Upton said BASF has worked hard not to raise its prices, and even left them flat last year, although they did have to increase them this year to cover the increased costs of accessing ingredients and transportation. "BASF certainly does not set retail pricing," he said. "I think the extreme price increases people are seeing are very much a function of supply and demand ... We're definitely not increasing prices at that level."

Magnussen said for now, he is holding back his 20% glufosinate allotment from his wholesaler, in the hopes that it will be available for his customers who need emergency weed escape clean-up applications in June. "If I sold Liberty to the first three guys who walked in, they would have taken my supply entirely," he said. "I guess maybe more will shake loose, but I can't know when exactly."

WHERE GLYPHOSATE GOES, THE MARKET FOLLOWS

In an emailed statement to DTN, Bayer warned that the pandemic and severe weather events of the past two years are likely to continue to challenge their industry throughout 2022 and beyond, with Roundup prices at the mercy of those global whims. "We price our Roundup agricultural herbicide dynamically, meaning that at any time, the price can track upward, or downward, based on prevailing market prices both in China and within the U.S.," the company's statement noted.

Glyphosate has seen one of the biggest price hikes in Chinese markets, Taylor noted, up 177% year-over-year, but those prices have flattened out recently.

"Production is picking up a little bit in the North American market," he noted, after disruptions from Hurricane Ida in 2021. Magnussen said he was pleasantly surprised to get a final shipment of ordered glyphosate from his wholesaler a month earlier than predicted.

But farmgate prices remain stubbornly high, ranging from $45 per gallon to as high as $80 per gallon, according to DTN's reporting. And glyphosate's scarcity is pushing up the demand for other herbicide active ingredients, as farmers work to find alternatives, or beef up their burndown and preemergence applications.

"Glyphosate remains the big beast in the global room," Taylor noted. "When it is up materially, that reflects throughout the industry."

For example, demand for clethodim (found in products like Select Max), is up substantially, as soybean farmers in particular add it to their program to battle grasses in the absence of glyphosate, Magnussen noted. That chemical's prices in the Chinese manufacturing market were up 125% year over year, Taylor noted.

Demand for fungicides and insecticides is a more fluid situation, as disease and insects aren't as predictable as weeds, Magnussen noted. But he stocks the co-op with some reliable active ingredients each year and has noticed a 10% to 15% price hike for most of them. High use insecticides such as bifenthrin and imidacloprid are up in the Chinese market, 75% and 110%, respectively, Taylor said. Fungicides were slightly lower, with actives such as azoxystrobin rising 50% at Chinese ports. 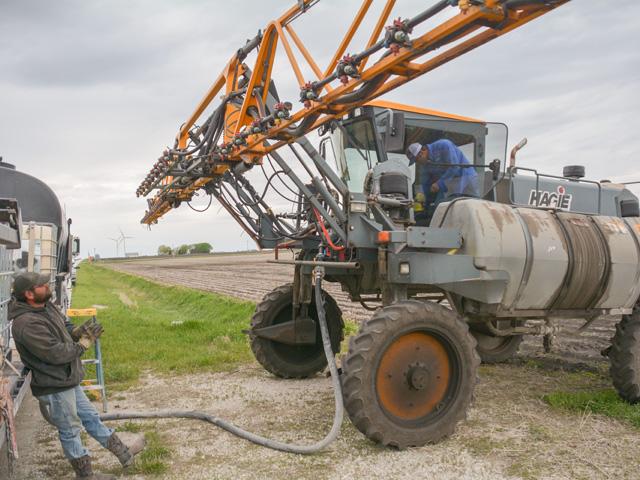