ROCKVILLE, Md. (DTN) -- "If you know yourself but not the enemy," the old saying goes, "for every victory gained, you will also suffer a defeat."

To be fair, Sun Tzu, the Chinese military general who wrote that in his famed text, The Art of War, probably didn't have weeds in mind.

But the ancient lesson -- know your enemy or else! -- translates quite well from the 5th century BC to farmers' modern struggles with weeds. If you want to deploy your arsenal of tools against weeds effectively, you need to get to know each weed species in your field intimately, said Tom Peters, an Extension agronomist and weed control specialist with both the University of Minnesota and North Dakota State University.

"For me, weed management is about fundamentals -- it's about learning about the plants," said Peters, who spoke during a University of Minnesota webinar on February 2. "It's about trying to study how waterhemp is different than kochia or common ragweed."

"That's a task that I'd like everyone to work on during the winter," he said.

So brush off those old biology textbooks, or -- more likely -- open your Internet browser of choice, and study up on these five characteristics of your personal Public Weed Enemy Number One (and Two and Three).

Weed identification is as basic as it gets, but it's not easy, Peters admitted. "I will tell you that it is a lot different identifying weeds in the field than it is in the greenhouse or looking at pictures on the computer," he said. "Please get help if you're not sure what weeds you're looking at."

That help might come in the form of a crop consultant, an Extension agent or educator or one of your ag service providers, he said.

Not all weeds are created equal. They emerge at different times, grow at varying rates and produce different volumes of seed, which can survive for a broad range of time in the soil.

Get acquainted with the life cycle of each major weed species on your farm. "Make sure you can anticipate those weeds and look for them on your farm," Peters said.

Emergence patterns can give farmers valuable windows of time to target one species of weeds, before another one demands control. "Maybe you'll find you don't have to worry about kochia after early May, and you can focus on other weeds," Peters said.

In contrast, weeds with long emergence habits, such as waterhemp, will require diligent, season-long attention. "Once waterhemp starts germinating it will continue to germinate and emerge from May through August," Peters noted.

Close attention and note keeping on weeds' emergence patterns might uncover important changes that will affect your management plans. For example, it appears some populations of velvetleaf and cocklebur have started stalling their emergence until later in the summer, to dodge common postemergence application passes. (See more here: https://www.dtnpf.com/…).

Part of the reason weed identification is so tricky is that some weeds have to think outside the box or, rather, the plant, when it comes to reproducing. Kochia plants, for example, can have imperfect flowers, which lack both male and female parts, which means they rely on cross pollination to reproduce. Waterhemp only produces male or female plants, so they also have to cross-pollinate with plants around them.

This pollination mixing and matching creates extensive plant diversity, Peters explained. Weeds with this kind of genetic diversity can have varying appearances and other important plant characteristics, such as germination and emergence timing or herbicide resistance traits.

There is a tremendous range of seeds each weed species can produce. Some, like cocklebur, might only put out several hundred seeds per plant, while others, such as waterhemp or Palmer amaranth, can pack hundreds of thousands of seeds into a single female plant. Even little baby waterhemp plants, just a few inches tall, can crank out 5,000 to 6,000 seeds a year, University of Minnesota Extension weed scientist Debalin Sarangi noted on the webinar.

"If you let waterhemp go to seed in your field, you're going to get hundreds of thousands if not tens of millions of weed seeds in your field," Peters said. "So, the penalty for lack of weed control is really tremendous."

Seeds have another diverse characteristic -- longevity in the soil. Some have almost biblically long endurance, with researchers estimating it takes 78 years to reduce lambsquarter germination rates by 99%.

More moderate seed survivors, like waterhemp seeds, can persist for four to five years. "So, the challenge is that if you don't get good weed control in say, year three, then you're right back at the beginning again," Peters said. "You've got to put together consecutive, strong control programs across multiple years."

Others, like giant ragweed, only last about two years. Kochia seed is especially short-lived, often only surviving a single year, but its tumbleweed wanderings make the most of that fleeting life.

Remember that although germination rates might drop over the years, even a small percentage of seeds coming up can cause problems. "For waterhemp, we always say the seed bank is 98% exhausted in four years, but think of that plant's incredible seed producing ability," Sarangi warned. "Two percent of millions of seeds is still a lot of seeds!"

For more information on this University of Minnesota webinar, see the webinar series page here: https://extension.umn.edu/….

For a discussion about the worst weeds in the patch and review of John Cardina's book: Lives of Weeds: 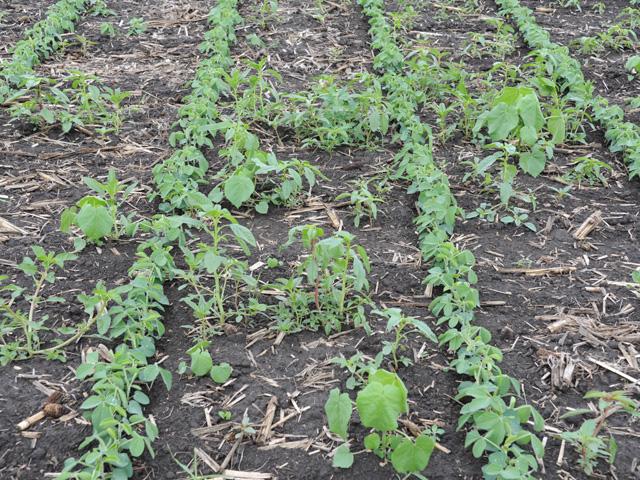