DECATUR, Ill. (DTN) -- All Alex Millershaski wants for Christmas is some rain to give his wheat crop a fighting chance. The winds that blew through the Kansas wheat belt last week scarified the soil surface in many areas, leaving behind questions about how wheat will fare.

"They always say wheat has nine lives or more," said Millershaski, who farms near Ingalls, Kansas, in the southwest corner of the state. "We're so dry that it's hard to predict what will happen to the crop right now. A little rain -- even a half inch -- would go a long way toward helping recovery."

Jeanne Falk Jones, a Kansas State University agronomist stationed in Colby, in the northwestern part of the state, acknowledged that wheat has incurred damage, particularly where the winds blew hard enough to expose crowns and remove residue.

"Anytime the wheat plant is damaged, we know we need to give it some time to recover," she said. "Farmers that have concerns could dig up some plants and bring them inside to see if they respond to water. But my thought right now is don't rush to snap judgements."

DTN Ag Meteorologist John Baranick said more wind is headed to the Plains region. A low-pressure center is forecast to move through the Northern Plains and Upper Midwest late Thursday and Friday. "The cold front to the system will quickly sweep across the Plains and winds both ahead and behind it could be strong," Baranick said. "It is going to depend on timing. If it moves through during the night, there is less of a chance for anything strong. But there's a potential for wind gusts of 40-50 mph for a time late Thursday through Friday morning across Kansas, Colorado, and the Oklahoma and Texas Panhandles."

Unfortunately, he doesn't see much rain in that forecast.

"Models generally keep the whole region dry -- a region that is thirsty for rain," he added. The growing drought was partially responsible for the dust storms that developed with the system last week. There should be some concern that if winds do gust this high, there could at least be some more soil erosion, though another dust storm would be hard to do."

Not even covered land held up to the battering, Millershaski noted. "I have wheat planted into a nice thick oat cover crop that now looks like clean-bladed fallow -- it's just bare dirt.

Corn residue was pulled from the ground.

"We were just so dry. With no moisture left in the residue, it becomes light and fluffy and just blows," he said. "Even fields that were harvested with stripper headers and the residue left standing tall blew out in some areas. It was just incredible."

The words Kansas and wind are nearly synonymous, but even those who have endured other dust storms found conditions that hit Dec. 15 extraordinary. Clay Scott, who farms in southwest Kansas near Ulysses, blamed drought and static electricity for hurting a portion of his crop.

"I've seen it happen before along field edges, but never to this extent," said Scott. He explained the severe drought coupled with physical damage from sand or soil blasting exposed the plant to even more dehydration and interrupted the transport of water through the plant. Sand, soil and other debris blowing across the ground created an electrical current, which eventually built into a static charge, he explained.

"We've had 60- to 70-mile-per-hour winds before, but nothing that lasted five to six hours," Scott said. "We were also at 5% to 10% humidity, and when you couple that with those kind of winds for that long, it's kind of like the static you get rubbing against a balloon." Scott added that plants and trees in the yard around his home are also showing similar symptoms.

"We were so dry that the prognosis wasn't that good before the wind," he said, noting the region has been in a drought since November 2019 according to the National Drought Monitor. "But now we've lost all of our cover and residue off our crop," he said. "When you walk across your yard, it's just dust and the forecast isn't looking good."

Scott said he's started to chisel some fields to try to throw up clods big enough to try to stop more soil from moving. "Historically, most of our bad weather happens in the later part of February and March. So, we've still got another 90 days of this to go through. We're going to do everything we can to stop erosion and dirt from blowing."

A Kansas State publication called "Emergency Wind Erosion Control" can be a resource for farmers with fields that have more soil exposed because of the loss of residue and may have fields that "blow" in the next high-wind event (soil particles dislodging from the soil surface and blowing away). These fields could be candidates for emergency tillage to help pull up clumps to minimize the small soil particles from moving, according to Falk Jones. Find that resource here: https://bookstore.ksre.ksu.edu/….

Wheat is a grass and can endure a lot, Scott agreed. "But there's wheat that is covered up with drifts of dirt and wheat that has exposed roots from being blown out, and everything in between. A good rain would definitely help, but it's got to come soon.

"My guess is every time we get a hard freeze, we're losing a little bit more of the crop because we've lost the crown protection and residue. A lot of guys here waited on moisture to plant because we didn't have enough moisture to germinate and the rains never came," Scott said.

He added that while the area often struggles with rainfall deficits, the soils are rich and capable of producing impressive wheat yields, especially when irrigated. "We have wheat circles that were no-tilled into 200-bushel or better corn stalks. In areas where the wind was bad, the corn stalks blew away down to bare dirt," he said.

Millershaski said nearly every acre around his farming area was battered, but fields positioned to the south and west of cornfields took more of a beating. "Those stands that had cornstalks blowing across them really look rough," he noted.

Farmers in the central part of the state are also struggling with dry conditions but felt they may have fared better after the wind events. Joshua Svaty, Ellsworth, Kansas, said the gusts that blew through central Kansas were no less severe, but perhaps did less overall damage to the wheat crop.

"I have to think our slightly more rolling topography, trees and other things helped protect our part of the universe. We aren't quite as exposed as those flat open areas to the west of us," Svaty said.

Still, the lingering drought brings lingering questions. "This is different than anything we are used to. With moisture wheat could recover, so I don't think our crop is lost by any means. The problem is there's nothing (rain) on the horizon, and that's a big concern for us right now," he said.

Svaty said the drought conditions and higher prices encouraged him to plant more wheat this fall. "Winter wheat still has a better shot at handling dry conditions than a spring row crop -- even milo," he noted.

Millershaski holds the memory of the 2020 crop in his mind to stay positive. Substantial rains came in May and just in the nick of time to help produce the best yields he's experienced as a young farmer.

"It's hard to romanticize the crop looking at it right now, but last May after those rains, it was paradise here. I like how wheat keeps the ground covered nine months out of the year and leaves a thick stubble. It's a good crop. I just hope we can get the rains we need to turn it around this year," he said.

For more information on the weather patterns that caused wind damage, go to https://www.dtnpf.com/…. 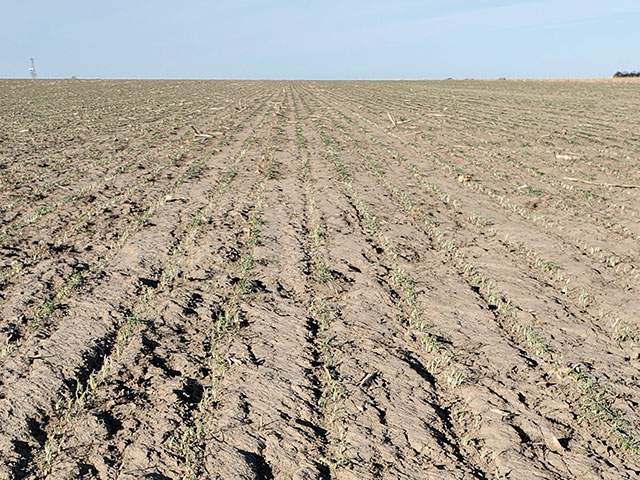