DTN/Progressive Farmer first reported on the rise of prescriptive tillage in early 2021. Read a Progressive Farmer cover story on the subject at www.dtnpf.com/agriculture/web/ag/magazine/article/2021/01/01/cover-story-groundbreaking.

Case IH continues to conduct research studies and host field days on its Advanced Farming Systems (AFS) Soil Command prescription tillage technology. John Deere decided to make its fully integrated TruSet Tillage technology standard equipment on most tillage tools this year. Both technologies give farmers the option to use prescriptions to automatically control tillage implements or do it manually.

Representatives for Case IH and John Deere say adoption of prescriptive tilling has increased in the past year, due in part to decisions each company has made to promote the technology. However, neither ag equipment manufacturer could provide specific numbers.

"Prescription tillage is becoming more and more popular," said Ryan Jardon, John Deere go-to-market manager for large tractors and tillage. "The popularity has increased so quickly ... customers were asking for it on every tool. Farmers want to maximize production on the ground they have and be good stewards of the land."

He added that sales and use of technology will continue to increase "as more and more customers find out they have that ability and see the advantages."

Tillage prescriptions work on the same principle as other precision agriculture prescriptions farmers create for fertilizer and chemical applications and planting. Prescriptions are written and uploaded to a tractor's computer, which automatically adjusts a tillage tool's settings as it moves across the field.

Adjustments could include the depth of shanks and disks, the gang angle of disks and down pressure of wings and rolling baskets.

A prescription could call for more aggressive settings in areas of a field to alleviate compaction or slice and dice and bury residue. Weed control and leveling ruts could also require disks to run deeper or be angled more.

In parts of a field with light, highly erodible soil, a prescription could adjust a tillage tool to be less aggressive or not engaged with the ground to minimize erosion. More residue would be left on the surface.

"We have growers that want different things," said Alison Bryan, Case IH tillage research agronomist, referring to tillage outcomes. "A prescription can be simple or complex based on field needs. It can be based off of soil maps, topography, compaction and yield data to create different tillage zones."

A conventional-tillage study Bryan led in March of 2021 featured a Case IH Ecolo-Tiger 875 disk ripper pulled by a Case IH 340 Magnum tractor in several fields totaling 200 acres near Elizabeth City, North Carolina. Each field was divided so half was ripped at a constant 14-inch depth and the other half used a prescription to vary shank depth from 5 to 14 inches.

Extensive soil assessments were done, along with utilizing yield data, to write a prescription so shank points were 1 inch below compacted areas to eliminate the problem. "That's very important to producers since compaction can reduce yields 10% to 20% (or more)," Bryan said.

She continued that efficiency increased significantly with variable-depth prescription tillage compared to a constant depth.

"We saw a nearly 10% enhancement in productivity of acres tilled per hour since you could go faster in areas where tillage wasn't as deep. Less fuel was also used," Bryan said, though specific fuel savings weren't provided. "This is very valuable to growers when work windows are tight."

Bryan conducted a conservation tillage study in August of 2020 in a hilly field with wheat stubble and some highly erodible soil near Racine, Wisconsin. A True-Tandem 335 vertical tillage tool was used. A prescription was written to vary tillage depth from zero inches to 2.5 inches depending on elevation, soil type and erodibility and yields. The goal was to prevent erosion where needed, manage residue and create a consistent seedbed.

"I get to show farmers the value of prescription tillage," Bryan continued, noting the conservation prescription worked as intended.

John Deere was the first company to offer prescription tillage technology in 2016. Its technology remains virtually the same. However, adoption has grown to the point the company is not only offering TruSet Tillage technology as a standard equipment on new tillage tools, but also as an upgrade kit for older Deere rippers, vertical-till machines and more.

"That's a testament to how steady the technology is and how much customers are embracing it," Jardon said. "It really gives farmers the opportunity to dial in a tool for what they want to do in a given spot."

TruSet requires a GreenStar 3 or Generation 4 in-cab display and a GPS receiver. For non-Deere tractors, a Gen 4 4640 universal display is compatible.

Case IH dealer Redline Equipment in Bowling Green, Ohio, held a prescriptive tillage demonstration for customers at a nearby farm in September 2020. Derek Hetrick, a Redline salesman and farmer, said attendees were mostly impressed with the technology as they watched a ripper and vertical tiller automatically make adjustments on the go based on prescriptions written and uploaded in the field.

Since the demonstration, he's sold a ripper and a couple vertical-till machines to farmers so they could prescriptively till. He's also planning to use the technology on his farm.

"Farmers like the efficiency and consistent seedbed that will lead to better plant populations and even emergence," Hetrick added. "That will help yield." 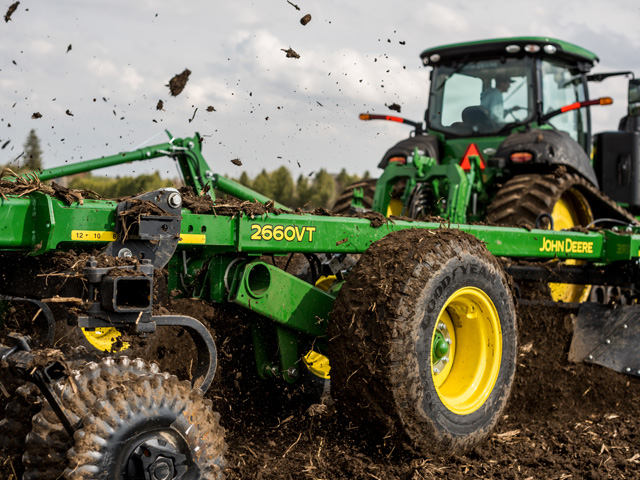