"We'd been active in water conservation for years, even before hosting the technology farm," Speer explained. "The Equus Beds Aquifer has plentiful water reserves compared with other parts of the High Plains Aquifer, farther west in our state, but because of naturally occurring salts in the area associated with the nearby Arkansas River and salt deposits northwest of us, it's a highly saline water source."

"We need the water but want to limit how much we use because of the chlorides it contains," he said. "Because of that, we're trying to reduce irrigation use like our counterparts out west, but in our situation, it is to prevent salt buildup in the soil, not to work around depleting the aquifer."

To keep tabs on the soil chemistry, along with nutrient levels and organic matter content, grid soil samples are taken on 25% of the farm every year on a rotation basis, Speer explained.

He said they've had good results conserving water for years by adopting low-pressure sprinklers equipped with wobbler nozzles to increase water droplet size (for resistance to wind-caused evaporation and plant-damaging salt deposits on crop leaves) and LDN (low-drift nozzle) drops that placed the nozzles within 2 feet of the field surface. Soil-moisture probes have also played a part in the farm's overall water-use efficiency.

"Despite our successes with the drops, nozzles and moisture probes, about five years ago, we introduced Phytech direct-plant sensors to the farm, and they changed the way we irrigate," Speer said.

"It just makes a lot of sense to consult the plant," he added. "You may have water in the soil, but the plant still may be stressed. It's much better to listen to the plant than rely solely on monitoring soil water levels."

Speer recalled the early experience with the monitors that convinced him of their worth.

"It was hot weather in June, and we were busy trying to keep the corn watered on one circle by making a 0.90-inch pass with our 700-gallon-per-minute application rate," he said. "The monitors showed us we still had stress on the corn.

"We sped up the pivot and put on half-inch passes so the pivot would get back and cool the crop, thereby reducing the stress we were seeing with the shrink and swell of the corn stalks," Speer continued. "You would have never picked up that stress with a soil-moisture probe. The plant monitor registered the stress long before it was visible, and if it's visible, you're already losing yield."

"The beans were flowering and setting pods, and we knew there was not a moisture problem in the fields; but the plant monitors were registering crop stress," he explained. "When I inspected the area around the sensors, I found woolly bear caterpillars defoliating the canopy. The insects were causing the stress, and the swell and shrink measurements were catching it."

Speer said at first the watering recommendations from the plant-based sensors and their computer's algorithms frequently went against his better judgment, but they ultimately won him over.

"Typically, we would water corn up to pollination to meet the plant's highest water-consumption period," he explained. "We'd try to get ample moisture in the soil and hold it at that level."

The first year the monitors were in use, Speer said he compared a direct-plant-monitored circle with an adjacent circle of similar soils and identical hybrids, and planting dates managed conventionally with 0.90-inch watering passes.

"I was uncomfortable throughout the season because the monitors were calling for less water than I thought was needed," he explained. The technology vindicated itself, however, when Speer tallied up an 18-bushel-per-acre yield increase in the monitored circle, along with a water reduction of 4 to 5 inches for the season.

"The differences in pumping costs were not significant, but we did use less water. So, with increased yields and less pumping, I became a believer," Speer said.

"The monitors also taught us we were watering corn too late into the season," he added.

"At our July 24 through 25 field day, the plant-based monitors said no more water was needed, so we stopped irrigating," Speer recalled. "People were freaking out that we'd quit watering, and many growers in our area watered two to three times after that date. On our farm, the system showed us the corn was happy, so we were able to successfully end our watering season early."

In 2020, however, he was using the monitors on soybeans and said they may have called for one more irrigation than he would have made normally. However, he was pleased with the 86-bushel-per-acre yield.

"I'm going to follow the system's lead on soybeans even though it seems to be a little bit more sensitive on beans than with corn," Speer explained. "Sometimes, it calls for less water than I think is necessary, and sometimes it calls for more.

"I'm very comfortable with the Phytech system on corn, but I'm still working on my comfort level with it in soybeans," he added.

Speer said with volume discounts, the plant-based sensors, related computer hardware and reporting service cost about $950 per circle in his area compared with up to $2,000 for some competing soil-moisture monitoring probes.

"The service provider installs the system each season, usually placing monitors on six plants per circle and installing the system's computer at the pivot point," he explained. "Each system is calibrated to the farm's soil types and usually receives several software updates over a season." Visit www.phytech.com for more information. 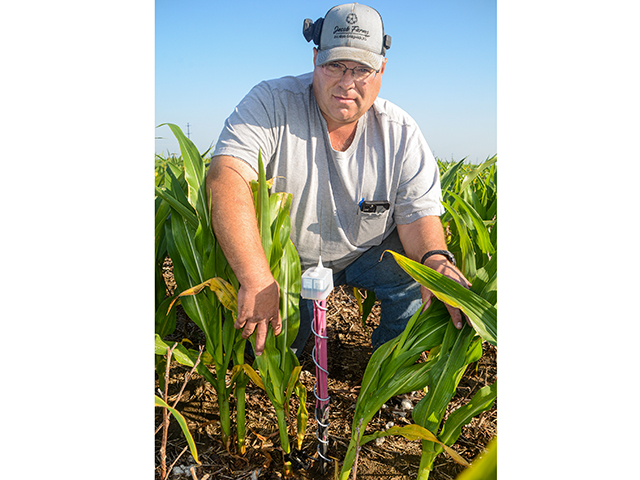