ANKENY, Iowa (DTN) -- Mike Morgan has waged an all-out war on weeds for years in his Piggott, Arkansas, fields. He may be finally winning.

The main enemy is pigweed, particularly Palmer amaranth. The key to victory, Morgan said, is doing whatever it takes to conquer the weed seedbank and not settling for good-enough control. He's found that a combination of effective herbicides with multiple modes of action and hiring chopping crews to remove weed escapees and burn them is effective.

But the war is far from over. "The fields are pretty clean now, but we're still having weed trouble on field edges and seeing occasional escapes," Morgan said.

Morgan knows herbicides alone no longer provide effective weed control. And in a year when many major herbicide active ingredients are in short supply or overly expensive, non-chemical solutions may be more important than ever.

Not long ago, Morgan was spending $100,000 or more annually on chopping crews that worked almost all summer to rid fields of Palmer amaranth because it threatened his livelihood. This year, he only spent about $10,000 to go after weeds manually because they weren't as prevalent.

"If you don't take care of pigweeds (Palmer amaranth), they will take care of you," Morgan said. "You can see where they have totally taken over farms. We fight pigweed tooth and nail to keep the numbers down so they don't explode."

More than 250 weed species have developed resistance to herbicides, according to the Weed Science Society of America. If left unchecked, weeds may slice yields by depriving row crops of water, nutrients and sunlight.

Palmer amaranth and waterhemp, both members of the pigweed family, are particularly nasty and tough to control. Each is a prolific weed seed producer known to foil up to six and seven herbicide sites of action, respectively.

Tom Barber, a University of Arkansas Extension weed scientist, said mechanical and cultural weed-control practices may not be cheap and easy, unlike when one pass of glyphosate did the trick. If farmers want to keep weeds at bay and preserve the efficacy of herbicides that still work, he said they need to consider multiple control methods.

"Farmers have to get out of the mentality that herbicides are the only answer," Barber said. "Ever since glyphosate resistance became an issue, we made a huge shift in our education programs to focus on cultural practices to reduce weed numbers. Some farmers don't want to do that because it costs more money, and it's not as easy."

Cover crops such as cereal rye and hairy vetch are Larry Steckel's top nonchemical recommendations to fight herbicide-resistant weeds. Cover crops terminated just before or after planting can reduce Palmer amaranth infestations by 50%, according to the University of Tennessee weed specialist.

University of Missouri tests show 70 to 110 pounds of cereal rye planted per acre in the fall and terminated shortly after planting soybeans in the spring can reduce waterhemp stands by 50% to 70% for 28 days after planting.

"The weeds that do come up are delayed, which gives farmers more time to get postemergent herbicide applied," Steckel said.

John Lindamood agrees with Steckel. The Tiptonville, Tennessee, farmer said cover crops in his fields either smother out weeds or delay emergence so he can apply herbicides in a timely manner.

"The goal is to keep weeds at bay until crops canopy, and then you are home free," he said.

At times, Lindamood said he's been able to reduce herbicide rates because of effective control of weeds by cover crops or eliminated a herbicide pass. With skyrocketing crop input prices and some herbicides difficult to get, cover crops can help ease both concerns even though seeding and terminating cover crops is far from free.

Lisa Behnken, a recently retired University of Minnesota (U of M) Extension crop education specialist, believes the message that weed control can't only come from a jug is getting through.

"We have to be creative to outsmart weeds," Behnken said, which could mean reverting to control measures before herbicides became the primary weapon.

She recommended mapping weed escapes to concentrate control efforts the following year. Mowing waterways and ditches is also an effective weed-management tool before harvest. Combines can grab weeds from field or waterway edges and spread weed seeds. While not desirable, Behnken said mowing down small weed-infested patches of crop may be needed to prevent weeds from going to seed.

Many farmers who were not involved with organic production sold or parked moldboard plows and row-crop cultivators decades ago. Circumstances may dictate that producers once again utilize the implements to help control weeds.

Barber said turning soil over to bury weed seeds or ripping weeds out of the ground during the growing season can be effective control measures. He's not suggesting doing this on every acre but certain areas where needed.

"I know deep tillage goes against conservation practices and thinking, but it may be needed, Barber said.

"One weakness pigweed has is seed longevity in the soil is fairly short, like three to five years," he continued. "It won't completely reduce pigweed, but it will cut them down significantly."

For farmers who no longer own a plow or cultivator, used ones are often available for sale.

The success rate of the Seed Terminator on destroying waterhemp seed, according to a University of Missouri study, is more than 90%. Similar findings were found in university tests of the Harrington Seed Destructor. However, it takes many years to reduce weed seed banks.

"If you get something that keeps about 90% of weed seeds that enter a combine from going back in the soil, it will be very useful," said Kevin Bradley, University of Missouri weed scientist.

Read about the university's work on weed seed destruction and see a video of the Seed Terminator in action at https://extension.missouri.edu/…. 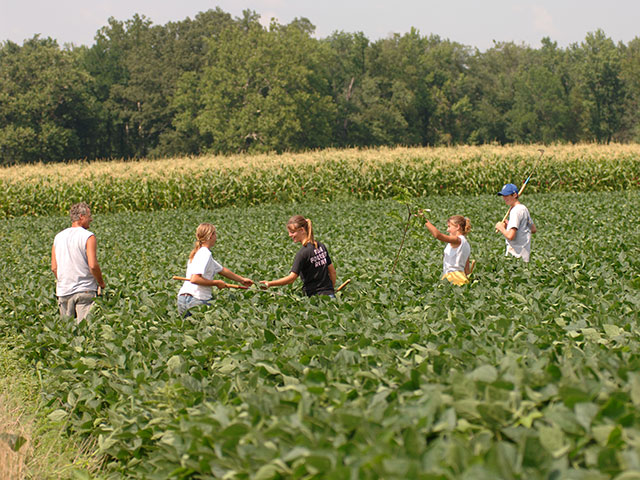