DUNDEE, Miss. (DTN) -- Farmers are a pickin' and a grinnin' this cotton harvest with the prospect of strong yields and record-high prices.

Justin Cariker was all smiles on Oct. 12 as he watched his two John Deere cotton pickers harvest what he expects to be one of his most profitable crops in years, if not ever. The owner of Maud Farms based near Dundee, Mississippi -- about 50 miles southwest of Memphis, Tennessee -- grew a little more than 3,000 acres of cotton. As his harvest neared the one-third mark, Cariker said yields were better than average at more than 1,300 pounds per acre.

"With harvest (ongoing) and prices up and yields up, this is very exciting," Cariker told DTN as he stood in front of one of his giant green pickers. "I can't say it will be my highest-yielding crop, but it will be in the top percentile."

The 2021 U.S. cotton harvest was 35% complete as of Oct. 24, according to the USDA Crop Progress report. Sixty-four percent of the crop is rated in good-to-excellent condition.

2021 will be a memorable year for most cotton producers pertaining to profit and productivity potential despite a challenging growing season for many. Commodity analysts say growing cotton in 2022 will likely be financially rewarding, as well, though rising input costs could minimize earning power.

Strong cotton demand and low inventories, along with logistics disruptions, during the past year sent cotton prices soaring. USDA projects the 2021-22 season-average farm price for upland cotton at a record 90 cents per pound. That's nearly 2% above the previous all-time high in 2011-12, according to the agency's October 2021 World Agricultural Supply and Demand Estimates report. Upland cotton comprises nearly 99% of all U.S. production, USDA acreage data showed.

Cotton farmers in northern Mississippi and southern Arkansas said yields this year are good to a little better than average at 1,200 to more than 1,300 pounds of lint per acre. At 1,200 pounds per acre and 90 cents per pound average sale price projected by USDA, that equals gross revenues of $1,080 per acre.

USDA forecasts the breakeven price for 2021 cotton production at $774.56 per acre. Cotton producers have the potential to profit more than $305 per acre, according to USDA estimates.

Most of Cariker's cotton is sold through Staplcotn, a marketing cooperative based in Greenwood, Mississippi. He hopes to sell more than 8,500 480-pound ginned bales during the 2021-22 marketing year. Staplcotn brokers market members' cotton, though members have the right to sell some on their own.

Since farmers and marketers generally sell cotton before and during the marketing year, it's unlikely a majority of cotton was sold for more than $1 per pound, merchants and farmers said. Cariker is hoping for an average sale price in the 80-cent-per-pound range for the 2021 crop.

Cotton farmer Jake Dodd has a little more than 1,000 bales to market from the 2021 crop, which he anticipates will produce about 9,000 bales. He grows 3,500 acres of cotton near Wilson, Arkansas.

"For cotton, I didn't get the high (price), but I sold for a profit the whole way," he said. "There's a couple trades I wish I had back, but that's everybody. The last little bit I have left to sell will be really good."

Crop quality also appears to be good with more than one-third of the nation's cotton picked. Tri Watkins, co-owner of Rabbit Ridge Gin Company near Dyess, Arkansas, said cotton being ginned (lint is separated from seed and trash) at his facility is mostly getting a white color grade of 41 or 31. Though it's early in the cotton processing season, Watkins said farmers he works with are getting a 2- to 4-cent price premium per pound for quality.

Mississippi and Arkansas Delta farmers said 2021 cotton production is remarkably good even though plenty of obstacles existed before and during the growing season. Both states make up about 8% of the U.S. 2021 cotton acres at 11.7 million, according to USDA data.

A wet spring delayed planting 10 days to two weeks in the Delta region, farmers said. Cariker said June rains inundated some of his fields that stunted some plant growth, but replanting wasn't an option.

"It was too late to replant, so you have to work with the stand you have," he continued. "It (June rains) will hurt us on some of our late-planted cotton. Cotton doesn't like wet feet."

Graydon Flowers, who operates Wolf Lake Farms near Clarksdale, Mississippi, with family, said they lost about 300 acres of cotton out of 4,000 total to June flooding.

Insect pressure was an issue during the growing season in many areas of the Cotton Belt. Plant bugs, particularly tarnished plant bugs, were the biggest problem, farmers and Extension officials at Alabama A&M and Auburn universities reported.

Flowers said weekly spraying for plant bugs upon their arrival occurred to prevent the pests from feeding on and damaging squares and young bolls.

"There was a lot of pressure. It was an expensive plant bug year," Flowers said.

"It was a challenging year. We weren't expecting it to be as good of crop as it turned out to be," Dodd said.

Overall, though, USDA reduced 2021 U.S. cotton production by 3% compared to last month to 18 million bales. An estimated 14.61 million bales were produced the previous marketing year. The yield per harvested acre in 2021 is projected to average 871 pounds.

It appears that cotton farmers won't have a tough time finding buyers for this year's crop, which led to the meteoric rise in prices.

Jeff Johnson, a vice president at Allenberg Cotton Company and head of U.S. domestic sales for the cotton merchandiser in Memphis, Tennessee, said cotton demand is strong despite the COVID-19 pandemic. Allenberg, a subsidiary of Louis Dreyfus Company, is reportedly the largest cotton merchant in the world, marketing well over 10 million bales annually.

"There was a drawdown of global apparel inventories during the COVID lockdown to levels that are just untenable," Johnson said. "With stimulus payments, unemployment benefits and people sitting at home and shopping online, U.S. demand for apparel didn't go down. It went up, especially for leisure wear that is cotton rich."

"Fast forward 12 months," he continued. "We're in a situation in the U.S. where wholesale inventories are small, and we need to get inventories built back up. Orders started to hit textile mills (domestically and overseas). At the same time, we're having massive bottlenecks in our logistics system. That's created a massive demand for cotton."

USDA reduced overall U.S. cotton production estimates by 500,000 bales in October. The agency lowered ending stocks by the same amount to 3.2 million bales or 18% of total use. With exports and domestic use holding steady at 15.5 million bales and 2.5 million bales for the 2021-22 marketing year, respectively, analysts expect prices to remain strong into 2022. World cotton ending stock in 2021-22 are projected to be 3.2 million bales below the previous year.

If farmers have 2021 cotton to sell, Johnson said it might be a good idea to take a profit.

"Cotton has only been over $1 (per pound), I believe, three different times in the last 40 to 50 years," he continued. "This is rare territory. But we have to be careful not to get the price of fiber so high that we start destructing demand."

DTN Lead Analyst Todd Hultman added that farmers should consider selling up to 25% of their anticipated 2022 crop in the next few months.

"I think prices will stay well supported through the winter ... people with the supplies are in charge," Hultman said. "When you get into spring, a whole new Pandora's box of risk opens again."

Matthew Wilde can be reached at: matt.wilde@dtn.com 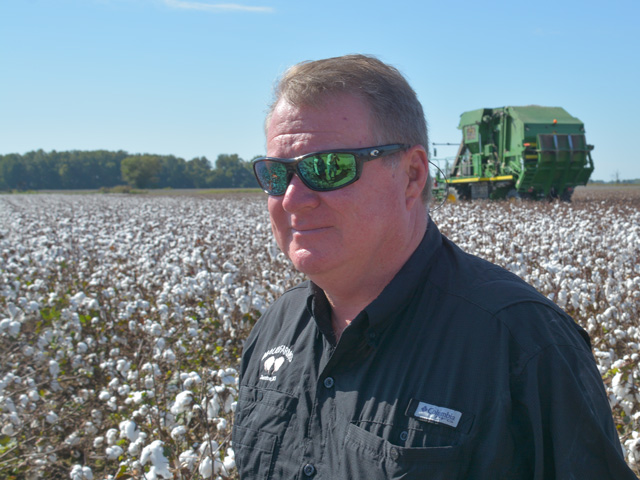