Mexican Agriculture Minister Victor Villalobos addressed the issue with reporters after a farm tour with U.S. Agriculture Secretary Tom Vilsack. Villalobos is in Iowa with Vilsack to participate in World Food Prize events in Des Moines.

Vilsack also took time to visit with striking United Auto Workers (UAW) at a Deere facility in Ankeny and called for a quick but equitable end to the strike.

Mexico has moved to ban its farmers from growing transgenic corn or use corn with biotechnology traits for human consumption. But Villalobos said Mexico still relies heavily on corn from the U.S., and its policies would not affect U.S. exports of corn.

Villalobos said Mexico is self-sufficient in growing white corn, which is directed for human consumption and used to produce roughly 1 billion tortillas every year. Villalobos said corn is also culturally important to Mexico, including for religious purposes in some cases. "So, it is complex and complicated."

Mexico, though, is the No. 2 export market for U.S. corn, topped in the 2020-21 marketing year only by China's entry into aggressively buying U.S. corn. Mexico bought nearly 579 million bushels of corn in the marketing year that ending Sept. 1, while China bought 842 million bushels. Mexico, though, is the steadiest U.S. export market for corn, buying roughly the same volume a year earlier while there were limited sales to China.

"We will continue to require and demand yellow corn from the United States," Villalobos said. "So that's the situation. We see biotechnology is not just GMO. Biotechnology is a set of techniques that are being used and are being implemented in many different areas, particularly health, human health. So that's something that is there. But, specifically, we are not going to allow the cultivation of corn in Mexican territory. That's what the course is."

While Mexican officials may limit domestic production of biotech crops, Vilsack said the important issue for the U.S. is the ability to continue having access to the Mexican market.

"That is a market that is very important to Iowa, very important to the Midwest, and important to the United States," Vilsack said. "And what the secretary (Mexican ag minister) has assured me is that market continues to be open. That's what people here have to understand is that the corn they are raising is still being imported into Mexico even though its GMO."

After leaving a farm at the edge of Ankeny, Vilsack also stopped by a picket line for United Auto Workers (UAW) employees outside the John Deere plant in Ankeny. Nationally, more than 10,000 Deere workers went on strike last week. More than 40 workers were picketing outside the facility when Vilsack and his entourage visited. The secretary pointed out the UAW backed him in 1998 when he ran for governor.

"You don't forget the people who gave you an opportunity to serve, right? You just don't. You folks are hardworking folks. You provide a tremendous product. It's one that rural America relies on, farmers, ranchers and producers are constantly talking green," Vilsack said. He said it's important for the issue to get resolved in a way that is "fair and equitable for all of you."

Vilsack said the country has not paid enough attention to people who work with their hands and build or construct in manufacturing facilities.

"We need the folks who work with their hands, who work hard every day, go home, take care of their families, commit to their community. And to understand and appreciate the value of hard work I'm surrounded by."

The secretary told reporters he wants the contract negotiations to work out fairly for the workers, but he wasn't going to comment on whether Deere's offer to workers is fair.

"John Deere's a good company," Vilsack said. "They ought to be able to make this fit and make this work out to a point that it's fair for the workers, to make sure we continue to have the equipment and the farm machinery that's important to American agriculture. I don't know the details of the offer. That's not my job. My job is to be here to basically support these folks because I think they deserve what they earn, what they want they're going to get. This is a company, obviously, that has done very well recently. They've had record profits. And, you know, it's important to note."

Vilsack said he would be happy to speak to Deere CEO John May to make sure May understands how important it is to agriculture to quickly resolve the strike, "fairly and equitably."

"Because, obviously, for American agriculture, it's important to have the equipment and the parts to do what we do better than anybody else in the world, which is grow and raise some food," Vilsack said.

Justin Limke, a striking worker and vice president of UAW Local 450, thanked the secretary for visiting with workers.

"We're out here fighting for better benefits, health care after retirement, stuff like that, so it means a lot he came out here to support us."

Limke said talks are continuing between Deere and the union, but he did not know any real details. 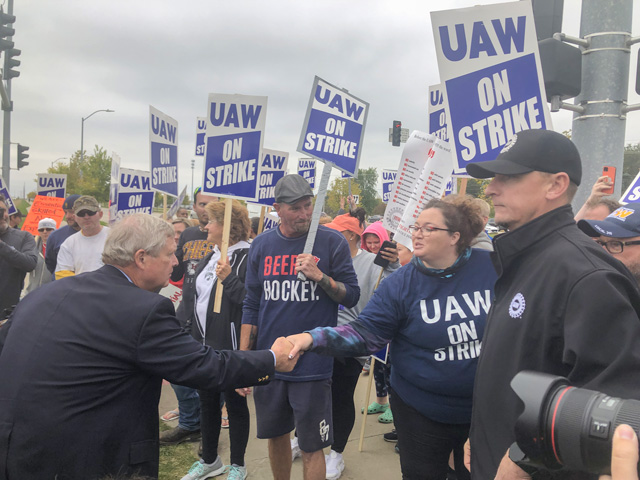