ROCKVILLE, Md. (DTN) -- Frank Appleberry has a list of things to apply each spring to his crop fields in Tillar, Arkansas: preplant fertilizer, preemergence herbicides and oh, don't forget the liquid blend of pulverized caterpillars, teeming with live viruses.

It sounds unconventional, but for a growing number of American farmers, this type of bioinsecticide is proving a regular and reliable tool to control Helicoverpa zea, the multi-crop pest known as soybean podworm, sorghum headworm, corn earworm and cotton bollworm.

These bioinsecticides are made from a strain of naturally occurring nuclear polyhedrosis viruses (NPVs), recently categorized as Group 31 insecticides. They are sprayed on row crop foliage like a normal insecticide. From there, things get a little gruesome, but only for the targeted caterpillar pests.

After ingesting the bioinsecticide, the caterpillar dies within a week, and the virus turns its corpse into a virus-replicating factory. The blackened, jelly-like remains of the worm overflow with more viruses, ready to infect more caterpillars, who in turn produce more virus. And so the cycle goes, until the caterpillar infestation abates and -- without a host -- the virus fades into the ecological background.

"It's just part of what we do now in the spring," explained Appleberry, who has replaced much of his onerous schedule of spraying soybeans at least every two weeks, with a single application of an NPV-based bioinsecticide called Heligen, around soybean bloom. "The first year we used it, we sprayed 1,150 acres and only had to come back with a pyrethroid for worms on about 200 acres," he recalled.

These types of viruses are already circulating in nature and are not totally new to agriculture. University researchers dabbled with harnessing their insecticidal properties back in the 1970s, but they were largely supplanted by the advent of fast-acting synthetic insecticides, such as pyrethroids.

Now, a global biotech company, AgBiTech, has scaled up a commercial NPV product in the U.S., Heligen. It uses an NPV strain that targets H. zea (bollworm/earworm/podworm/headworm) and is registered for use in most row crops. AgBiTech also offers a suite of products registered globally to control other caterpillar pests, such as soybean looper (Chrysogen), armyworm (Fawligen), old world bollworm (Armigen), and a dual-virus product combining the H. zea and soybean looper strains (Surtivo). Other brands of NPVs also exist, but AgBiTech has made the largest inroads among American growers, university entomologists and farmers told DTN.

Amid growing insect resistance to insecticides and Bt, as well as interest in more eco-friendly farming practices, the success of NPVs has caught the attention of an even bigger player -- Corteva Agriscience. This year, the company announced its plans to commercialize an NPV strain marketed under the brand name, Hearken, developed by a German company, Andermatt Biocontrol.

AgBiTech prides itself on running what Chief Technology Officer Paula Marcon jokingly calls "a five-star hotel for caterpillars" at the company's manufacturing facility in Fort Worth, Texas. No check-out required for these doomed guests, however, as the company infects the insects with their NPV strain of choice and then blends them into a smoothie-like liquid, ready for the sprayer.

"It's a little brownish, like syrup and smells wonderful," Marcon said. "And it's well adapted to foliar applications." Since the NPV cocktails contain living organisms, they do come with some special handling requirements. They can last many years in a freezer and several months at room temperature (under 77 degrees), but if they stay at temperatures well above 77 degrees for more than 36 hours, the products can start to break down. "That last mile to the field, you have to be careful," said Marcon.

And since the viruses are protected by a protein coating that is degraded by highly alkaline environments -- such as a caterpillar's stomach -- tank mixes need to stay below a pH of 8 to keep the virus alive, Marcon said. AgBiTech's products, such as Heligen and Surtivo, can be tank mixed with other active ingredients, such as herbicides or fungicides, as long as the tank's pH stays low enough, added Marcos Castro, AgBiTech's vice president of sales and marketing.

Heligen requires a fairly low use rate, ranging from 1 to 2.5 ounces, depending on the crop, with costs landing around $5 to $6 per acre.

It's a small dose because ultimately, the caterpillars in your field do the work for you as they arrive, Marcon noted. "Once the first caterpillars are infected, it becomes a COVID-like situation, with each caterpillar infecting many others," she said. "Ten days after a spray, you can have 100 times more viral particles in a field, which is the opposite of a chemical insecticide, which are at their highest concentration on the day that you spray, and then it goes down."

University of Arkansas Extension entomologist Gus Lorenz was skeptical when he first started testing Heligen in his plots in 2010. But after about seven days, his team started tracking dead caterpillars and by 14 days, they stopped counting, since that generation of podworm was cycling out.

He was shocked to discover the virus was still circulating when a second generation of caterpillars arrived -- 32 days later. "There were dead worms everywhere -- in every plot we had," Lorenz recalled. "The virus had moved across the entire field, through all our plots." So far, Lorenz has found NPVs working to control podworms up to 40 days after application in his trials.

In fact, the virus's easy mobility later caused Lorenz problems, when it would travel to research plots dedicated to trials for synthetic insecticides, ultimately ruining that data by knocking down pest pressures. Eventually one of his graduate students, Joseph Black, discovered that 21 different insect species were helping escort the virus across fields each season. "They come in, feed on a dead worm, alight and drag that virus along with them every time they move," Lorenz said. "That was kind of a revelation.

The idea of insects doing the work for you appealed immediately to Adam Baldwin, who was battling growing infestations of headworms in his sorghum fields in McPherson, Kansas, about six years ago.

Not only were pyrethroids not working consistently against headworms, but applying them would wipe out the beneficial insects that helped him keep sugarcane aphids at manageable levels, Baldwin recalled. A group of visiting Australian farmers suggested NPV-based insecticides and Baldwin set off on a mission to find it in the U.S.

"I was the first farmer in Kansas to use it -- you can put that on my gravestone," he joked. "I had to drive to Oklahoma to get it." Since then, he estimates up to 50% of the sorghum farmers in his region now use NPV-based bioinsecticides regularly, as crop scouts and co-op employees picked up on his success and started advocating for their use.

Using biologicals for pest control comes with a learning curve, both farmers noted. First there are the logistical hiccups, with the pH sensitivity (Appleberry tests his tank mixes to ensure they're safe) and the temperature restrictions.

"You can't throw it in the back end of a pickup and ride around for two to three days and expect it to work," explained Appleberry. "We keep it in the freezer until we need it."

A bigger mindset change is required as well, Baldwin said. Most farmers are used to the wait-and-see approach to spraying for pests, as well as fast-acting synthetics. "You scout, you let the population build, and then you spray worms when they are big and easy to see, and they're dead that day," Baldwin said.

But the bioinsecticide needs time to build up a cycle of caterpillars dying and infecting others. That means applications must go on early, for low thresholds of small worms, and can take a week to build up control, AgBiTech's Castro said.

"It's a mindset change," admitted Baldwin, who now starts scouting for tiny headworms immediately after pollination. "But Heligen is low cost and milo is highly valuable right now, so if I find worms, why risk it?"

Caterpillar pressures are heavy and regular enough in soybeans in southeast Arkansas that Appleberry has found a regular application at bloom works best for his operation, even if podworms are hard to find then. Waiting on the biological product to its job does require patience -- not always his strong point, he admits.

"One of the best ways to be patient is to think about spending $5 an acre on Heligen for a month's control, versus $15 for an insecticide application every 7 to 10 days" he said wryly.

When Lorenz looks at current insect control in the Midsouth -- rising insecticide resistance and Bt resistance, a shrinking toolbox of chemicals, and plenty of pests -- he thinks bioinsecticides are a safe bet.

"I think it's the wave of the future," he said. "It's been underutilized to this point, but it's becoming more and more obvious to me that they'll play a big role in the future."

Corteva Agriscience agrees, said Frederic Beudot, who heads up Corteva's global portfolio of biological products, a new area of growth for the company. Corteva is rolling out its Hearken bioinsecticide for use in corn, cotton and sorghum, and the company will also have its sales teams showcasing samples of it next year, Beudot said.

"As older chemistries we've relied on to delay resistance are being phased out, we have fewer and fewer tools," he said. "And newer insecticides and traits are under increasing pressure, so we have to find new sources with completely different modes of action to reduce insect populations without putting more pressure on those precious modes of actions we have left."

AgBiTech is looking to expand its footprint in the U.S., too, by growing in row-crop markets, as well as branching into specialty markets such as sweet corn, hemp, peanuts, strawberries and tomatoes, said Castro. Heligen and Fawligen are also certified organic herbicide options, and Surtivo and Chrysogen are eligible for that certification, as well, Castro said. 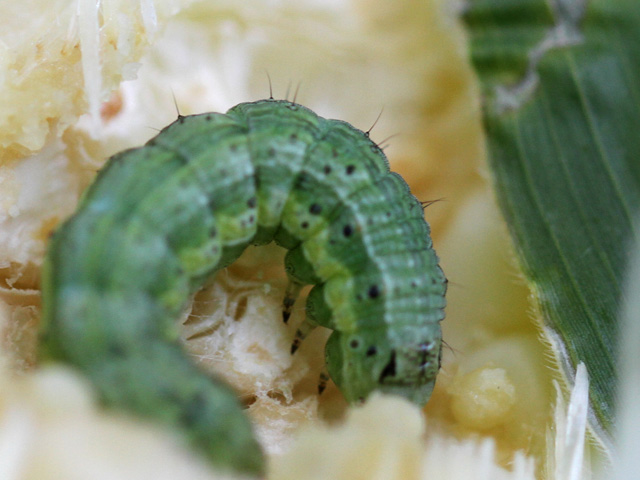