ANKENY, Iowa (DTN) -- There's nothing simple about figuring out crop fertility for 2022. Examining what worked and what didn't this year and pairing that with soil and in-season tissue testing is a good place to start.

"Start with your soil test values," Clark said. "That's what is going to help you know what to do and how to spend your money. Whatever is the lowest nutrient level, focus on getting that one built back up. Maybe that is just sufficiency levels plus crop removal to get through the high fertilizer prices."

The DTN Fertilizer Index -- a collection of about 1,700 fertilizer price bids from more than 300 retailers -- indicates retail fertilizer costs have soared during the past year. According to the most recent prices, DAP is 63% more expensive, UAN32 is 72% higher, MAP is up 74%, UAN28 is 78% higher, anhydrous ammonia is 82% more expensive and potash is 85% higher. (https://www.dtnpf.com/…)

DTN doesn't track sulfur products. Matt Hardy, agronomy division manager for North Iowa Cooperative in Thornton, Iowa, said sulfur is mostly up 30% to 40% compared to last year. Hardy said SO4, a pelletized gypsum, is an exception. It has only increased about 6% in price in the past year, but availability is scarce.

Sulfur shortages mostly occurred in fields that only relied on elemental sulfur or gypsum applications as needed. Both nutrients require adequate moisture to be converted into the soluble form of sulfate to be taken up by plants. Sulfur is necessary to help corn carry out photosynthesis and efficiently use nitrogen, among other things.

On average, he said S deficiencies reduced corn yields by 10 to 12 bushels per acre (bpa), based on company yield checks.

If S is needed in 2022, Steinkamp recommends applying multiple types based on need to reduce the chance of deficiencies in corn, especially if rainfall is scarce.

Applying elemental sulfur or gypsum and a more water-soluble form of S in-season such as ammonium sulfate or ammonium thiosulfate can mitigate risk, Steinkamp said. He recommends a 10-to-1 ratio of nitrogen to S for high-yielding corn.

Sulfur needs have steadily increased in recent years due to reduced atmospheric deposition of the nutrient, increased crop removal rates and adoption of no-till, according to Purdue University. Every 20 bushels of corn removes 1 pound of S from the soil.

For more on S, go to: www.agry.purdue.edu/ext/corn/news/timeless/sulfurdeficiency.pdf

"Our group of farmers have pretty consistently put on sulfur, whether it's in the fall, spring or in-season," Hardy said.

Drought stress exacerbated potassium (K) deficiencies in corn and soybeans, which were on the edge or below acceptable levels in many fields. Clark said the lack of K was the most talked about nutrient that limited yields in South Dakota in 2021.

For corn, Steinkamp said low K reduced yields by up to 50 to 60 bpa and caused "severe" reductions for soybeans in 2021.

"When we have a dry year, the clay particles collapse around potassium and it gets stuck," Steinkamp said. "The way to fix that is bump up the rate of application in the fall."

Clark added, "From there, all you can do is hope and pray for rain."

For high-yield corn and soybeans, K levels should be 200-plus parts per million (ppm) per acre, Steinkamp said. It takes roughly 10 pounds of K (17 pounds of potash) to increase soil test levels by 1 ppm. Potassium removal rates for 220-bpa corn and 70-bpa soybeans are 59 and 91 pounds, respectively, per acre, he added.

Phosphorus (P) levels in ppm need to be in the upper 20s to low 30s for high-yielding corn and soybeans, Steinkamp recommended. Soybeans and corn remove 0.8 pounds (lbs.) and 0.4 lbs., respectively, of P per bushel.

It takes about 20 lbs. of P to increase the soil test by 1 ppm. Steinkamp said keeping nutrient levels at optimum rates is important, but high fertilizer prices could be a barrier.

"What we need to do to truly push yield is to fill as many holes in the crop nutrition program as possible," Steinkamp said. "With nutrition, you don't always know if a particular nutrient will result in higher yields because another nutrient may be low. Building all soil nutrient levels is key.

"I would apply removal rates plus build a little," he continued. "Hopefully, fertilizer prices will start coming down to build rates back up."

Drought wasn't an issue in 2021 for much of the Eastern Corn Belt. Tim Laatsch, director of agronomy in North America for Koch Agronomic Services and a farmer near Effingham, Illinois, said his region experienced one of the wettest Julys on record that carried over into early August.

Laatsch said his decision to split-apply 200 lbs. of UAN32 for corn with a nitrification inhibitor to minimize leaching was fortunate given the wet conditions. He applied about half pre-plant as a weed-and-feed and half injected in-season at the V3 growth stage. In some fields, the nitrogen split favored in-season application.

During an interview with DTN on Sept. 5, Laatsch said harvest is 50% complete. He reported good corn yields averaging about 260 bpa.

"The risk mitigation strategy paid off for me big time," he said. "I mitigated the risk of drought affecting nutrient uptake later in the season because I got the nitrogen to the root system early. But I hedged against a wetter season with a nitrification inhibitor that reduced nitrogen losses to make sure it was available to the crop during grain fill and the reproductive stages."

Baranick said another year of ample precipitation could be in the cards for the Eastern Corn Belt. Knowing that drought could return to southern Illinois as well, Laatsch plans to employ a similar nitrogen strategy to reduce risk.

Almost the entire continental United States west of the Mississippi River -- except Louisiana -- is considered abnormally dry or suffering from varying degrees of drought, according to the U.S. Drought Monitor released on Oct. 7. (https://droughtmonitor.unl.edu/…)

Dry conditions that affected crop fertilizer utilization in 2021, both good and bad, could be in play for 2022 as well.

Baranick said current long-term weather models do not indicate drought-busting wet weather through the beginning of spring. The weather phenomena La Nina -- below-normal Pacific Ocean temperatures near the equator -- is also expected to materialize by the end of October. That typically brings erratic periods of warm and cold weather in the winter, but not necessarily more precipitation west of the Mississippi River. East of the river, though, the weather tends to be wetter than normal.

"I don't see a whole lot of change in the drought picture through the winter in the Corn Belt west of the Mississippi," Baranick said. "Last winter was a La Nina pattern."

Precipitation to lessen or break the drought will likely depend on how quickly La Nina ends in the spring, Baranick continued. If La Nina subsides in March, he said there's a good shot the dry pattern could end.

"I know a lot of people west of the Mississippi are really banking on that," Baranick said. 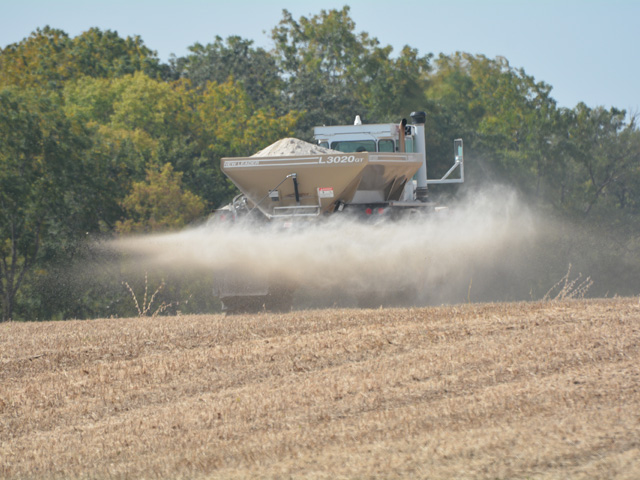