LINCOLN, Neb. (DTN) -- Whether through clean-water policies or climate impacts on availability, the role of water in global food security is complex, but full of collaborative potential, as the Water for Food Global Forum seeks to demonstrate again this year.

"Some things we found out last year is we had people participating that wouldn't normally be participating around the world," said Peters McCornick, the Daugherty Institute's executive director. "And so we wanted to build on that, but also be a bit more strategic about what we're focusing on."

Nebraska's status as an irrigation capital was one of the main reasons the institute was formed and located at the University of Nebraska. When formed, though, the institute's staff was challenged to be engaged globally on the role of water in agricultural production. During the past five years, the institute has begun to engage more with economists and analysts at the World Bank. That included inviting World Bank staff to the institute's conference, but also to tour irrigation facilities in Nebraska.

"The World Bank, they were very cynical when they first came because there's this narrative around groundwater that if you introduce agriculture to groundwater, then the groundwater disappears," McCornick said. "Nebraska is pretty unique, and they weren't convinced at first."

"Our board and leadership want us to explain where we are having an impact and they are always challenging us on that," McCornick said. "We can't just keep having conferences for the conferences' sake. We have got to be thinking about reaching people and developing new ideas and always asking, are we actually changing the direction of water and agricultural management?"

The institute has been working with small-scale farmers in Rwanda. Farmers in that country have experimented with rainwater harvesting, pedal pumps and even center pivots to increase productivity. Irrigation there focuses on a lot of high-value crops such as fruits and vegetables. Traditionally, the country has produced a lot of bananas, so water management for those banana trees is important.

"They've seen the failures; they've seen the successes. So, one of the things the team has been doing there is looking at what's worked and what hasn't worked. What are the businesses that are businesses there that are being successful? We're basically looking at more than irrigation, but water management and other inputs in the value chain and the markets associated with that."

Rwanda has some areas with center pivots built around a community of small-scale farmers who share the pivot and collaborate on its use.

"We're looking to scale it out to five other countries, but it's been slowed by the COVID crisis," McCornick said. "We've just doubled the size of our team there."

The institute helps examine how irrigation developed agriculture in Nebraska, but also looks at how water management has developed and what it will take to sustain water resources within the state. Nebraska has 23 natural resources districts that manage groundwater resources in the state. Each district has different limits on wells, metering water usage and at least some have caps on usage.

"There are still some areas like the southwest in the state where you have got water going down," McCornick said. "It's an area where there isn't much rainfall, the recharge isn't the same, but there has been a great deal of irrigation."

The boundary lines that drew Nebraska's territory encompassed the most expansive area of the Ogallala aquifer for underground water supply while also including the Sand Hills that sustain the groundwater with porous drainage that captures precipitation. Long-term, science forecasts stable irrigation conditions for Nebraska, even as climate change increases temperatures. "The predictions are more of it (water) will be captured," McCornick said. "So, we'll be using more water because temperatures will go up, but at the same time more water will be captured natural in the region."

Nebraska is the most heavily irrigated state in the country, but irrigation has increased eastward over time. McCornick noted irrigation has spread to southeastern states that may have a great deal of rainfall but still see dry periods and potential drought.

"That little bit of extra water gives the farmer a return on investment," McCornick said. "Irrigation in the U.S. has stayed static, but it's actually moved across to wetter parts of the U.S."

While Nebraska relies on irrigation for its large crop yields, McCornick noted more interest in tiling systems in the state because farmers want the advantages of draining water from fields earlier as well.

"So, what's happening there is we have over-allocated the river, and most of it goes to agriculture," he said.

As drought agreements now get implemented, Arizona is looking at 20% cuts in water supply and nearly all of that supply goes to agriculture. "So, agriculture has to absorb this cut in supply. It's becoming more difficult to irrigate because their water source is declining, their water security there is getting lower -- the insecurity is increasing."

On the state of the Colorado River, McCornick added, "Scientists argue of what will happen, but the likelihood of it continuing to decline is quite high."

Regarding technology, much like variable-rate chemical applications, there is growing experimentation with variable-rate irrigation. That, though, is still in the early stages as more research work is done on prescriptive use. Higher resolution from satellite imagery and drone are getting used more to help predict water usage and forecasting, McCornick said.

"We've been working on these things for a long time as an industry, but it's now coming to the point where this can actually be programmed into the center pivots," he said. "So, there are some real opportunities here to improve the management of center pivots."

The water center's faculty, farmers and outside researchers also are starting to collaborate more globally on water research through networking platforms such as Slack, which is an on-line tool that operates as a cross between Facebook and Microsoft Teams. Using Slack came about after farmers and researchers from Rwanda and other Sub-Saharan countries wanted to collaborate more following one of the institute's webinars. "We were asking ourselves, 'How do we help catalyze people to organize themselves?' So, this is one of our ways we use it here within the institute," McCornick said.

The Water for Food conference began on Sunday, Oct. 3, but continues Oct. 7, looking at water and the United Nations Food System Summit. The conference is free to register. The full schedule and registration information can be found at: 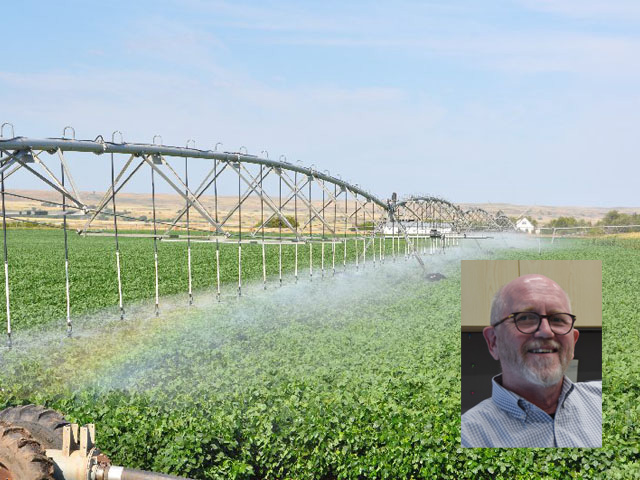