A nasty weather pattern that began Aug. 24 didn't spawn a derecho -- a storm resembling an inland hurricane with sustained winds over 100 miles per hour. On Aug. 10, 2020, a derecho had leveled millions of acres of corn and pulverized grain bins and other structures in Iowa and other Midwest states.

But multiple storms that rumbled across parts of the upper Midwest -- primarily in northeast Iowa -- this year left behind large swaths of lodged and down corn, tangled soybeans, damaged buildings and flooded fields near rivers and streams.

The extreme weather events also dashed hopes of a bountiful, normal harvest for many farmers.

"It is terrible," said Ron Strottman, describing his and neighboring cornfields that are nearly lying flat due to recent storms. The Readlyn, Iowa, grain and dairy farmer was on the verge of chopping silage before the storms hit.

Strottman said area crops were looking good, despite some bouts with moisture stress through the season. He expected corn to feed well into harvesters and produce "really good yields," for both silage and cash corn. Strottman hoped to see the combine yield monitor average well over 200 bushels per acre. If the monitor even registers 200 now, he said, that may be lucky.

The producer provided the crop update to DTN on Aug. 30 while on the way to relieve his son who was operating the silage chopper. He's not sure if all the corn can be picked up by the chopper now or the combine in a few weeks.

"I know harvest now will be a complete nightmare," Strottman said. "I think we will be able to get through it (corn) all with the chopper and combine. Hopefully, we can still save quite a bit."

ANATOMY OF THE STORMS

Severe weather occurred in clusters around the Corn Belt during the past week, according to DTN Ag Meteorologist John Baranick.

The weather pattern has been very active as system after system moved across the region, seemingly unobstructed in the atmosphere. Each storm system had a different character, placing severe storms in different spots, he said.

Several storm clusters moved through northeast Iowa and northern Illinois on Aug. 24. These storms came in waves with wind speeds of 50 to 60 mph. There was one report of 70 mph. On Aug. 26, there were more clusters of thunderstorms across eastern South Dakota and into western Minnesota. These storms occurred in the morning and afternoon, putting down wind gusts of 60-75 mph in some locations. On Aug. 27, the reports were more sporadic, but there were reports of six tornadoes in north-central Iowa around Mason City. On Aug. 28, there were more widespread thunderstorms, this time with several lines producing wind gusts of 60-70 mph in eastern South Dakota, southwest Minnesota, and including the Sioux Falls area, where baseball-sized hail was found along with the wind reports.

"The active pattern brought about good rainfall centered around Minnesota where widespread amounts over 2 inches were noted for many areas," Baranick said. "It did produce some flooding right along the Iowa-Minnesota border, but helped to reduce the ongoing severe drought in the region."

The storms dumped more than 12 inches of rain in some locations in northeast Iowa last week, according to the National Weather Service in La Crosse, Wisconsin. In Ionia, Iowa, the small town has received 20.65 inches of rain in August, the agency reported.

"The storms hit northeast Iowa farms pretty good, honestly," Basol said. "It's amazing the scope of the crop damage. You are talking a lot of acres.

"They are not all flat like a steamroller got them, thank goodness, but crops were affected that will slow down the pace of harvest and could create crop quality concerns," he continued.

Basol said the concern in lodged corn is mold growing on corn ears in high humidity and moisture situations since airflow is impeded for sufficient drying.

In Iowa alone, farmers planted 23 million acres of corn and soybeans, according to USDA statistics. In the northeast quarter of the state, where storm damage occurred, the region has about 5 million corn and soybean acres.

RACE TO THE FINISH

Most storm-damaged corn and soybeans will likely reach maturity, Licht said, depending on the severity of injury.

Soybeans in the region are just starting to turn color. Despite some lodging and tangling due to high winds, Licht doesn't expect yields to suffer much at all. "My guess is that damage was not too severe at this stage, but another week or two (later), it would be more problematic. Farmers may have to harvest at an angle or one direction to minimize harvest losses," he said.

Flooded soybeans, however, would be considered adulterated grain and not be eligible for sale or be commingled with non-flooded soybeans.

Almost all the corn affected by recent storms was in the dent stage, according to USDA Crop Progress reports. Corn kernels are mostly at the one-quarter to one-third milk line, Licht said. This is the optimum stage for silage harvest, but the crop is mostly two weeks from black layer or full maturity.

The corn crop is more mature than when last year's derecho hit. Corn was mostly in the dough stage at that time.

"From a yield potential perspective, it's a better situation than last year's derecho," Licht said.

If corn is lodged and the root system intact, Basol said plants will continue to pull water and nutrients from the soil to finish filling ears. But if plants are severely kinked or broken below the ear, they will die and ear development stops.

Sumner, Iowa, farmer Dean Buhr said all his corn is lodged, but not many plants are broken off. He believes that is likely indicative of the region, and most ears will reach black layer.

Though some fields are pretty flat, Buhr said most of the corn is still 1 to 2 feet off the ground. He expects to harvest all his acres, but it will be a slow, tedious process. And a once-promising corn harvest averaging well over 200 bpa likely isn't in the cards.

"We will learn more once we get into it," said Buhr. "The crop looked really good before the storms, and I think it still can be good. It's just going to be more work to get it."

ISU has dozens of crop and storm damage resources at https://crops.extension.iastate.edu/…. 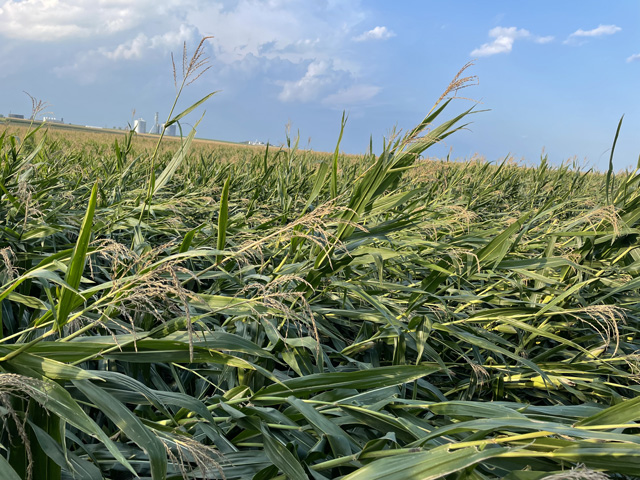