ROCKVILLE, Md. (DTN) -- Soybeans are running out of steam in some fields in the northern and western Soybean Belt as September nears.

With only about 1 to 2 inches of rain since June 1 in the central Kansas counties of Ellsworth and Russell, soybean plants are preparing to wrap up the season, carrying only the pods they can fill, said Craig Dinkel, a crop production and horticulture Extension agent at Kansas State University. Scouting trips there have uncovered aborted pods scattered between rows, and some pods may not fill fully, Dinkel said.

It's not an uncommon story across droughty parts of the country this spring, particularly the Dakotas and Minnesota, noted Seth Naeve, University of Minnesota Extension soybean agronomist. But growers who see dropped pods shouldn't throw in the towel on the crop just yet. If moisture arrives before leaf drop, soybeans can compensate for fewer pods or seeds deep into the season, by pouring their resources into the remaining seeds.

"Soybeans are so flexible in their yield response," Naeve said. "That's part of why we always say that August and September make soybean yield -- because seed size is so critical."

For some soybean growers, that late-season rain is no longer a distant dream. From Aug. 19 to 20, 1 to 3 inches of widespread rainfall visited North Dakota, Minnesota and Iowa, with northern South Dakota, northeast Nebraska and eastern Kansas catching some moisture, too, said DTN Ag Meteorologist John Baranick. Some areas even saw 3 to 5 inches, and this rainy pattern isn't going away anytime soon.

Whether or not those rains can save droughty soybeans will be a field-by-field evaluation, said Naeve.

Soybeans drop pods or abandon seeds within pods as an evolutionary mechanism to only put on as many seeds as they can actually fill, he explained.

Pod abortion is most common in the R3 to R5 stages, before seeds start to develop and fill. The plant normally sheds small, underdeveloped pods, but it can also abandon larger, fully developed ones, too. This phenomenon can be especially visible later in the season, as the plant will first abandon the last pods it has set at the very top of the plant, Naeve said.

"In northern environments, if you have a good environment, soybeans put on big cluster of pods right at the top, but those are very sensitive to stresses," he explained.

Once the plant has determined its final number of pods, around R6, it pivots and focuses its energy and nutrient mobilization toward filling them. At this point, severe drought stress will manifest as seed abortion, Naeve said. The result is misshapen pods that tell the tale of a soybean plant making some hard choices.

"Often you'll see either a barbell shape with the middle seed gone or a pod with a big bump in the middle, as it aborted seeds on each end," Naeve said. In severe droughty situations, some pods may be entirely flat and seedless.

"If farmers want to know what happened, they can actually go out and look through the canopy up until harvest, and see exactly when seed started being aborted," Naeve said. "They can do a little bit of a post-mortem."

But hope remains as long as some of the plant's leaves are intact and green.

"If things turn around and rains come, temperatures moderate and the plant re-greens, those plants will really start cooking away and those seeds will really grow," Naeve said.

The soybean plant's ability to recover yield late into the season remains intact for an astonishingly long time, he added.

"Even those individual green pods can photosynthesize a little bit," Naeve said. "The pod can contribute a little bit to its own yield."

This situation -- a drought-stressed plant setting fewer pods and seeds and then getting late-season moisture -- often results in unusually large soybean seeds. Given that some soybean plants will never get that moisture and will instead produce very small seed, the industry will likely see very variable seed size next year, Naeve predicted.

There is an end to the soybean's resurrection hopes, however.

Plants that have advanced to "leaf senescence" or leaf dropping, particularly those plants driven to premature dry-down by drought, are too far gone. "Those really drought-stressed areas won't be able to take advantage of late-season rain we have coming this week," Naeve predicted.

And if the rainy trend continues too long, it can be more problematic than helpful. "If it's dry all year long and then the plant tries to green up too late in the season, you can get green stem occurring and they become very tough to harvest," Naeve said.

There is the potential of rainy patterns pushing deeper into September in the northern and Western Corn Belt, Baranick noted.

"Daily rain is expected across the region through at least Aug. 29 and another system or two is expected during that week as well," he said. "We'll have to see how those two additional systems work out, and it's hard to give them too much weight since they are so far out. Of course, this all comes with rounds of thunderstorms which have a tendency to both miss areas and leave holes, and produce more rainfall than models suggest." 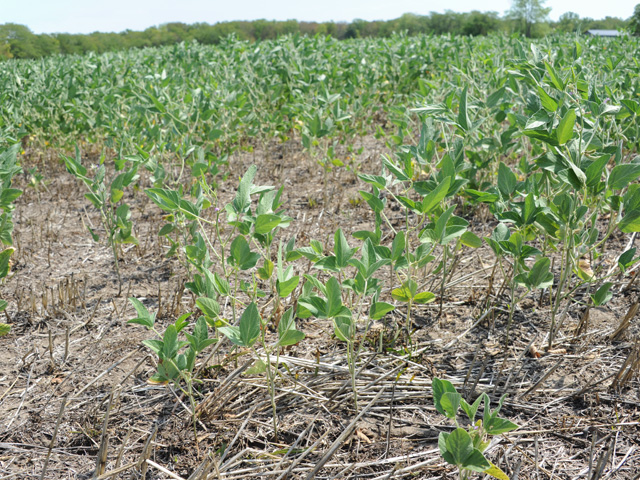