ROCKVILLE, Md. (DTN) -- August is edging toward September, but some corn diseases just won't let up.

Tar spot on corn and Southern corn rust remain stubbornly on the move in cornfields in the Midwest. Both diseases are worth scouting for, since they move fast and can require management decisions this fall or in the future, Darcy Telenko, Purdue University plant pathologist, told DTN.

The Eastern Corn Belt saw good conditions for tar spot, which can move fast when plenty of moisture and summer heat is around. The disease has been reported throughout northern Indiana, southern Michigan, southern Wisconsin, parts of central Illinois and across eastern Iowa. See the map tracking its spread here: https://corn.ipmpipe.org/….

Tar spot, which was first confirmed in the U.S. in Indiana and Illinois in 2015, is becoming an annual problem and can cause major yield loss in severe infestations, Telenko noted. For example, infested fields in Indiana lost anywhere from 20 to 60 bushels per acre (bpa) from the disease in 2018, she recalled. "This year, we're seeing similar conditions in the northern part of the state, so we might mimic some of that this season," she said.

The tiny raised black spots of tar spot can be found scattered on both sides of leaves, even moving onto husks and leaf sheaths in severe cases. Sometimes, a small halo-like feature appears around the spots, known as a fish-eye lesion. Unlike other spot-producing diseases such as the rusts, tar spot lesions cannot be scraped off the leaf tissue easily with a fingernail. See more on its characteristics from the Crop Protection Network here: https://cropprotectionnetwork.org/….

Most of the corn hybrids on the market right now are susceptible to the disease, which makes controlling infestations year-to-year difficult, Telenko noted. "We haven't been breeding for tar spot resistance because it wasn't on the radar until three to four years ago," she said. "There are a couple hybrids on the market that do show some moderate resistance, but you have to talk to your seed dealer and see if they have any good evaluations on their hybrids to get that data."

The good news is industry and academics are working to find native resistance, with Michigan State scientists identifying a handful of helpful genes already, Telenko said. "We're working on it, but it takes time," she said.

The time for cost efficient fungicide applications on tar spot infections is mostly past in Indiana, Telenko noted. "If you're not to the dough stage yet, and have a field with history of the disease, and you can find it in the lower canopy, it might be beneficial," she said. "Otherwise, if you're past the R4, R5 stages, save on the fungicide."

But it's still worth scouting to know if the disease is in your field, she added. Tar spot can increase the risk of lodging, for example. "Some of our trials in 2019, we did see reduced stalk integrity," Telenko warned.

It also moves much faster than diseases such as gray leaf spot and northern corn leaf blight, she warned. "It's good to know if it's in your field, because if you have favorable environmental conditions, it can really take off."

This tropical corn disease did some major vacationing up north this year. By Aug. 20, the Corn ipmPIPE map shows it scattered widely through Nebraska, Iowa, Illinois and Indiana, with some sightings up in central Michigan.

The disease was prominent early in the summer in southern states such as Louisiana, Alabama, Arkansas and Mississippi. That helped produce the heavy spore load needed for it to spread far and wide into the Midwest in July and August. See where southern corn rust has been detected on this map: https://corn.ipmpipe.org/….

While southern corn farmers are accustomed to calculating their risk and applying fungicides for southern rust, it's a less common decision for Midwest farmers.

Keep in mind that as corn plants near the dent stage, the benefits of a fungicide application rapidly diminish, added Mississippi University plant pathologist Tom Allen, in a university article. "As corn maturity advances past the dent stage (R5), the amount of grain yield loss resulting from premature leaf death or senescence which may be caused by heavy Southern rust infection quickly diminishes." See more here: https://www.mississippi-crops.com/…. 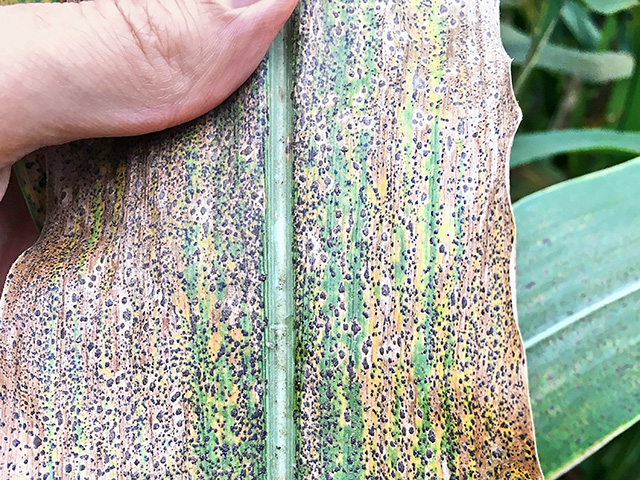