ROCKVILLE, Md. (DTN) -- Cupped soybean fields are surfacing across the South and Midwest again this summer, and with them, a new crop of rumored causes.

Once again, however, the simplest explanation for those puckered up soybeans remains off-target dicamba applications, agronomists and weed scientists told DTN. Tens of millions of acres of dicamba-tolerant soybeans are currently growing alongside non-dicamba-tolerant beans, and dicamba use in corn is on the rise in the fight against herbicide-tolerant weeds.

"I've heard about every possible alternative answer for cupped soybeans besides dicamba," said Iowa State University field agronomist Meaghan Anderson, with a touch of weariness. Theories thrown around Twitter and across fence lines this year point the finger at older products, such as AMS and Liberty, as well as newer alleged culprits, such as a genetic response of Enlist soybeans to stress or Enlist (2,4-D) herbicides.

"But a true cupping symptomology in soybeans is characteristic of a plant growth regulator and nothing else," Anderson said. While dicamba is the biggest culprit this year, other PGR products such as clopyralid are possibilities. Here, Ikley and Anderson explain how to distinguish between them, as well as dispel some common myths circulating this summer.

TRUE SOURCES OF CUPPING IN SOYBEANS

As a plant growth regulator, dicamba will cause symptomology on the newest trifoliates of a soybean plant, said Joe Ikley, North Dakota State University weed scientist. "The cupping will show up on the newest growth, and usually have a white or cream-colored tip on the soybean leaf, and toward the end of the soybean, those veins will turn parallel -- that's easiest to see on the underside of the leaf," he explained.

More rarely, carryover injury from another Group 4 herbicide, clopyralid (Stinger), can cause similar cupping and puckering, he added. Clopyralid symptoms will be heaviest in areas with coarse soil, low organic matter, or where there are piles of residue in the field, Ikley explained. Those patches of crop residue can tie up the herbicide and then slowly release it into the soil as the material degrades.

"But it's mainly going to be sporadic in the field, not field edge to field edge," he said of clopyralid symptomology.

AMS, LIBERTY AND OTHER HERBICIDES

Once again, Ikley wants growers to know AMS added to tank mixes will not cause cupping. "At higher rates, you can sometimes see leaf burns, but never a cupping response from AMS," he said. See more from the University of Illinois here: https://farmdoc.illinois.edu/….

Nor will Liberty applications on glufosinate-tolerant soybeans cause cupping. Instead, the herbicide, which primarily works as a contact herbicide, will produce yellow to light green burns -- known as chlorosis -- where it touches the plant, Ikley said. That kind of contact burn can sometimes cause a distortion in the newest developing leaves they touch, "but those types of malformations are very different from a true cupped leaf," Anderson added.

Soybean injury from Group 15 herbicides, such as Dual or Warrant, may be more easily mistaken for cupping, Anderson and Ikley said. This type of herbicide can cause a "drawstring effect," where the tip of a leaf is drawn inward, distorting and crinkling the leaf, sometimes creating a heart shape.

"We are adding more Group 15 herbicides to fight waterhemp," Ikley said. "To a person just driving by a field, it can look like cupping from your windshield, but if you get out and look at the symptomology, it's clearly not dicamba."

Sometimes, Group 14 (PPO-inhibitor) herbicides may create puckered new growth on injured soybean plants, as well, Ikley said. "But it's not [always] going to be all three trifoliates on the leaf, and the leaf veins at the end of the leaf won't be parallel," he said.

MYTHS ABOUT THE ENLIST SYSTEM

Given that 2,4-D is a fellow plant growth regulator, it isn't unreasonable to wonder if it can cause cupping in soybeans, Ikley noted. But 2,4-D injury to susceptible soybeans will look different, with leaf strapping instead of cupping. See details here: https://ag.purdue.edu/….

Moreover, there is no evidence the application of 2,4-D herbicides could cause puckering and cupping in 2,4-D-tolerant soybeans in the Enlist system, Ikley added. "In all our research, we have not been able to elicit any cupping response from Enlist," he said of the Enlist herbicides.

There is a known phenomenon where, under heat or drought stress, Enlist soybeans may temporarily look droopy following an Enlist application, Ikley added. But the plants recover quickly, within a day, and that type of plant stress does not cause any cupping symptoms, Ikley said.

In response to these rumors, Corteva released a statement to DTN and other media outlets, refuting that cupping symptomology occurs in Enlist soybeans outside of dicamba exposure:

"Based on years of thorough study and corroborated by multiple university weed scientists, Corteva Agriscience is not aware of any data in existence supporting speculation that Enlist herbicides, glufosinate, AMS, environmental stress or Enlist E3 trait expression cause cupping symptomology in soybeans," the statement read. "Dicamba off-target movement has been well-documented by universities and state pesticide regulatory agencies, and exposure to even very low levels can cause cupping of soybeans -- symptomology distinct from other types of herbicide exposure."

BUT WHERE DID IT COME FROM?

When dicamba symptomology shows a classic drift pattern, with the greatest injury starting near a dicamba-sprayed field and then dissipating deeper into the field, that's an easy diagnosis, Ikley noted. But many affected soybean fields in his region show uniform cupping symptomology, from fence row to fence row, a sign of exposure from low levels of particle drift or volatilized dicamba moving off target in large air masses, he said.

Part of the confusion among growers stems from a continued lack of understanding of dicamba's ability to volatilize and move great distances this way, even with newly formulated dicamba herbicides, both Ikley and Anderson said.

"There is a lot of skepticism and people just not wanting to believe that dicamba moves as far as it does, or that such low levels can affect soybeans, while maybe not bothering other plant species," Anderson said. As a result, many growers are reluctant to accept dicamba as a culprit when there are no Xtend or Xtendflex fields immediately adjacent, she said.

In addition to documenting dicamba herbicides' ability to volatilize and move far from sprayed fields, researchers from the University of Missouri have documented dicamba moving off target in the form of contaminated rainwater. (See more here: https://www.dtnpf.com/…).

Dicamba injury can also take up to two weeks to become visible, depending on the plant's growth rate, so by the time you see the injury, the dicamba source is long gone, Ikley said. Environmental conditions will influence how quickly soybeans recover from injury as well. "When it's drier, dicamba symptomology will persist longer and have a much higher risk of yield loss at lower levels of exposure," he warned.

Dicamba-tolerant soybeans are not the only source of dicamba in the Midwest, Anderson added. Dicamba applications are also increasing in rate and frequency in cornfields, as growers battle herbicide-resistant weeds there. Road ditches and pastures are also sometimes sprayed with dicamba-containing products.

Overall, there is simply more dicamba out on the landscape than ever before, Anderson said. The U.S. Geological Survey documented a 200% increase in dicamba use starting in 2017, when dicamba herbicides were first commercialized for use in Xtend systems.

"People are using it a lot, applications are happening later in the summer than they used to, and at higher rates," Anderson said.

See more on this topic from University of Illinois weed scientist Aaron Hager, in 2017, here: https://farmdoc.illinois.edu/….

Emily Unglesbee can be reached at Emily.unglebee@dtn.com 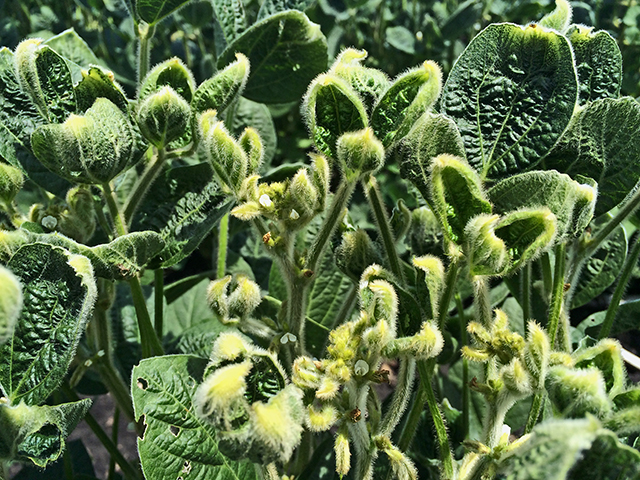