ANKENY, Iowa (DTN) -- Chuck White will spend plenty of time scouting his corn and soybean fields in the coming days with an iPad in hand to flag areas with nutrient concerns.

The Spencer, Iowa, farmer said a combination of crop scouting using field mapping technology and late-spring nitrate testing helps him determine what nutrients and how much to apply in the coming weeks on corn and soybeans.

"You can really add value by spending a little time in fields," White said.

It's time for White and other farmers to scout fields for visual signs of nutrient deficiencies so corrective action can be taken during or after the growing season, according to Dan Kaiser, University of Minnesota Extension nutrient management specialist.

Soybeans are starting to flower or will soon, and corn is nearing its reproductive stage. That means rapid fertilizer uptake has or will occur shortly for the crops, Kaiser said.

Recent heavy rains in some areas could lead to nitrogen leaching, requiring a rescue application or more in-season nitrogen than planned. In areas that are still short on moisture, that can hamper nutrient uptake as well.

Scouting fields is a critical step, along with soil and tissue testing, to determine if more nutrients are needed to maximize yield potential this year. If deficiencies are noticed that can't be fixed for the current crop, fertilizer can be applied after harvest or next spring to aid future crops.

"Farmers will start seeing if there are (nutrient) issues now," Kaiser told DTN. "Growers are at the point they need to be making application decisions. It's good to know what you are looking at to distinguish between different nutrient deficiencies that may be out there."

"I suspect where dry conditions are present, sulfur and potassium will likely be the top two nutrients plants may be short," Kaiser said.

Be on the lookout for these symptoms of nutrient deficiencies in corn:

-- Potassium deficiency could occur in dry soil conditions. Look for yellowing along the edge of lower leaves while the middle of the leaf remains green.

-- Sulfur deficiency is something to look for in low-organic-matter areas or in continuous corn. Striping occurs on the upper leaves but isn't always apparent. It can also appear as a general yellowing on the upper leaves. Read a recent DTN story on sulfur and other nutrient deficiencies here: https://www.dtnpf.com/….

-- Zinc deficiency symptoms can be found on upper leaves and will present itself as white bands extending along the leaves.

-- Phosphorus deficiency is most easily seen early in the growing season on young plants as a general purpling on the lower leaves on corn. Later, plants may not show the characteristic color, but will be stunted and may exhibit deficiency symptoms of other nutrients, such as nitrogen, due to poorly developed roots.

Watch for these nutrient deficiency symptoms in soybeans:

-- Potassium deficiency should show up on lower leaves but sometimes shows up on the upper leaves when plants are stressed. It appears as a yellowing between leaf veins on the soybean leaflets.

-- Boron deficiency is very rare, while boron toxicity symptoms can show up in plants as a general yellowing of the leaf with necrosis along the leaf edges.

If deficiencies are diagnosed, Kaiser said, soil and tissue testing can help pinpoint how much nutrients to apply. He also said that in dry years, it's not uncommon for moisture-stressed plants to exhibit symptoms that may mimic common nutrient deficiencies.

"It's probably a good year to do some testing," Kaiser said.

"In terms of what we're getting for rainfall, (farmers) will want to pull the trigger sooner rather than later to (aid uptake)," Kaiser said. "If you wait too long, it (nitrogen and sulfur) could sit on the soil surface and the plant won't effectively use it and it's a wasted application."

White said a custom applicator will apply UAN32 on corn at 60 to 70 pounds per acre starting this week.

"The corn is ready to take off now, but we need rain for the UAN to get in the soil," he said. "It will be right there at the base of the plant, and any moisture will help it get to the roots for uptake. It's a great system."

If corn is short on potassium, phosphorus and other micronutrients, Kaiser said rescue applications at this point of the growing season probably won't help. Due to dry conditions in many areas, he said, potassium may be stratified near the soil surface. Potassium uptake may get a boost in states that have experienced recent rains.

"There's not a lot a farmer can do with some of these deficiencies to bring a crop back, except for sulfur and nitrogen. But you can see where areas of fields are marginal that need a correction for the upcoming year," Kaiser said.

For soybeans, foliar feeding micronutrients such as boron, iron and zinc is unlikely to help plants, Kaiser said. If soybeans are short of potassium in dry areas, rain will likely jumpstart uptake, he said.

In areas known for iron deficiency chlorosis, Kaiser recommends planting a soybean variety that has good defensive traits against it.

"The whole thing still revolves around how much rain you get," White said. "You may put on products that don't do any good because you don't have the water." 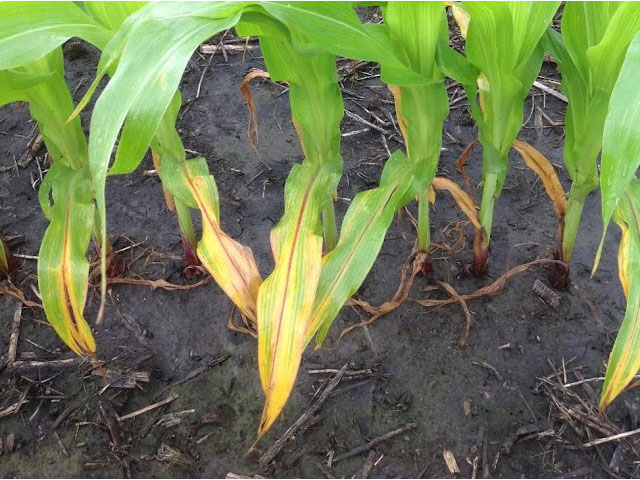