On second thought, it would be better if you don't physically encounter this weed.

The troublesome plant produces a compound in its leaves, stems and flowers that can cause intense, localized burning, rash and severe blistering when it comes into contact with skin.

Never heard of it? There's a good chance it is flowering near you right now in fencerows, field edges or along roadsides. The biennial plant likes wide-open areas that are left to naturalize. This time of year, it has reached its full 4- to 5-foot height, and the yellow umbrella-shaped blossoms are easy to see, looking very much like a sunny version of its cousin, Queen Anne's Lace (wild carrot).

Make no mistake, wild parsnip may look innocent enough for a wildflower arrangement, but the plant should be treated with respect, warned University of Wisconsin weed specialist Mark Renz. "The unique thing about this invasive weed is it takes both sap from the plant and sunlight to cause a reaction," Renz said. "The problem is those two things are often involved when people try to remove it from the landscape."

The burns, known as phytophotodermatitis, are caused by a chemical called furanocoumarin contained in the sap. There are plenty of common garden plants, such as dill, parsley, fennel, celery and others that have phytotoxic properties, but wild parsnip's chemical defense mechanism kicks in at a much more intense level.

"This is actually a chemical burn brought on by the skin's sensitivity to sunlight, and it does not take very much sunlight to activate," Renz said.

Iowa State University weed scientist Bob Hartzler said gently brushing against wild parsnip generally does not result in a reaction. Size of the plant doesn't seem to matter either, he told DTN via email. Again, it is the liquid within the plant, or sap, that causes the burns or blistering.

Wild parsnip has been found in the Canadian provinces and every state in the U.S., except Hawaii, Mississippi, Alabama, Georgia, and Florida. "Unfortunately, it is getting easier to find each year," Renz said.

The tendency to leave roadsides natural to protect milkweed and other beneficial native species may partially explain why it is becoming more prolific. The weed also just isn't all that well known, and the flowers distribute volumes of seed, which keep more plants coming.

Wild parsnip typically acts as a biennial, forming a rosette of basal leaves the first year, overwintering, and then flowering the second year. Occasionally, it may behave like a perennial, remaining in the basal rosette stage for more than one year.

Early leaves resemble celery leaves. Leaves are branched with serrated or saw-toothed edges and are divided into smaller leaflets arranged on a central stalk. The flowers are yellow and arranged in an umbel, consisting of a number of short flower stalks that arch over a common point, somewhat like umbrella ribs. The plant stem is hollow and grooved.

"The good news is wild parsnip is easy to identify if you are watching for it," Renz said. "It does look a bit like Golden Alexander, a native (and beneficial) wildflower. However, wild parsnip blooms later (June through early July in the Midwest) after Golden Alexander is long gone."

GET IT UNDER CONTROL

Digging is one control option, especially if dealing with a small number of plants. "You want to cut below the soil surface a couple of inches to severe the root crown -- like you would a thistle," he said. "The challenge is you have to do it without touching the plant sap."

Mowing is another option, especially if it is a larger patch. "In Wisconsin, we've had some success if we mow it when the primary flower, the one at the very top of the plant, and the secondary flowers, those that appear on an angle along the stem, are in bloom. The trick is to mow in that narrow window before seed drop," he said.

"The plant won't die after mowing and may regrow when cut at this flowering stage. It may even flower again," he noted. "Chances are that second group of flowers will not produce viable seeds, but you still may need to mow more than once a season to get good mechanical control," he said. Other parts of the country may have different growth patterns.

Mowing from within a tractor cab isn't a bad idea, but keep in mind that sap can stick to equipment. In fact, Renz said it is not unusual to hear of wild parsnip burns from those who do tractor repairs inadvertently encountering sap while working with or cleaning equipment.

Herbicides such as glyphosate and 2,4-D have been shown to be fairly effective in controlling this weed. But chemical tactics won't kill larger plants or the seeds.

Renz said chemical controls need to be done in early spring when basal rosettes are small. Fall applications are another option. It's best to spray when desirable vegetation is dormant when using non-selective herbicides.

Renz said wild parsnip isn't common in pasture settings -- perhaps because anecdotal reports are that cattle actually find it tasty. "I've heard that dark complexion cattle usually tolerate it fine, but those with white coats or faces sometimes experience injury to the face," he said.

Undocumented reports have also led Renz to think that once the stems are cut and the sap has dried that the danger has passed. "I'm just basing that on the fact that we don't get calls or complaints during these times. But I would still be careful around it," Renz said. 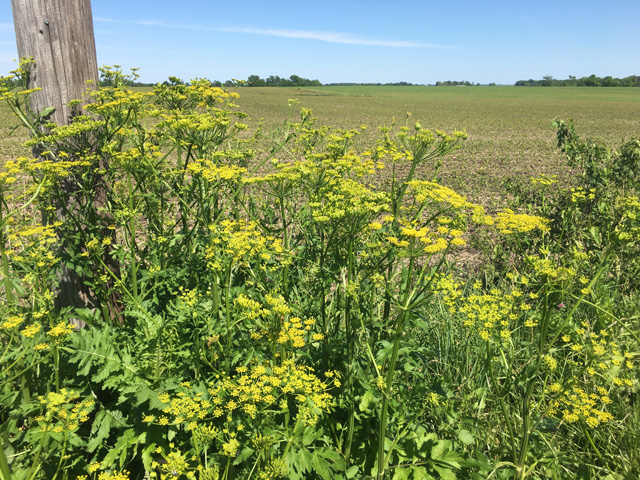