These VRA products are a very recent addition to the market and farmers, applicators and weed scientists are sometimes running into a learning curve this spring as dicamba applications get underway.

One product in particular, Sentris, has produced scattered reports of excessive foaming and pressure when mixed with glyphosate. Following the correct mixing order and protocol will be more important than ever as applicators add these new products to their spray solutions, sources told DTN.

Here's what you need to know.

WHAT ARE MY VRA OPTIONS?

The labels of the three dicamba herbicides direct users to websites filled with more than two dozen VRA products, but most boil down to two commercially available formulations.

One is VaporGrip Xtra Agent by Bayer, which is also marketed under a variety of different names by other manufacturers and distributors. This is the same active ingredient -- potassium acetate -- as Bayer's original VaporGrip technology in XtendiMax and Tavium but delivered at a higher rate.

The second is Sentris, from BASF, which contains potassium carbonate. Both products are designed to stabilize or increase the pH of a dicamba tank mix. That's key to reducing volatility, as past research has shown dicamba volatility increases significantly when a tank mix's pH drops below 5, weed scientists told DTN.

HOW DO THE VRAs BEHAVE IN THE TANK?

There have been some reports of excessive foaming and gas pressure when Sentris is added to dicamba tank mixes that include glyphosate this spring.

In some cases, University of Arkansas scientists have received reports the pressure and foaming has been significant enough to spill product out and over the edge of an inductor tank, said Tommy Butts, an Extension weed scientist with the university.

Butts and his team conducted some experiments with 3-liter capped bottles, using two different glyphosate salts (Cornerstone Plus, an IPA salt and Roundup PowerMax, a K-salt), Engenia and Sentris. "It boiled down to anytime Sentris and glyphosate were in the same bottle together, it caused this gas to be released, and excessive foaming occurred," Butts explained. The scientists didn't see the reaction when only Sentris and dicamba were mixed, he added.

That gas is carbon dioxide and its production is a sign that Sentris is doing its job, BASF representatives told DTN in an emailed statement.

"In the process of neutralizing the acidity [of the spray solution], Sentris Buffering Technology will release CO2, similar to what happens when baking soda is mixed with vinegar," the statement explained. "The CO2 does dissipate quickly."

BASF, as well as scientists from the University of Tennessee, are recommending applicators take special care to follow the labeled mixing order for Sentris to minimize foaming and gas production. That means filling your tank with half the needed water volume and then adding Sentris.

"If using an inductor tank, add the Sentris, flush it with water and get it circulating first, before adding herbicides," recommended University of Tennessee weed scientists Larry Steckel. "Do NOT mix Roundup and Sentris in the inductor tank." He recommends making glyphosate the last herbicide you add. Some dicamba tank mix partners will also require use of a drift reduction agent (DRA), and Steckel recommends adding those to the tank last.

Remember to flush with water after adding each additional product, BASF's statement stressed: "It is important to follow best practices including adding one product at a time and flushing the inductor with water between each additional product." Since modern commercial sprayers are vented, carbon dioxide pressure build-up shouldn't occur much beyond the inductor tank, BASF and all the weed scientists noted.

Steckel and his colleagues at the University of Tennessee have found that sticking to this mixing order and protocol eliminated most of the foaming and pressure build-up they had seen initially in spray solutions in their research plots. University of Missouri scientists didn't find significant foaming or gas build-up in their jar tests with Sentris, regardless of mixing order. (See more from Missouri here: https://ipm.missouri.edu/…).

However, the University of Arkansas team was unable to find a mixing order that eliminated the foaming and gas build-up in their trials so far. Without knowing what other factors might be at play -- such as water pH, water quality, or tank mix partners -- Butts is recommending applicators seek out VaporGrip Xtra Agent to add to their dicamba-glyphosate tank mixes; if that isn't possible, add an anti-foaming product to the tank mix, and follow the recommended mixing order.

"When we added the foam breaker product, it at least eliminated the foam part," Butts said. "And the gas will be vented out by the sprayers."

So far, none of the scientists have received reports of mixing issues with VaporGrip Xtra Agent, nor observed them in their own spray solutions. Bayer representatives told DTN the company has not received any reports of foaming or pressure issues, either from farmers or in their own tests the past two years.

"Typically, we recommend [adding] VaporGrip Xtra Agent to the spray tank first during the mixing and filling process, with the carrier, while it is agitating," the company said in an emailed statement. "We would also stress that an applicator must always follow the precautions, restrictions, recommended use rates and application directions appearing on the labels for each product to be tank mixed. We also recommend a jar test as it is described on all pesticide labels to ensure compatibility with all products to be tank mixed."

Butts echoed the jar test recommendation for applicators using new products such as these VRAs this year.

"You can always mix it first in a bottle to see how it behaves with your water or your product lot number," he said. "We just want people to be aware of potential issues and pay a little extra attention this spring."

Read about the Arkansas scientists' experiments with Sentris here: https://arkansascrops.uada.edu/….

Brush up on VRA label requirements for all three dicamba herbicides here: https://www.dtnpf.com/…. 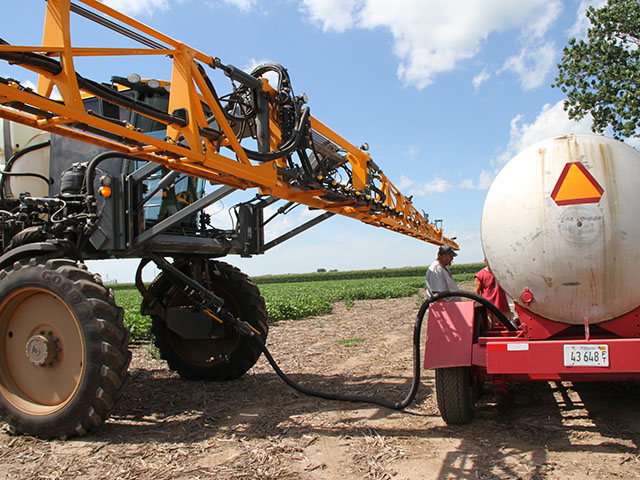