ROCKVILLE, Md. (DTN) -- Glufosinate herbicides, often sold under the Liberty brand, are in higher demand than ever before.

This year, nearly every herbicide-tolerant soybean trait on the market -- XtendFlex, Enlist E3, Liberty Link and LL GT27 -- contains tolerance to glufosinate. As a result, the number of growers spraying the herbicide for the first time each year is also on the rise.

"I see more and more growers using it every year it seems," said Brad Farrell, a crop consultant with Minnesota-based Centrol Crop Consulting. "It's another option to control tough weeds like waterhemp."

But the herbicide comes with its quirks, and first-time growers should brush up on them before spraying, cautioned Larry Steckel, University of Tennessee weed scientist. "Liberty is one of the most temperamental herbicides I've ever been around," he said. "Managing it correctly is the difference between success and failure."

Farrell agreed, noting that glyphosate's relative ease of use has not prepared growers well for moving to glufosinate. "A lot of growers got spoiled spraying Roundup," he said. "You could do a bad job and it still worked. Liberty is a flat-out different chemical, and that is something we have to drill into growers."

Proper management of glufosinate boils down to three major concepts: time of day, spray coverage and following up on weed control, Farrell and Steckel said.

And in this age of pandemic-scrambled supply chains, availability might be the first hiccup you run into.

"Supply is short -- even for generics," Steckel warned. "I've never seen it this tight."

If you want to watch a herbicide absolutely smoke weeds, spray glufosinate in the middle of a hot, sunny, humid day and watch it perform -- like "liquid fire," as Farrell puts it.

If you spray it too far outside any of those parameters, its efficacy will weaken, Steckel warned. Of those three -- heat, sun and humidity -- sunlight seems to be the most important, which means time of day is critical.

Heat and humidity matter, too. Growers in dry regions might see less efficacy, and control will weaken on cooler days, too, when daytime temperatures drop below 80 degrees and nights fall below 60 degrees, Steckel said.

Liberty is primarily a contact herbicide -- it can only kill what it touches. That means good spray coverage is essential.

For Farrell, that starts with plenty of water. Fifteen gallons per acre is better than 10, but he pushes growers to add the label maximum of 20 gallons.

Select your nozzles carefully, as well. Steckel recommends wide-fan nozzles, to increase your spray's reach. What you definitely don't want are the nozzles required in the Xtend system, which produce ultra-coarse droplets to discourage drift. Aim for medium to coarse droplets with glufosinate instead.

Adding ammonium sulfate (AMS) can also help with glufosinate's efficacy, especially in the face of low humidity or high pH water. Remember that it takes more AMS per gallon than glyphosate -- at least 1.5 lbs per acre all the way up to 3 lbs/acre.

No herbicide should be viewed as a standalone weed control option, and glufosinate is no exception, Steckel warned. According to the U.S. Geological Survey, the chemical's use swelled 180% between 2013 and 2017, and weeds have taken notice. Glufosinate-resistant Palmer amaranth has been officially documented in Arkansas this year: https://www.dtnpf.com/…

Scientists have also documented Palmer amaranth populations with resistance to dicamba and likely resistance to 2,4-D, so growers using Enlist or Xtend technology need to steward these chemicals carefully alongside glufosinate.

If you're spraying Enlist E3 soybeans, Steckel strongly recommends tank mixing glufosinate with Enlist One, which can help prevent weed escapes and stave off resistance to both herbicides. Liberty works well on most broadleaves, but can be weaker against grasses, particularly bigger ones, so grass control might require follow-up applications of glyphosate.

If you're spraying XtendFlex soybeans, tank mixing dicamba and glufosinate isn't an option, so a quick follow-up on any weed escapes is necessary, Steckel said.

"Timing is key," Steckel said. "For waterhemp and Palmer amaranth that escape dicamba applications, try to come back no later than seven to 10 days with Liberty. If you wait 20 days, you'll never catch up."

Keep in mind that glufosinate has no residual activity, Farrell added. Consider adding a Group 15 or Group 14 herbicide with residual, especially for early season glufosinate passes. 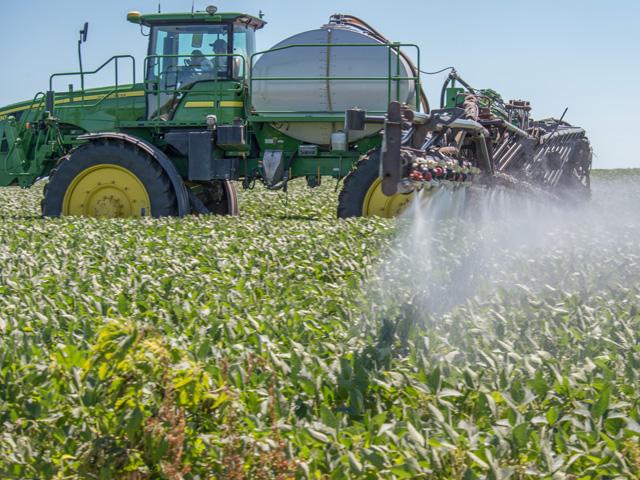