ANKENY, Iowa (DTN) -- Ian Plagge will apply 240 pounds of nitrogen (N) per acre this year on corn-on-corn acres and 190 pounds per acre on corn-after-soybeans.

Crunching the numbers on nitrogen applications is becoming increasingly important for the Latimer, Iowa, farmer and others, as nitrogen costs ratchet skyward.

"Nitrogen is often the most limiting yield factor for corn," said Vetsch. "Finding the right (N rate) can be challenging ... but you can calculate the optimum rate for a given region, state and crop rotation."

Plagge finished spraying half of the N -- mostly UAN32 and some UAN28 -- planned for this year's corn crop last weekend as part of a weed-and-feed mixture. The other half will be applied in-season before tasseling using Y-drops.

The row-crop farmer believes he'll apply enough N, but not too much, to meet his overall yield target of 240 bushels per acre if the weather and other limiting factors don't get in the way. Nitrogen totals break down to 1 pound for every bushel of expected yield for corn-on-corn and 0.8 pound for every expected bushel of yield for corn after soybeans.

"We're not real technical, but this works for our farm," said Plagge, who farms with family. "Corn after soybeans typically out yields corn after corn, but the yield goal is the same."

HOW MUCH NITROGEN TO APPLY ON CORN?

Vetsch said it's the No. 1 question he's been asked during a nearly 30-year career studying N management for corn.

With nitrogen and corn prices at or near all-time highs and water quality a growing concern, he said the push by farmers to apply the right amount of N to maximize yields, minimize expenses and protect water resources from leaching and runoff has heightened. But computing corn N rates to meet economic and environmental goals isn't easy. The weather, N form, soil type, geography, yield goals, application timing and other variables complicate the task.

Climbing corn yields -- an average of about 2 bushels per year since the 1950s, according to USDA data and calculations by Bob Nielsen of Purdue University -- further complicate matters. Vetsch said farmers often ask if N rates need to climb as well.

"The answer is both yes and no," he said. "You may need more fertilizer if your soil has low N supplying power like if it's coarse textured with low organic matter. But current corn genetics and hybrids are much more efficient utilizing N to produce grain than 20 to 30 years ago.

"You may need a little more N due to higher yields but not a lot more," Vetsch added. "In my experience, yield increases and N needs aren't proportional."

Former DTN Contributing Agronomist Dan Davidson wrote a column in 2016 -- Nitrogen Math: Simple Calculations Give You the Right Rates -- to help growers grappling with N application decisions. The column, which can be found at www.dtnpf.com/agriculture/web/ag/crops/article/2016/03/21/nitrogen-math-simple-calculations, continues to be a go-to source for many farmers seeking information on the topic, based on views on www.dtnpf.com.

Vetsch said all of Davidson's N calculations apply today, except for UAN28. He said farmers should use 3 pounds of N per gallon and not 2.9 pounds in their calculations.

"Gone is the day when we could use the old Iowa State approach of 1.2 pounds (of N) per bushel expected yield and take a credit for soybeans (1 pound per bushel soybean yield) if in a corn/soybean rotation. That seemed to work when N was inexpensive, hybrids weren't efficient, most N was put on pre-plant (fall) and we didn't worry about losing nitrates into our watersheds and the Gulf of Mexico.

"Today N is expensive, corn price is low (Editor's Note: Not the case in 2021), and we can't let N escape into the environment," he continued. "Today's corn hybrids also are much more nitrogen efficient, and continuous corn is common. We see rates of 0.9 to 1 pound per bushel and some farmers are even pushing it to 0.7 to 0.8 pound per bushel yield goal. In general, I believe the 1 pound per bushel expected yield works quite well, but we need to take the right credits and apply that N smartly to protect it from losses."

If a farmer's corn yield goal is 180 bushels per acre following soybeans, Davidson recommended 140 pounds of N or a ratio of 0.78 pounds per bushel. That N total applies if one-third is applied in the spring at planting and the rest is side-dressed and if organic matter is 2.5% or higher to mineralize additional N from the soil.

May corn futures on the Chicago Board of Trade hit $7.20 per bushel on April 28, 2021. That's more than double the May futures contract nine month ago and the average farm price for corn in 2016, according to USDA data.

Nitrogen prices have skyrocketed during the past year, according to the latest DTN survey of fertilizer retailers -- www.dtnpf.com/agriculture/web/ag/crops/article/2021/04/28/fertilizer-price-increases-slow. On average, anhydrous ammonia, urea, UAN28 and UAN32 cost $707, $510, $348 and $391 per ton, respectively. Prices have increased in the last year for these popular N products from 32% to 47%.

Plagge said if N prices are still high in the fall when next year's allotment is booked, he will likely cut N rates for 2022 to save money even if corn prices remain high.

The Plagge family has experimented with variable-rate, in-season N application in the past to reduce rates and maintain productivity. More could be done next year, Ian said.

Vetsch believes one of the best tools farmers can use to determine optimum N rates for corn is the Maximum Return to Nitrogen (MRTN) calculator. It was developed in the mid-2000s by university researchers and nutrient specialists in seven Midwest states. Find the MRTN calculator here: http://cnrc.agron.iastate.edu/….

Corn growers in Minnesota, Wisconsin, Illinois, Indiana, Iowa, Michigan and Ohio can input data such as the state they farm in, what crop corn is following, corn price and N form and price to find the optimum N application rate and range. The calculator uses decades of N research trial data from each state or region within a state, which is continually updated.

"If you think of the law of limiting returns, as you get close to the optimum N rate, the amount of grain produced for the amount of extra N applied gets less and less," Vetsch said. "You get to the point that more N doesn't give you more yield and your returns decline.

"What we don't like to see is growers putting out extra N as insurance, not knowing what the weather conditions will be," he added. "That's probably not giving you a return on investment during a normal growing season and it increases the risk to the environment (unused nitrogen leaving field and polluting the water)."

The seven states included in the MRTN calculator produced 58% of the 14.2 billion bushels of corn in the U.S. last year, according to USDA data. For farmers in other states, Vetsch recommends they start with N recommendation guidelines from land grant universities when making N rate decisions. 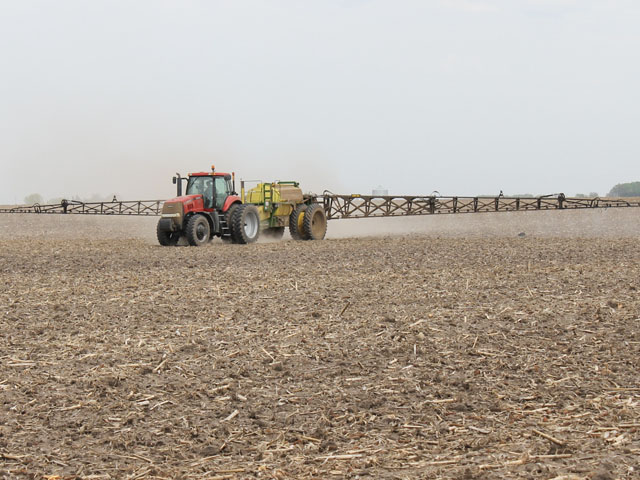