ANKENY, Iowa (DTN) -- It is a year of firsts for grain sorghum and some farmers who grow the crop. As a result, acres and prices are on the rise this year and possibly in the future.

Kody Carson of Olton, Texas, won't plant corn for the first time this spring in order to seed more sorghum. A field in Kansas farmed by Kent Winter has never been planted to sorghum before, until this year.

"The sorghum industry is seeing more positive momentum than I can remember during my farming career," said Carson, National Sorghum Producers (NSP) chairman, during the association's virtual industry forum on March 1. He started farming in the mid-1980s.

China made its first purchase of U.S. grain sorghum for the 2021-22 marketing year a record 342 days before it starts on Sept. 1, according to USDA data. It bested the previous first new-crop sale to an export customer, which was Mexico in 2010, by 13 days.

Since China's initial new-crop buy of 5 million bushels (mb), importers (mostly China) have booked an additional 35 mb of sorghum as of mid-April for the upcoming marketing year. The 40-mb-total for that time smashed another record, which was also set by China in 2014 at 11.5 mb.

Old-crop sorghum is sailing out of ports in record-setting fashion too. The USDA announced on April 15 the previous week's exports were 33.9 mb -- enough to fill 10 to 12 Panamax vessels, according to NSP -- topping the previous high by more than 10 mb. The top destination was China. The big week brings the export total for the 2020-21 marketing year to 251 mb, which is 44 mb less than the projected total for the marketing year that ends on Aug. 31.

"(Sorghum producers) should have a positive year unless something occurs that is out of their control, such as a change in trade policy," he said.

Recent unprecedented demand and prices hikes, along with weather-related factors, was a strong signal for Carson and other farmers to plant more sorghum this year. Nearly 7 million acres are projected to be seeded, up 18% from 2020, according to the USDA Prospective Plantings Report released March 31.

The average sorghum farm price was $3.34 per bushel in 2019-20, according to the USDA. The agency in April projected the average farm price for the current marketing year at $5.05 per bushel, though prices have exceeded $6 per bushel. In mid-April, Hultman said the new-crop bids at some interior elevators were more than $5.60 per bushel.

Sorghum prices soared the past year primarily due to China's insatiable appetite for the cereal grain to feed livestock and make an alcoholic drink called baijiu. The country continues to rebuild its hog herd after it was decimated by African Swine Fever. China is also gobbling up U.S. commodities in an attempt to meet its obligations of the Phase 1 trade agreement.

"Trade is extremely important. It represents a large value coming back to farmers," Lopez said.

Low cost of production is another big advantage for sorghum over other row crops, Hultman said.

U.S. grain sorghum yields averaged 73 bushels per acre (bpa) the past three years. It's not uncommon for yields to exceed 100 bpa or be double or more the national average. At $5.60 per bushel, profit potential for the 2021 crop of $80 to well over $100 per acre exists with less financial risk than other row crops.

Hultman warns sorghum farmers that prices rise and fall with Chinese demand, which typically accounts for more than 80% of U.S. sorghum exports and a bulk of production. Farmers may want to consider locking in favorable prices during planting season for at least 25 to 50% of expected production, Hultman said, as hedge against trade uncertainty.

"China either makes this market or shuts it down," he continued. "That's the roll of the dice with sorghum."

A nearly 100-acre tract of land that Winter farms on shares near Mount Hope, Kansas, will be planted to grain sorghum for the first time this spring.

"The landowner told me years ago he didn't like sorghum ... he was more interested in corn and soybeans (to make money)," said Winter, president of the Kansas Grain Sorghum Producers Association. "I got a call last November from the landlord asking me to consider raising grain sorghum on his land. He realized the profit potential of sorghum."

Winter plans to increase his full-season sorghum acres to 300 acres this year (planted in early June) and lower corn and soybeans plantings to 225 acres each. Last year, acreage between the three crops were split equally. Winter also produces 750 acres of hard red winter wheat and 100 acres of alfalfa.

After the wheat harvest in mid-June, Winter intends to plant 200 acres of sorghum and 200 acres of soybeans into the stubble if there's adequate moisture for seed germination. Both are an expansion of double-crop acres.

"I think sorghum is in a prime position to increase acres," Winter said.

Sorghum profit potential, which Carson called "very exciting," is part of his decision to up acres at the expense of corn. But his primary reason is risk mitigation. Sorghum's low cost of production and ability to withstand heat and moisture stress during an ongoing drought makes it a better choice to plant than corn.

Most of Carson's land is irrigated, but wells only pump a fraction of what they used to due to the dwindling Ogallala Aquifer. Carson is more reliant on rainfall, but only 5 inches has fallen in many of his fields since November of 2019. During the latest drought, he has almost entirely relied on irrigation to grow crops. It's no longer enough for corn.

"Sorghum is a savior for us," Carson said in an interview with DTN. "It's a sustainable, water-sipping crop."

It takes a minimum of 11 inches of moisture to produce the first bushel of corn while sorghum takes 7 inches, said Brent Bean, USCP agronomy director. He said sorghum is usually more productive than corn when water availability is 15 inches or less.

Average sorghum and corn yields in Kansas last year were 85 and 134 bpa, respectively, according to USDA. Bean said it takes about 16 inches and 23 inches of water, respectively, to achieve that production.

Spring and summer temperatures are expected to be several degrees above normal and precipitation below normal for the Southern and Central Plains states where most of the sorghum is grown, according to DTN Senior Ag Meteorologist Bryce Anderson.

"Sorghum is a real hardy crop that can do a lot with a little (moisture)," he said. 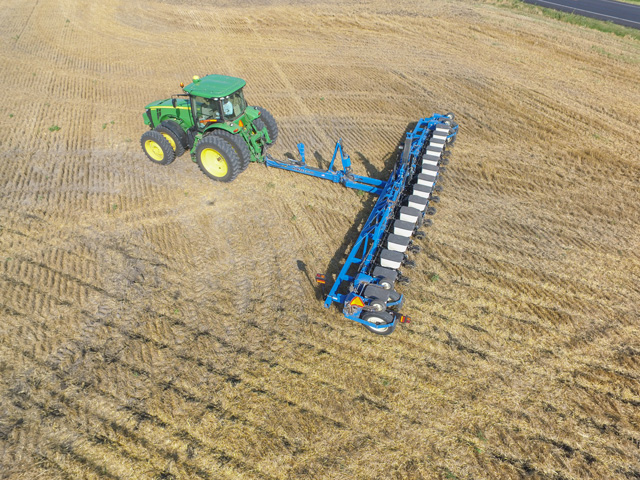