ROCKVILLE, Md. (DTN) -- Corteva Agriscience has pulled the plug on a new developmental dicamba product, the last in a series of moves over the past year to divest itself of controversial pesticides.

The company opted to end the EPA registration process underway for a novel dicamba herbicide containing a dicamba choline salt -- a different form of dicamba salt from any past or currently marketed dicamba herbicides.

"Corteva Agriscience has made a business decision to withdraw its developmental dicamba product from EPA consideration for registration," company Media Relations Manager Kacey Birchmier told DTN in an email. "The EPA registration process has not yet been completed for this submission."

The dicamba-choline product was an attempt to create a less-volatile formulation of dicamba, which continues to be implicated in widespread reports of off-target injury that have resulted in three EPA label revisions and many lawsuits against dicamba manufacturers Bayer and BASF. Corteva was moving ahead with the product's development last year, which included submitting it to EPA for registration -- a process the company has now voluntarily ended, Birchmier said. This appears to be the end of the road for the dicamba choline herbicide, without a clear buyer on the horizon.

"While Corteva routinely collaborates with third parties to commercialize products for the benefit of farmers and the market in general, this product concept has not received regulatory approval, nor has Corteva identified an interested licensee or collaborator," Birchmier said.

This marks the second move by the company to distance itself from the dicamba-tolerant Xtend cropping system. In February, Corteva announced it would be voluntarily discontinuing its sales of FeXapan, another dicamba herbicide based on Bayer's XtendiMax product, but marketed by Corteva. The company first sold the product in 2017, and even attempted to defend it in court after the Ninth Circuit Court of Appeals vacated its registration, along with two other dicamba herbicides, in June 2020. See more here: https://www.dtnpf.com/….

Corteva representatives have framed these decisions as a necessary pivot toward their own herbicide-tolerant platform, Enlist crops, which tolerate over-the-top applications of 2,4-D-choline, glyphosate and glufosinate and -- like many other herbicide-tolerant crops -- are susceptible to dicamba injury, particularly in soybeans.

"We made a strictly business decision to discontinue the sales of our own branded version of dicamba [FeXapan]," Corteva CEO Jim Collins told DTN in a previous interview. "There are a number of other really great brands out there. When we initially launched that product, we thought we needed it in our lineup to have a total package around the grower. But as we start to pivot and see continued very strong demand for the Enlist technology, we decided it was best to just focus there."

Enlist crops are widely viewed as a major competitor to Bayer's dicamba-tolerant Xtend crops. While Corteva seed brands still offer dicamba-tolerant Xtend crop traits, the company is focused on ramping up its Enlist offerings, particularly its soybeans, Birchmier said. Corteva is aiming for Enlist E3 soybeans to account for 30% of U.S. soybean market share this year, with a long-term goal of 50% market share.

Dicamba is not the only controversial chemical Corteva has voluntarily discontinued recently. In February 2020, the company took the industry by surprise with an announcement that it would stop selling its chlorpyrifos insecticide, marketed as Lorsban and currently undergoing a registration review by the EPA. The insecticide is used primarily in soybeans, corn, wheat, cotton and orchard crops to control biting and sucking pests, such as aphids.

The company cited falling demand for chlorpyrifos, whose use had declined from heights of 13 million pounds per year in the late 1990s, down to 5 to 7 million pounds per year starting around 2010, according to the U.S. Geological Survey. But part of that fall was driven by chlorpyrifos' long history of legal issues, starting with EPA fining its original registrant, Dow Chemical, nearly $1 million in 1995 for not disclosing reports of human health problems from the chemical's use over the previous decade. The EPA reached an agreement with Dow to end all household uses of chlorpyrifos in 2000, but the legal challenges continued, especially after research showed a link between the pesticide's use and neurological problems in children. By 2015, the Obama EPA had decided to revoke all food residue tolerances for the insecticide, which would effectively end most, if not all, uses. But that decisions was suddenly reversed in 2017 by then-EPA administrator Scott Pruitt, and EPA forged ahead with its work on a renewed registration of chlorpyrifos.

As a result, Corteva's 2020 announcement that the company -- the primary registrant of chlorpyrifos and the chemical's largest producer -- would be voluntarily discontinuing the product led to a remarkable situation: An agrichemical company ditching a contentious product, despite its governing regulatory body -- the EPA -- insisting on keeping it on the market. See more here: https://www.dtnpf.com/….

Corteva's decision increasingly looks like a prudent one, however, in light of the Biden EPA's renewed scrutiny of chlorpyrifos. The agency's new leadership has vowed to re-examine controversial Trump-era regulatory decisions, including the sudden reversal on chlorpyrifos. See more here: https://www.dtnpf.com/….

The recent decisions regarding dicamba and chlorpyrifos also set Corteva apart from its fellow agrichemical giants, many of which are embroiled in multiple legal challenges over pesticides. Bayer and BASF, for example, are forging ahead with newly registered dicamba products, even as both companies are also actively appealing a jury verdict that awarded $265 million (later reduced to $75 million) to a Missouri peach orchard injured by dicamba. Bayer is also actively working to disperse a $300-million settlement to soybean farmers whose crops were injured by the herbicide in the past five years, and both companies face at least two major legal challenges against their newly registered dicamba herbicides in federal courts. See more here: https://www.dtnpf.com/…. Bayer is also working to develop and register dicamba-tolerant corn, as well as continuing to defend its glyphosate herbicide, Roundup, against legal claims and judgements alleging its link to certain cancers.

But for now, Corteva has washed its hands of its most legally troubled pesticides, clearing the way to focus on its biggest growth area: Enlist crops.

"All of our resources, all of our energy can be focused on customers, applicator training, sales and distribution to make sure that the Enlist system is positioned properly going forward," Collins said in his previous DTN interview. 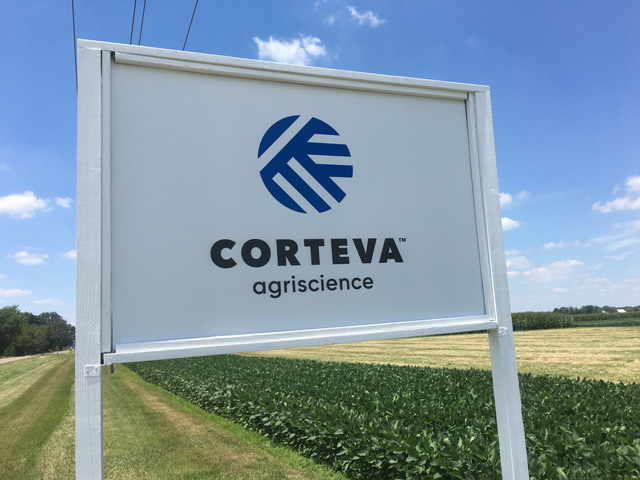