ROCKVILLE, Md. (DTN) -- Insects and diseases are waking up and getting to work, and here at DTN, we have a growing inbox of pest alerts from across the Plains, Midwest, South and mid-Atlantic region.

Here's what we're hearing this week:

In Texas and Oklahoma, it's shaping up to be a good spring for rust diseases, which love moderate temperatures and plenty of moisture, said Bob Hunger, Extension wheat pathologist for Oklahoma State University.

Texas scientists have spotted leaf rust and stripe rust spreading across southern Texas, and in Oklahoma, Hunger has spied both diseases cropping up in wheat fields near Stillwater and Perkins -- the north-central region of the state. Hunger also discovered powdery mildew and Septoria/Stagonospora lurking at these locations.

"(W)ith the relatively cool and windy weather in the forecast, I expect the incidence and severity of all these diseases to increase," he told growers in his wheat disease update. See more here: https://osuwheat.com/….

"Army cutworms are again relatively common this year, however, thus far, not nearly as destructive as last year," he wrote in his Kansas Insect Newsletter. "This could be because infestations are much reduced compared to 2020 -- or that growing conditions have been much better than last year for both alfalfa and wheat."

A quick tip from Whitworth? Watch for birds or skunks feeding in your alfalfa or wheat fields; that's a tipoff that they are finding a cutworm larvae buffet there. See Whitworth's newsletter here: https://entomology.k-state.edu/….

'Tis the season for another type of cutworm, black cutworm, as well as another migratory spring moth, true armyworm, added University of Delaware Extension Entomologist David Owens in his Weekly Crop Update. Like many of their Midwestern and mid-Atlantic colleagues, Delaware scientists are setting up moth traps for these pests and will release numbers each week. Knowing the time from egg laying to hatching (roughly five to 10 days) will give growers a chance to start scouting their emerging crop fields for the fast-moving damage the larvae of these two pests can inflict.

Some of those traps are already filling up. Iowa State Extension Field Agronomist Angie Rieck-Hinz has already pulled in a high number of moths from a trap in central Iowa on April 6, she reported on her Twitter feed. See more here: https://twitter.com/….

In more exotic pest news, Pennsylvania crop scientists are starting an unpleasant new annual task of warning growers in the mid-Atlantic region to be on the watch for the spotted lanternfly, an invasive and damaging insect that targets more than 70 different kinds of plants, including horticultural, orchard and row crops.

The insect first appeared in Berks County, Pennsylvania, in 2014 and has since spread to 34 counties in the state and into New Jersey, New York, Ohio, Connecticut, Maryland, Delaware, Virginia, and West Virginia. But Midwest growers should be on the watch too -- it's an excellent traveler, scientists have discovered, with eggs hitching rides on just about any smooth surface, including lumber and truck bumpers.

Don't see a pest mentioned from your region? Let us know! 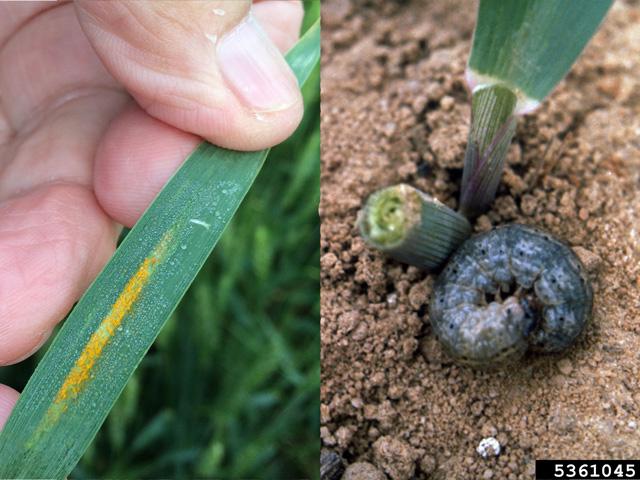