ROCKVILLE, Md. (DTN) -- The volunteer corn that emerges in Matt Stalzer's fields this spring will be just one more reminder of the derecho that flattened thousands of acres of his family's cornfields last August.

Volunteer corn is an annual springtime problem, but last year's extreme weather -- namely that fierce Midwest derecho -- means farmers should brace to see more of it than normal and have a plan to manage it, crop and weed scientists told DTN. They pinpointed three big questions farmers will face when trying to assess their volunteer corn risk: how much of your downed corn is likely to germinate, what herbicide-tolerant corn genes are you facing and what crop are you planting into?

On Stalzer's family farm near Haverhill, Iowa, they quickly disked down their flattened corn and then used tillage again in the fall to squash the first wave of volunteer corn that emerged. This spring, they are bracing for a second round of battle with volunteer corn kernels that survived the winter.

"The disked fields will have a lot more volunteer corn," said Stalzer. "We hope it gets warm this spring and germinates, and then we'll come in and field cultivate and tear it out before we plant." Any tillage escapes in his fields will face a pre-plant application of herbicides, carefully selected for the intended springtime crop.

Here's what to expect in your fields.

HOW MUCH VOLUNTEER CORN SHOULD YOU EXPECT?

Millions of bushels of corn were left on the ground in the wake of the fierce derecho winds on Aug. 10, 2020. But that doesn't mean every single corn kernel that fell to the ground will be sprouting this spring.

At issue is the corn crop's stage of maturity when the derecho hit. At that time, most corn in the storm's path was around 20 days or more from full maturity, known as black layer formation, when the seed stops accumulating dry matter and is fully prepared for drydown, said Susana Goggi, a seed scientist with Iowa State University.

Those kernels were developed enough that the hormones inside them that keep germination at bay were dropping, Goggi said. That means the seeds could -- and did -- sprout in the fall when farmers like the Stalzers caught and controlled them with tillage or herbicides.

But those seeds were not yet ready for the drydown process required for a seed to survive the freezing winter and germinate again in the spring. "So, when the season ended and the corn dried down in the fall and went through freezing temperatures, those seeds were likely killed and very, very few of those would have survived," Goggi explained.

That's why when Iowa State University weed scientist Bob Hartzler recently experimented with a germination test on some fallen corn ears from a derecho-damaged field, he found only about 6% of the corn kernels on the ears sprouted. Those sprouted kernels were likely from corn plants that were able to limp along until they reached black layer in the damaged field, which allowed them to safely dehydrate and survive the winter, Goggi said.

However, even those derecho-damaged fields that didn't get disked down until after the corn seed was mature and had dried down aren't likely to produce vigorous volunteer corn plants, Goggi said.

"Plants that were bent or damaged could have produced seeds," she explained. But those seeds wouldn't have developed fully because they wouldn't have had enough sugar from photosynthesis. "As a result, they are likely not vigorous seed, but of course they can still germinate if they are in the ground with good conditions," Goggi said.

Ultimately, growers should still brace themselves for a high number of volunteer corn plants this spring, Anderson said. "We're hopeful that this means we won't see the astronomical numbers of volunteers we would have thought," she said. "But populations will still be high. Even if only half a percent of the corn that was knocked down comes up in the spring, that's still a lot more than we would normally see."

WHAT KIND OF HERBICIDE-TOLERANT CORN WILL YOU FACE?

Most growers of commercial field corn are aware the hybrids sprouting in their field next year will likely be glyphosate tolerant. But, for growers who plant Bt-traited corn targeting above and below-ground insects, there is a good chance their hybrids will also be glufosinate tolerant.

Several of the Bt traits expressed in corn hybrids are genetically linked with the glufosinate-tolerant Liberty gene, which allowed researchers to track the traits in their corn trials, explained Bill Johnson, Purdue University weed scientist. As a result, many volunteer Bt corn hybrids won't be killed by glufosinate this spring, with the exception of some products such as YieldGard VT Triple, Double Pro, Triple Pro and Trecepta hybrids.

WHAT CROP ARE YOU PLANTING INTO?

The Stalzers are using tillage this spring as a first line of defense against volunteer corn plants in their derecho-damaged fields, which is one of the most effective ways to tackle the problem, Purdue's Johnson noted.

"Once soil temperatures are above 50 degrees and you get some sunny, dry days, you will start seeing corn germinate," he said. "If you can delay corn planting a little and do some pre-plant tillage, that's probably the most foolproof way to control them."

But for no-tillers -- and tillage weed escapes -- herbicide applications will be the primary tool in the fight to clear your field before planting.

If possible, rotate to soybeans, which opens up the list of grass herbicide options you can use without problematic plant-back restrictions, Johnson said. The Stalzers, for example, are planning to clean up volunteer corn with the Group 1 herbicide fluazifop (Fusilade) in their soybean fields this spring.

If you decide to stay with a corn crop in the spring, be prepared to do some chemical puzzling, particularly for glufosinate-tolerant volunteer corn plants, which take Liberty applications off the table, Johnson said. "The problem is that anything you spray to damage volunteer corn will also damage your real corn crop," he said.

Your options are narrowed to using clethodim (Select), which has a pre-plant interval for corn, and can also have antagonism issues when tank mixed with common plant growth regulator burndown options such as dicamba or 2,4-D, Johnson warned. Antagonism is more likely to cause a problem on larger corn plants so it will be key to spray this mixture on small volunteer corn plants, he added.

Another option is a paraquat-triazine burndown tank mix; but remember contact herbicides like paraquat can only kill volunteer corn plants when their growing point is above ground. So, the most successful applications of this tank mix will be on 7- to 10-inch corn plants, or the V5 growth stage, Johnson said. "Otherwise, you'll just burn off the tops and the plant will still keep growing," he warned.

For more details on how to tackle volunteer corn plants this spring, see this comprehensive look by Iowa State's Meaghan Anderson: https://crops.extension.iastate.edu/…. 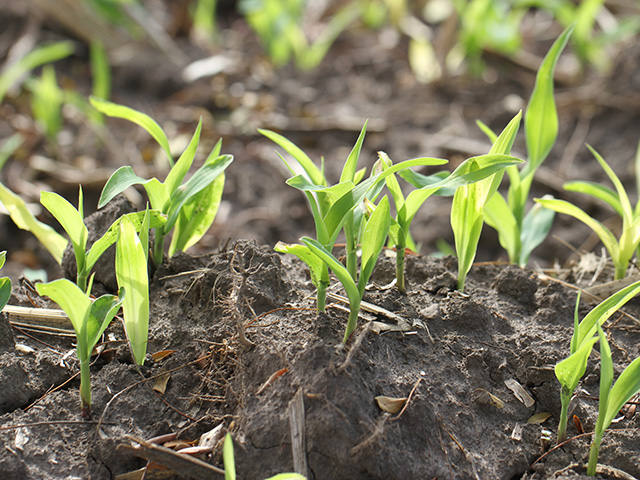