The year 2019 was an eye-opener for Lewis Stearns, the founder of the consulting company Progressive Crop Solutions. European corn borers were taking a serious toll on the corn fields of several clients.

"I wasn't super accustomed to seeing these insects, because Bt corn has been part of the market as long as I've been around," said Stearns, from Bloomdale, Ohio. He's 29 and has never known anything other than genetically modified (GM) crops. In fact, the first commercial GM crops, introduced 25 years ago, incorporated the bacterium bacillus thuringiensis (Bt) specifically to fight pests like European corn borers.

For the last few weeks, DTN/Progressive Farmer has been exploring the past and future of genetic engineering breakthroughs in agriculture. In this, the ninth and final story of our special series -- called Gene Revolution Turns 25 -- read about how, when holes began to appear in genetically engineered technology designed to control weeds and pests, some growers returned to time-proven practices of previous generations.

GROWN UP WITH GM TECH

Stearns is part of a generation of farmers that has grown up with GM technology, which now is engineered into most primary row crops with multiple modes of action against pests and weeds.

However, documented cases of resistant insect and weed populations are on the rise because of overreliance on certain traits and not diversifying management practices.

"We're kind of back to where we were 30 years ago," said Bill Johnson, longtime weed scientist at Purdue University. "Our weed control and tank mixes had gotten very complex by the early '90s. We had three- and four-way mixtures and adjuvants to try and beat things back like waterhemp and cocklebur. We'd gotten really good at understanding tank mixes and adjuvants."

Not that anyone needs or wants to return to that era, but farmers did lose some understanding of weeds and their control, Johnson said. Some of that knowledge is now having to be relearned.

Transgenic traits that endowed crops to remain unharmed from herbicides, such as glyphosate, allowed producers to lose their appreciation that smaller weeds are easier to kill, Johnson explained. The utilization and setup of a sprayer, along with incorporating preplant herbicides and between-row cultivation is "kind of a lost art."

Stearns believes GM crops have saved farmers on pesticide costs and time spent spraying while using a herbicide (glyphosate) that he contends poses fewer health risks than the alternatives.

As time goes on, Stearns also is having to learn more about weed control and chemistries with multiple modes of action because of weed resistance.

"Initially in our area, marestail was a big issue," Stearns said. "Now, there is fall spraying with either 2,4-D or dicamba, and now you hardly hear about it." The focus then shifted to waterhemp in an effort to keep it from germinating in the first place. "Once it is growing, it's really hard to stop," he said. "You can't kill it much over 4 inches tall."

The ease of farming using genetically modified glyphosate-tolerant crops "pretty much destroyed the herbicide-development industry," said David Franzen, extension soil specialist at North Dakota State University. "Why would a company spend tens of millions of dollars to bring a new product to registration and have to compete against something (glyphosate-resistant crops) with 98% of the market?

"Even if they start development of new technology today with new modes of action, it will take years to bring something to market that will be different," Franzen explained. Crops tolerant to glyphosate and other herbicides have helped create "weeds stronger than anything we've ever seen before. We're back to the future, but now the spectrum is different, and the number of herbicide groups to which there are resistant weeds is greater."

"This year, we sprayed everything with herbicide, all 4,000 acres, in eight days," he said. "It was a long eight days, but what would it have been without GM crops? Even more days? Weeks? Months?"

"I think of the time saved that I can be with my family," Nelson said. He and wife, Jill, have four young children. "Would we even have a 32-row planter if there was no GM corn?"

Probably not; Purdue's Johnson and North Dakota State's Franzen agreed. The ease of operation that GM crops ushered in allowed farms to grow, which pushed machinery to become larger.

Kari Olson, 24, farms with her father near Hawley, Minnesota, on less than 3,000 acres growing corn, soybeans and wheat. She's thankful for the GM seed options that she's grown up with, especially because the operation is 100% no-till.

"This modern technology has allowed us to maximize our yields on less acres and resources while reducing crop loss, pesticide and fertilizer use," Olson said. She conceded that weed resistance has started to become an issue in the region.

"I am hesitant to have another variety tolerant to glyphosate," she said. "My reasoning being, we need different modes of action from chemicals in a crop rotation to prevent the increase in glyphosate-resistant weeds."

In 1991, Franzen studied at the University of Illinois the possibility of plants becoming resistant to certain herbicides. "It wasn't hard to work out the scenario," he said. "There are millions upon millions of seeds per acre in these weeds. Did we think they wouldn't somehow segregate into those that can survive a particular mode of action versus those that won't? That's how selective breeding works."

"I would have limited the amount of glyphosate and Roundup Ready soybean that each user could purchase so they had to be better stewards of the product," Johnson said. "Also, bundling glyphosate with other herbicides would have forced growers to have more diverse weed-control programs, as well."

He believes such measures would have forestalled resistance issues for at least another decade.

Franzen said the new generation of farmers has to learn what their fathers and grandfathers had to learn: "weed and insect identification, integrated pest-management strategies, herbicide phytotoxicity potential to crops and crop-rotation restrictions from the use of some pesticides." 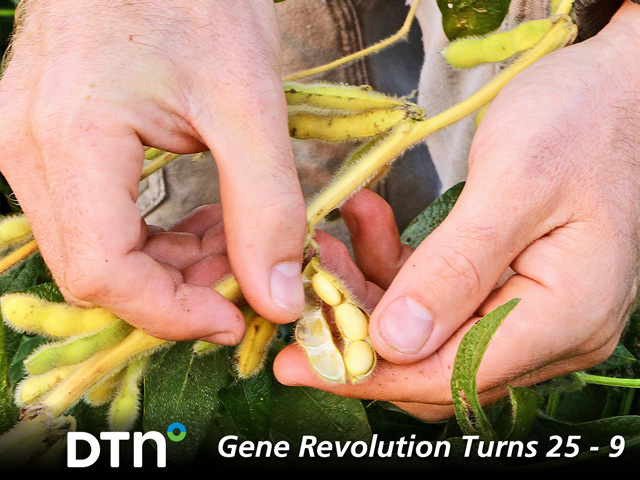