DTN is running this special series called Dicamba Rules Update to explore the new dicamba labels. In the second story of the series, DTN explores how dicamba spray windows will vary by state in 2021, and how growers should plan accordingly.

ROCKVILLE, Md. (DTN) -- Once again, dicamba applicators will face varying state cutoff dates for applications of XtendiMax, Engenia and Tavium in 2021, despite EPA's attempt to squash this practice.

When EPA released its new, five-year labels for these products last fall, the agency set nationwide cutoff dates for their use: June 30 for soybeans and July 30 for cotton. But at least three states have taken steps to push those dates earlier into June and May. Other states are working to expand those dates for their growers, to accommodate late-planted soybeans and cotton fields.

In addition to setting nationwide dicamba spray dates, EPA took another step to limit state-by-state dicamba rules proliferating this year. When it released the 2020 labels, the agency informed states they could no longer issue annual Section 24(c) labels with stricter cutoff dates, a common practice in past years. (See more here: https://www.dtnpf.com/…)

However, states still have the authority to further restrict federal pesticides via their own state rulemaking or statutes, and as of press time, three states have done just that:

-- INDIANA: The Office of Indiana State Chemist is using an existing state statute to designate dicamba as a "highly volatile" pesticide. That gives state regulators the ability to issue statewide annual permits for applicators that will ban dicamba applications after June 20 through Sept. 1. The permits will apply to the new over-the-top dicamba herbicides, as well as all other agricultural use herbicides containing 6.5% dicamba or higher.

-- ARKANSAS: The Arkansas State Plant Board voted to renew its May 25 cutoff date for in-crop dicamba use for the 2021 season. There is one exception: Growers who farm within the Mississippi River levee may follow the federal cutoffs via a permit.

-- ILLINOIS: The Illinois Department of Agriculture filed emergency administrative rules for dicamba applications on soybeans in 2021, which ban applications after June 20 and when the temperature exceeds 85 degrees Fahrenheit.

Farmers in these states should pick their soybean herbicide-tolerant platform accordingly, said Bill Johnson, Purdue University weed scientist. "When you look at the rationale behind the (Indiana) state chemist implementing this rule, there is no wiggle room for double-crop soybean growers," he cautioned Indiana growers at the annual Purdue Crop Management Conference this winter. "Double-crop soybean growers should use a technology that allows you to spray after June 20."

Don't plan on any last-minute cutoff extensions for poor weather either, Johnson added.

"Our state chemist office will hold firm on that date and they've made that very clear to registrants," he told DTN.

A growing number of states are in the process of extending the federal dicamba cutoff dates, via Section 24(c) labels, which still allow states to add new uses to federal pesticides.

Officials in these states want to accommodate late-planted soybean and cotton fields, which could require dicamba applications beyond June 30 and July 30 in those crops, state regulators told DTN.

So far, states seeking to expand the federal dates via 24(c) labels include Alabama, Mississippi, North Carolina, Oklahoma, and Texas. A slew of other Southern states, including Georgia, South Carolina, Tennessee and South Carolina, are also considering this route.

The process has not been easy, however. In an effort to guard against future lawsuits, the EPA is demanding extra data and evidence from state regulators to prove they need these expanded spray windows and can safely increase dicamba use beyond the federal label, North Carolina pesticide regulator Pat Jones told DTN.

States such as North Carolina are struggling to figure out how to meet these new demands and generate the necessary data in time, Jones said. "If these new requirements would have been communicated to us earlier, we could have known the new standards we are now being held to," he told DTN.

KNOW YOUR RULES AND PLAN AHEAD

Given this complexity unfolding, applicators or farmers planning to apply dicamba herbicides in 2021 should make sure they are aware of their states' current rules on the herbicide and plan accordingly.

For example, growers with XtendFlex crops, which tolerate glyphosate, dicamba and glufosinate, should consider making dicamba applications early in the season, before cutoff dates and hot weather arrives, and rely on glufosinate for later season applications, Johnson advised. Keep in mind that glufosinate will not control weeds much larger than 4 to 5 inches, he added.

For a handy chart that breaks down the changes in the new dicamba labels, see this DTN story here: https://www.dtnpf.com/… 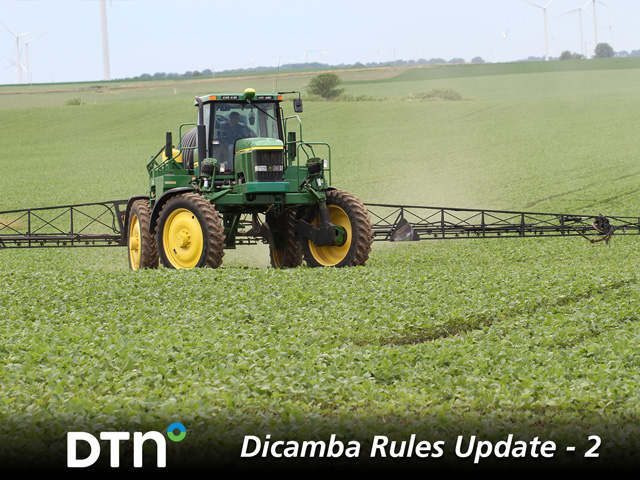