ROCKVILLE, Md. (DTN) -- Kenneth Rose has decades of farming under his belt, but last week's arctic blast was the coldest air he has ever experienced in western Oklahoma.

"It was the longest and coldest spell of my lifetime -- 74 years," said Rose, who farms near Keyes, Oklahoma. In the early morning hours of Feb. 15, the mercury sank as low as -21 degrees on his farm, and Rose believes his already droughty wheat fields will not live to tell the tale.

"I'm sure winterkill will be significant," he said. "I see a lot of poor stands and very small wheat around my area in the Panhandle, but farther down in the state, where they had fall moisture, the wheat looked pretty good before the cold."

Rose's assessment is playing out across the Southern Plains, where winter wheat fields faced a range of conditions that will influence their risk of winterkill, including drought, snow cover amounts and varying stages of development, wheat experts told DTN.

"Ultimately, it will be field by field," explained Amanda de Oliveira Silva, Oklahoma State University's small grains Extension specialist. "It's going to depend on development and stage of the crop, the amount of time it was exposed to low temperatures, and whether there was snow present and soil moisture."

Patience will be key, added Romulo Lollato, wheat and forage Extension specialist with Kansas State University. "I know we all want to run out this week and dig up some plants, but I'm thinking we need at least two to three weeks of warmer temperatures before we start seeing some green leaves coming out of it," he said.

The cold front that sank deep into the center of the U.S. last week seemed almost designed to target wheat fields, with historic lows recorded in the wheat-heavy regions of Colorado, Kansas, Oklahoma, and Texas, many of which were already facing drought conditions, noted DTN Senior Ag Meteorologist Bryce Anderson.

"There's plenty of reason to be concerned about winterkill in the Southern Plains wheat areas," Anderson said. "Last week's cold wave took temperatures to 15 to 25 degrees Fahrenheit below zero. This was the coldest that the region has seen in over 30 years, dating back to the late 1980s, and some record lows were posted that went way back to the late 1880s."

In Texas, where soil moisture levels are very low, the unusually cold temperatures could have damaged more developed wheat, if the growing point had inched above ground and up into the stem. As of Monday, USDA had pegged Texas wheat at 19% heading. "The cold would have been devastating to heading fields," said Fernando Guillen-Portal, small grains and oilseed Extension specialist at Texas A&M.

That was the one major reason Rose's fields were so susceptible to the cold in Oklahoma, he noted. "We have now gone 118 days with less than a quarter inch of precipitation, and only 2.7 inches in 180 days," he said. "That is really dry even for us."

Offsetting these dry soils was the insulating blanket of 5 to 10 inches of snow that fell across parts of the Southern Plains during the bitter cold last week, which will be key to wheat survival for many producers, said Guillen-Portal. Wheat producers in southeastern Kansas, northern and central Texas and eastern and central Oklahoma were most likely to benefit from this hefty dose of snow.

"Many farmers are reporting to me that in the days before the cold front they got up to 5 inches of snow, which is a huge protective measure for the wheat," Guillen-Portal said of Texas growers. "Overall, based on the interactions I'm having for producers, I'm cautiously optimistic that the damage was not as bad as I originally thought."

In contrast, much of western and central Kansas -- where the most wheat is grown in the state -- received only an inch or two of dry, powdery snow, with some spots in central Kansas getting none. In those drier spots, the Kansas Mesonet shows that soil temperatures dropped as low as 15 degrees, Lollato said.

Kyle Krier farms in central Kansas, near Claflin, and watched a snow forecast of 6 to 10 inches dwindle to a single inch on his wheatfields. "It was enough to keep my continuous wheat fields covered and newer alfalfa fields," he explained. "But unfortunately, the fields that needed it the most, the wheat behind soybeans, which was very small with small root mass, didn't have any cover." For now, Krier can only hope that the 1.5 inches of rain his farm received earlier this winter helped moisten his soils and buffer the cold on those exposed fields.

Not only are droughty fields less able to insulate crown roots from air temperatures, but many emerged late last fall, due to lack of soil moisture. These wheat fields may be less developed and cold-hardy, Lollato noted.

"The crop at greatest risk for winterkill is the late-emerging crop," he said. "Many fields didn't have enough moisture to emerge quickly, and don't have a good root structure and enough tillers, so they weren't as cold-hardy."

For Krier, that means his wheat fields following soybeans, which didn't emerge until December, will be most at risk. That's about 50% of his wheat acreage. On a larger scale, late-emerging fields likely account for about 40% of wheat fields in north-central Kansas and 20% to 30% in western Kansas, Lollato estimated.

In Oklahoma, de Oliveira Silva was encouraged by her recent tour of September- and October-planted wheat plots. Despite the larger, healthier plants in the early-planted plots, wheat from both planting dates were only showing cosmetic leaf burn from the frigid temperatures so far. "The wheat could grow out of it; however, we need a few more warm days to fully assess that," she said.

In both Texas and Oklahoma, farmers often grow wheat for dual purposes -- grain and to graze cattle, de Oliveira Silva and Guillen-Portal noted. Those fields are planted earlier in the fall and tend to be farther ahead in maturity, which could make cold weather more threatening. "However, in that case, the grazing of the top growth often holds back the development of the crop, so that could help," de Oliveira Silva said.

For now, wheat growers will need to wait on warmer temperatures and green-up before they can assess how their wheat fared. Oklahoma's de Oliveira Silva recommends her state's growers wait at least two weeks to fully assess; Lollato estimates Kansas growers will have a better idea in two to three weeks. In Texas, with temperatures rapidly warming, growers might have a full picture of damage in just 5 to 10 days, Guillen-Portal said.

That can be a tough window of indecision, as farmers have to weigh other looming wheat management decisions, such as nutrient applications, Krier noted.

"The question now is, when or if do you go out and start topdressing?" he said. "You don't want to get too far ahead of that because -- before you put much out there -- you'd like to make sure that this wheat will live."

For more on this specific freeze event, see an article from Kansas State University here: https://eupdate.agronomy.ksu.edu/… 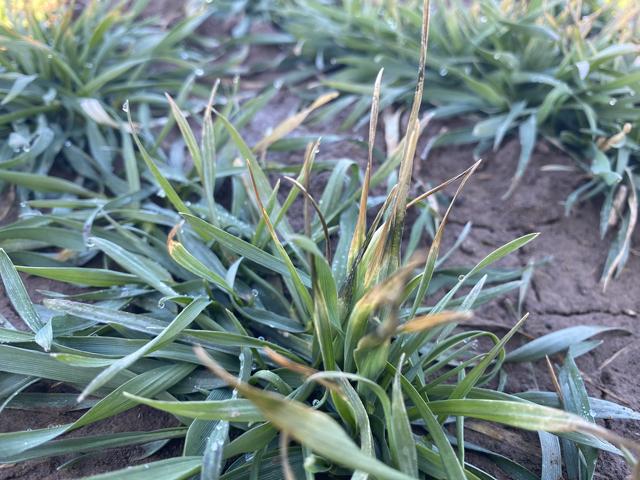