ANKENY, Iowa (DTN) -- A different approach may be needed to get more farmers and landowners to try to increase adoption of soil health practices, according to J. Gordon Arbuckle, a sociology professor at Iowa State University (ISU).

While adoption of most soil conservation measures is on the rise nationwide, implementation on the majority of principal crop acres isn't close. Arbuckle explained why and provided ideas to boost adoption during his summit presentation -- "Ramping Up Soil Health Practice Use in the Midwest: Insights From Recent Social Science Research."

Arbuckle, whose research and ISU Extension efforts focus on improving the environmental and social performance of agricultural systems, summarized results from two major literature reviews from a number of studies and focus groups he and other researchers have completed on the subject.

"We (researchers and Extension officials) often focus on talking about the benefits of (cover crops and soil health) practices, but I think it's actually more important to talk about risk management," Arbuckle said. "Farmers understand the benefits, but those perceived risks oftentimes keep farmers from giving the practices a try."

No-till acres totaled nearly 105 million in 2017, up about 8 million acres from 2012, according to the Census of Agriculture. Reduced tillage increased more than 20 million acres during the same time period to nearly 97.8 million acres in 2017.

Farmers have perceived risks that inhibit widescale adoption of soil health practices such as cover crops, no-till and conservation tillage, Arbuckle contended. Based on reviews of social science research on the subject, here are a few obstacles:

-- Moisture worries. Cover crop may use too much water.

-- Lack of time. Either not getting cover crops planted or terminated in a timely manner or getting field work completed.

-- Lack of confidence in ability to manage a new practice.

-- Lack of sufficient cost-share help and support from landowners, the government or both.

"The barriers to adoption are many," Arbuckle said. "We need to do a better job of balancing our messaging around both the perceived risks and benefits of conservation practices and how to manage the risks."

Jodi DeJong-Hughes, a U of M regional educator specializing in tillage management systems, said educators and farmer advocates need to be express the benefits and challenges of cover crops and other soil health practices equally.

"If we just go out and say how great everything is and then something fails, it doesn't give us much credibility," she said.

Dean Sponheim of Nora Springs, Iowa, was one of four farmers who participated in a panel discussion during the summit about soil health practices they adopted on their farms. His ground is heavy, flat and black. Sponheim said it's not supposed to produce good yields without conventional tillage, according to local conventional wisdom. He added some farmers believe cover crops can't be adequately implemented into cropping systems in northern Iowa and farther north due to the climate and shorter growing season.

Both assumptions, he said, are false. Here's a video of Sponheim talking about soil health: https://www.youtube.com/….

Sponheim started strip tilling some corn acres in 1999 to eliminate crusting issues and subsequent replanting in the spring. It worked so well, he quickly adopted the practice over every acre. He switched to no-till soybeans and eventually adopted cover crops and strip cropping.

"When you do these types of practices, you need that patience," Sponheim said. "For corn, it took about four years for the ground to switch and for the organisms to take over and start decaying the residue."

Sponheim was presented the 2020 Environmental Leader Award by Iowa Soybean Association, but he first adopted conservation practices for economic reasons. Strip-till and no-till reduced input costs without sacrificing yield, he said. Neighbors noticed the results and asked for help, and he now operates a custom strip-till and cover crop business.

"I can almost guarantee to a first-time customer that we will initially retain their yield level when we start strip tilling," Sponheim said. "Give me four or five years, and we will increase yields tremendously with same inputs or even less."

As for cover crops, Sponheim started trying them about eight years ago. He initially did it to sequester nitrogen for the next year's corn crop. He also found cover crops such as cereal rye increased soil tilth, suppressed weeds and built organic matter. His goal is to eventually eliminate herbicides, using only cover crops for weed management.

Sponheim said he's had issues in the past where cover crops reduced yields, but the benefits outweigh the risks. He suggested that farmers who are considering soil health practices seek advice from those who adopted them.

"I'm not going to say we never made mistakes because we have," Sponheim said. "Glean knowledge from people so you don't make the same mistakes." 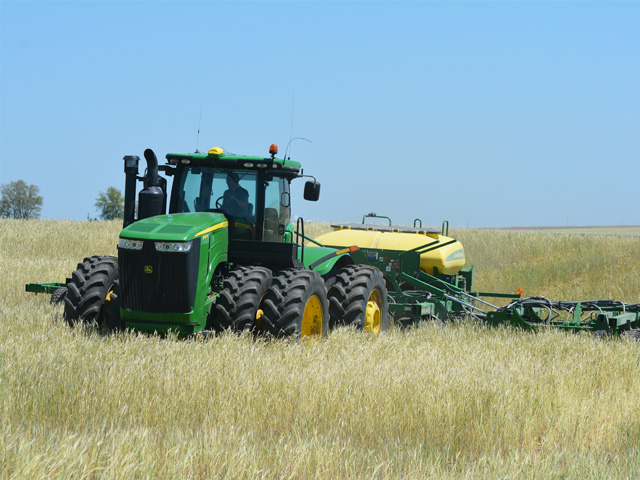