ANKENY, Iowa (DTN) -- Label changes to three dicamba herbicides could increase the use of broadcast sprayer hoods in soybeans to maximize the use of the chemistries.

Last month the EPA approved five-year registrations for two cancelled dicamba herbicides -- XtendiMax and Engenia. It also re-registered Tavium, a dicamba herbicide. All three weed killers can be sprayed over the top of dicamba-tolerant Xtend soybeans and cotton.

A federal court terminated the original 2018 registrations for XtendiMax, Engenia and FeXapan, another herbicide used in dicamba-tolerant crops but not included in the recent registration decision, last June. The court ruled the EPA didn't take into account the herbicides' risk to the environment and years of injury complaints to sensitive crops, among other things.

The new label includes several changes to address off-target problems associated with in-season dicamba use. To minimize issues due to herbicide drift, the EPA increased the downwind buffer between the last treated row of a dicamba-tolerant crop and the nearest field edge from 110 feet to 240 feet, and up to 310 feet in areas where endangered species are located. Other state and county restrictions could apply.

The labels also state the downwind buffer for dicamba-tolerant soybeans can be reduced, possibly back to the original 110-foot separation, if a qualified broadcast hooded sprayer that's proven to reduce herbicide drift is used. The same buffer reductions do not apply to dicamba-tolerant cotton, EPA confirmed after DTN requested clarification.

Growers will need to check for approved hooded sprayer models at the individual websites of the newly labeled products, some of which are still under construction (websites listed below).

"Hoods will provide more flexibility on how to apply the product (dicamba), where it's applied and protect the environment," said Greg Kruger, University of Nebraska pesticide application technology and weed science specialist. "I see this as a win-win for everyone."

He added hoods do not address dicamba volatility concerns.

A wider buffer may prevent or discourage some farmers from planting Xtend soybeans because of small or odd-shaped fields, according to Dave Rhylander, a consultant with Willmar Fabrication based in Benson, Minnesota. The company makes Redball Hooded Sprayers and Sprayer Hoods.

Rhylander said a wider buffer could also limit dicamba use on acres with herbicide-resistant weeds. Open booms can be used outside of the downwind buffer areas.

"Nobody is talking about this or helping people think through the impact of the (extended) buffer," Rhylander said. "A hood will reset the clock to what you did last year (for dicamba-tolerant soybeans) for buffers in nonendangered species areas."

CALL IT A COMEBACK

The label change could make hoods a more common sight in soybean fields. In-row hoods were widely used by southern farmers to post-direct glyphosate to avoid crop injury after Roundup Ready cotton was introduced in 1997. The introduction of Roundup Ready Flex cotton with increased tolerance to glyphosate sidelined hoods for many farmers -- at least temporarily.

Mark Bauman, general manager of Christian County FS based in Taylorville, Illinois, plans to expand the cooperative's fleet of hooded sprayers. The business has one John Deere 4045 sprayer with a Redball hood. The 72-foot SPK645 hood retrofit kit was installed on the sprayer's 120-foot boom in 2019.

"The hood works really well, and the applicator doesn't have to worry about physical particle drift," Bauman added. "They may be a little bulky going down the road, but there is no downside to hoods other than the expense."

Last year Christian County FS sprayed an estimated 75,000 acres of soybeans postemergence with dicamba for about 200 customers. Bauman believes the extra hoods will be needed to keep up with grower demand as more people turn to custom applicators due to dicamba label changes and liability concerns.

"A lot of our growers prefer the dicamba weed control option and minimizing the buffer impact is good," Bauman said.

Ty Witten, director of crop protection strategy for Bayer Crop Science, which markets Xtend seed and XtendiMax herbicide, is pleased the EPA included drift reduction technology as part of the new label. He expects more hoods will be used in the future since they help farmers control herbicide-resistant weeds in and around sensitive areas.

"It's a piece of equipment that can help them control physical drift and be a good neighbor," Witten continued. He said he thinks the data is pretty compelling that hoods work.

A Redball spray hood shielding spray nozzles substantially increase the odds of on-target herbicide and pesticide applications compared to open booms, according to hooded sprayer research on soybeans conducted by the University of Nebraska and Mississippi State University in 2015-16.

Labels for over-the-top dicamba herbicides require nozzles that spray ultra-coarse droplets. At 100 feet, studies show relative drift was about 2% for a hooded sprayer compared to about 5% for an open-boom sprayer.

"There has never been a study where there was zero drift using a hood, but they increase the probability that droplets will deposit on the intended target," said Kruger, who helped conduct the studies.

The EPA used the studies when making the latest dicamba label decisions, according to Rhylander. The company also hosted a hooded spraying demonstration for EPA officials near Washington, D.C. in 2018.

"The EPA knows what they get with the hood," Rhylander said. "Hoods do not allow wind to get into the spray pattern, so you have minimal drift."

Redball Gen II broadcast spray hoods, which are used on the 642, 645 and SPK645 retrofit models, are the only drift reduction hoods approved by the EPA that meet requirements for a buffer reduction in dicamba-tolerant soybeans so far. Products from other companies can qualify upon completion of approved testing and confirmation they reduce herbicide drift. 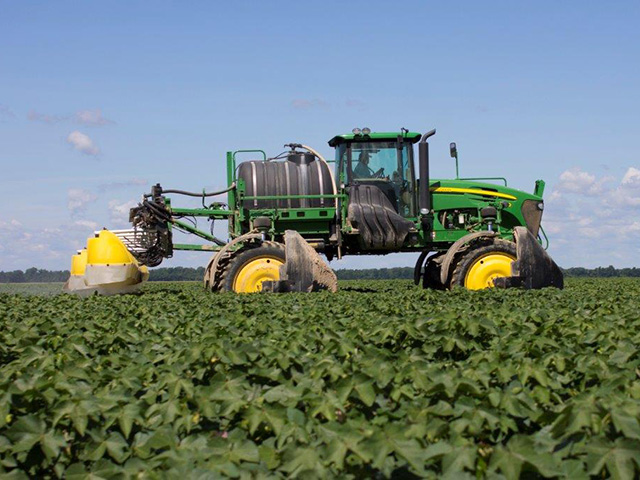