Timing is everything when it comes to nitrogen availability for corn.

Corn plants need a "substantial" amount of nitrogen (N) available after emergence and before nodal (main) root development to maximize yield potential, according to University of Illinois researchers. It's one of the main lessons they learned from recent corn N studies.

"If young corn plants are nitrogen deficient, it doesn't take very long in that state before they start losing yield potential they can't get back," said Emerson Nafziger, a retired University of Illinois Extension crop-production specialist who still works part-time for the university.

There are too many regional and field variables -- such as weather, soil conditions and organic matter -- to make one-size-fits-all N recommendations for corn.

In Illinois, MRTN (Maximum Return to Nitrogen) guidelines range from 153 to 216 pounds of total N per acre. Nafziger believes putting on half to two-thirds of total N needs for corn at planting is enough to adequately feed plants after emergence in the Corn Belt. Thirty to 50 pounds of N per acre can even be sufficient, he said, if N is placed close to the seed (2 to 3 inches away) and in a form that can be quickly utilized with less chance of loss, such as UAN (urea-ammonium nitrate).

Liquid and dry N can be applied effectively at planting using various methods: broadcast, in-furrow, banded 2 inches away from seed and 2 inches below the surface, and injection near the row.

Brian and Blythe Herbek, who farm nearly 2,000 acres near Deweese, Nebraska, use a SoilWarrior strip-till implement to incorporate 125 pounds of N per acre in urea form just before planting. Corn is seeded in the same strip.

The rest of the N -- 55 to 125 pounds of 32% UAN depending on yield potential -- is sidedressed at about the V10 growth stage. Brian Herbek said he applies the same amount of nitrogen today as 25 years ago, but yields are better by 40 bushels per acre (bpa) or more. The Herbek's corn averages 260 bpa, and 300 bushels is common.

"We are utilizing nitrogen better," Brian Herbek said. "If corn is wasting energy searching for it, that's taking away from its purpose of making kernels."

The University of Illinois researchers conducted N timing and form studies at four sites from 2015 to 2018 for corn after soybeans. Total N was set at 150 pounds per acre to provide the best chance of showing yield differences between treatments. Nafziger said 100 pounds of total N is less than farmers would use and there's less of a chance to see differences at 200 pounds, since it's usually enough to maximize yields. Treatments included all N applied at planting, split-plant and sidedress applications, and sidedressing only.

Here are the top four performers and yield averages in the N timing and form studies:

-- 150 pounds of SuperU (urea with both urease and nitrification inhibitors incorporated) broadcast at planting: 229 bushels per acre (bpa)

"My hope is (farmers) keep in mind the need for nitrogen fairly close to the row and fairly early on," Nafziger added.

Corn transitions from small seminal roots to nodal roots at about the V3 growth stage. At V5, Webster said plants determine how many rows will be around the ear, as well as yield potential.

"If you don't have nitrogen readily available at this time, you can slow the plant down and starve it," he continued.

To increase N-use efficiency, Precision Planting created the Conceal nutrient-placement system for planters. It's a knife located inside a groove in a gauge wheel that incorporates liquid N 3 inches from the furrow in a single or dual band.

The PTI farm conducted Conceal nitrogen rate and placement studies from 2017 to 2019, applying a total of 225 pounds per acre of 32% UAN on corn. Applications included preplant, plant and sidedress, or a combination of the three.

By far, the top performer was applying 25% of N as a preplant weed and feed, 25% with dual-band Conceal at planting and sidedressing 50% at V6. Net returns, based on $3.67-per-bushel corn and input costs, averaged nearly $58 per acre. That's compared to a net average loss of a little more than $53 per acre for a 100% preplant weed-and-feed application.

Ed Bateman, a Union City, Indiana, farmer, installed a dual-band Conceal system on his 16-row John Deere planter this year at about $900 per row plus liquid plumbing components. He expects to pay off the equipment within a year based on PTI test results.

"It makes a lot of sense to put nitrogen close to the plant and on both sides," Bateman said.

Nitrogen availability shortly after emergence is important to corn production in the Mid-South and South, but application rates and timing will be different than in the Corn Belt, explained Trenton Roberts, University of Arkansas Extension associate professor and fertility specialist.

Since most corn is irrigated in the Mid-South and South, farmers don't have to rely on rainfall to assist with N uptake.

"As soon as we apply N, we can irrigate and get it into the plant," Roberts said. "We have the ability to wait later in the season to put on the bulk of our nitrogen when there is a higher plant demand to improve efficiency."

He added only 15 to 20% of total N needs to be available when plants emerge, and the rest can be applied in-season.

"We don't want any more than 30 pounds out before V6," Roberts continues. "With the irrigated system, we're trying to move nitrogen to as late in the season as we can." 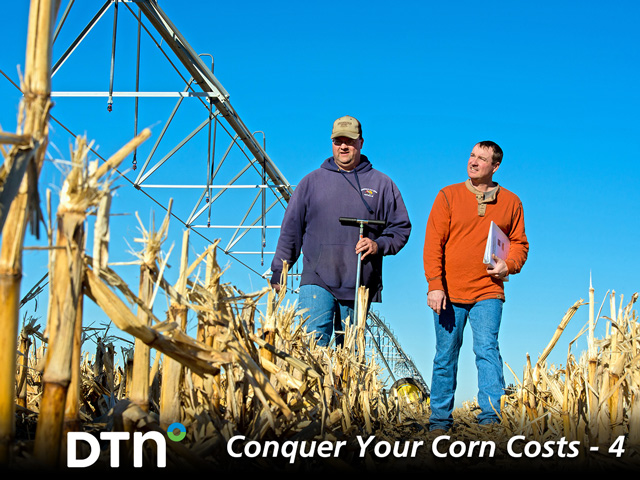