ANKNEY, Iowa (DTN) -- Add snow squall to the list of historic and freak weather events that have plagued farmers in Iowa and other states in 2020.

Up to 9 inches of heavy, wet snow fell across the central one-third of Iowa on Oct. 19, setting records for the date. The heaviest snow fell from Harlan to Polk City and Ankeny. Most snow amounts ranged from 3 to 5 inches.

DTN Senior Ag Meteorologist Bryce Anderson said mid-October snow isn't uncommon in the Upper Midwest, but a snow squall is very rare in central Iowa this time of year. A snow squall is a short burst of heavy snowfall that can cause sudden whiteouts and gusty winds.

"It's unfortunate the heaviest snow band pretty much tracked where farmers were (the hardest hit) by the Aug. 10 derecho," Anderson said.

A derecho -- a storm that resembles an inland hurricane -- destroyed buildings, grain bins and flattened and tangled millions of acres of corn from Nebraska to Ohio. The storm, with wind speeds up to 140 miles per hour, caused an estimated $7.5 billion in damage, according to the National Oceanic and Atmospheric Administration. Iowa was the hardest hit. The 2020 derecho is currently the nation's second most expensive natural disaster this year behind Hurricane Laura at $14 billion.

Drought, hail, multiple hurricanes and wildfires have also ravaged farms in different areas of the country this year.

"It's been a crazy year, there's no doubt about it," Anderson said.

Brock Hansen, who farms near Baxter, Iowa, said the derecho flattened nearly 100% of his family's corn. He farms with his wife, Robin, and parents, Curt and Debbie.

The family purchased a second combine this year knowing it would take at least twice as long to harvest lodged corn. Most of it needs to be combined in one direction and at half or less the normal speed, he said.

The Hansens were combining corn when the snow squall hit. It didn't take long before the early winter blast forced the family to park both of the their 2014 Lexion 740 combines. The family has half of their corn acres left to harvest.

-- Wet corn stalks don't cut as well, which means plants with weak roots systems due to lodging can pull out of the ground easier. This includes the root ball filled with soil, which can bog down and damage machines.

"This isn't fun," Hansen said, referring to adverse weather. "We don't like it and we're not happy, but we know the risks when we plant a crop. That's why we have crop insurance."

Hail accompanied the derecho and crops were hurt by the late-season drought, he said.

The Hansens harvested all their soybeans first. Yields averaged in the high 40s per bushel per acre (bpa), about 10 to 15 bpa less than normal. Corn yields so far average about 120 bpa, about 100 bpa less than average. Brock estimates weather events will reduce overall corn production by 200,000 bushels.

Even with two combines with 12-row heads, Hansen said the family can only harvest 80 to 100 acres of lodged corn on a good day.

"If we don't get another dry stretch, this corn harvest is going to drag on and on and on," Hansen continued. "How much worse can it get?"

Anderson said wet and snowy weather appears to be on tap in the near term for many areas of the Midwest.

Much of Iowa could receive 1 to 1.75 inches of rain through Friday. A trace to 7 inches of snow is expected for the eastern half of the Dakotas, Minnesota, Wisconsin and Michigan, depending on location, through Friday as well.

Anderson said there's a real strong Arctic cold wave that's going to settle into the central U.S. next week. It will bring bitter cold conditions that could slow down harvest. Rain and snow are also in the forecast in many parts of the region on Monday and Tuesday, which will be unfavorable for harvest progress.

"It does look like that final 40% of the U.S. corn harvest will be slower to complete than the first 60%," Anderson added.

Grant Kimberley and his family have 900 acres of lodged corn yet to harvest near Maxwell, Iowa. He expects the snow squall and forecasted precipitation will keep equipment parked for a week or more.

The Kimberleys can only harvest about 50 acres of down corn a day with their John Deere combine with a 12-row head. Despite a fast start to harvest, Grant is worried about finishing harvest.

"Hopefully next week will be dry, but the weather could be turning on us," Kimberley said. "If we have to deal this (wet) weather pattern all the time, that isn't good."

The wild weather may not be over. Anderson said La Nina conditions now exist -- Pacific Ocean temperatures near the equator are 1.5 degrees Celsius lower than normal.

"When La Nina is around, there can be some pretty funny things that happen weather-wise," Anderson said. "The atmosphere responds to that. A sustained high pressure development over the eastern Pacific messes with the jet stream. It forces more of a contrast (in weather)."

Anderson said the jet stream has dipped south recently, allowing more cold air into the Midwest from the arctic region, which has spurred recent snow events. He also said La Nina could be a contributing factor of the recent snow squall, derecho and mid- to late-summer drought.

"It's not completely surprising these (weather) features have happened," Anderson said. 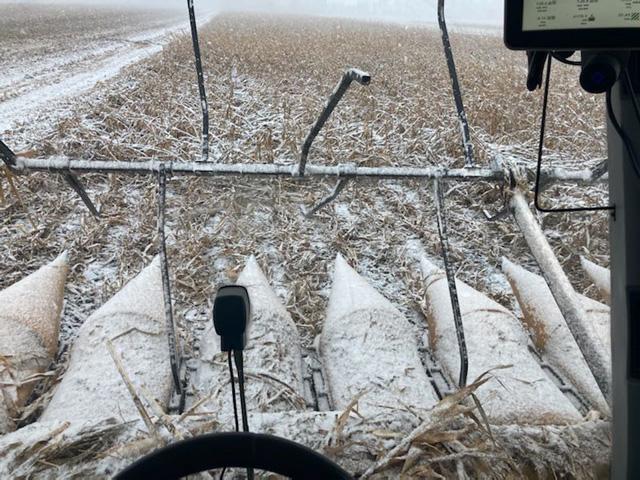