ROCKVILLE, Md. (DTN) -- As a farmer and seed dealer, Travis Albin has seen and sold just about every type of soybean variety out there this year.

But they all had something in common this year in Albin's east-central Illinois territory.

"It didn't matter what you grew; a lot of those soybean seeds shrunk down in size," said Albin, owner of Illini Seed Sales, a Golden Harvest seed dealer. "Pods didn't fill out all the way, and sometimes they would only have one seed in a pod."

The resulting tiny soybeans -- some farmers have compared them to BB pellets -- are a common observation in the Soybean Belt this year.

Try not to blame the beans. Like many of us in 2020, they fell victim to their own optimism, said Seth Naeve, an Extension soybean agronomist at the University of Minnesota.

"Seed size this year is really just the expression of how the environment at the end of the growing season compared to midseason conditions," he said.

"Essentially, the soybeans were highly optimistic," Naeve said. "They put on lots of growth, nodes, flowers, pods and seed. They set lots and lots of seed."

Then the weather betrayed them, Albin recalled.

Temperatures cranked up, and the rains turned off. By August, the gaps between rainfall events had stretched from days into weeks in central Illinois, he said.

"We did not catch any significant rains after the second week of July until the last week of August," he said. He wasn't alone. Flash droughts surfaced in several regions of the Soybean Belt, and existing drought conditions, such as those in Iowa, deepened in late summer.

Soybeans are resilient and known for their ability to compensate for tough weather. But August is crunch time for them, Naeve noted. The days are growing shorter, and those pods must be filled before the growing season ends.

"If, at the end of the year, they don't have the environment to fill all those seeds they've packed on, and as long as they're not facing terrible conditions, the soybean plant continues to support those soybeans, but they don't get large -- they end up being quite small," he said.

The inverse sometimes occurs, too, when stressed midseason soybeans set fewer seeds and then late-season good weather allows them to balloon up into extra-large beans.

Factors beyond weather, such as late-season disease or insect damage, can also tweak seed size, Naeve added. In particular, sudden death syndrome (SDS) and soybean aphids are known to sap the soybean plant's ability to fully fill out seeds late in the season, resulting in smaller soybeans.

If soybeans face severe droughty conditions late in the season, the plant goes even further and aborts pods or simply leaves many of the pockets set aside for each seed empty.

Albin saw that lost potential firsthand this year in one customer's fields.

"I had scouted six times from July 1 to harvest," he recalled. "And those beans went from 90-to-110-pods per plant down to just 65-to-75-pods per plant at harvest. That was disheartening to see."

"By itself, seed size doesn't tell you about yield -- just the relative environmental conditions of the plant throughout the season," he said.

But small soybeans can bring in less money simply because more fit inside a bushel than larger soybeans, resulting in fewer paid bushels for the farmer, Albin noted. And harvesting smaller-than-average soybeans does require some combine adjustments to avoid losing the smaller beans out the back, he cautioned. "We had to adjust the shoe and the chaffers because beans were falling through," he said.

Yet, overall, smaller soybeans are often considered a positive trait by both farmers and seed companies for their easier handling and storage qualities, both Naeve and Albin said.

"As a seed dealer, they are easier to handle, treat and for guys to plant," Albin noted. Nor should they increase a plant's shatter risks in the fall, since the smaller soybeans are less likely to strain the seam of the pod that can weaken and pop open as the mature soybeans cycle through dry and wet conditions. See more on soybean shattering here: https://www.dtnpf.com/….

In fact, companies have worked hard to breed out soybean biotypes that produce extra-large soybeans, Naeve pointed out.

"Back when farmers were buying soybeans by the bushel, they did not want large-seeded soybeans because they couldn't plant as many acres with a bushel," he explained. "So breeders started getting rid of anything too large in their breeding programs."

Don't believe claims that smaller soybean seeds will be less vigorous and germinate poorly, which are not supported by data, Naeve added.

"So, unless you have very crusted soil to push through, small-seeded soybeans can often pop up more easily," he said. "So, ultimately, soil conditions affect if small or large seeds are better."

Quality hasn't been a concern with his customers' baby-sized beans, added Albin.

"The quality is still as good as a bigger soybean this year," he said. "Other than size, we're not seeing anything really abnormal."

See more on seed size from the University of Missouri here: https://ipm.missouri.edu/…. 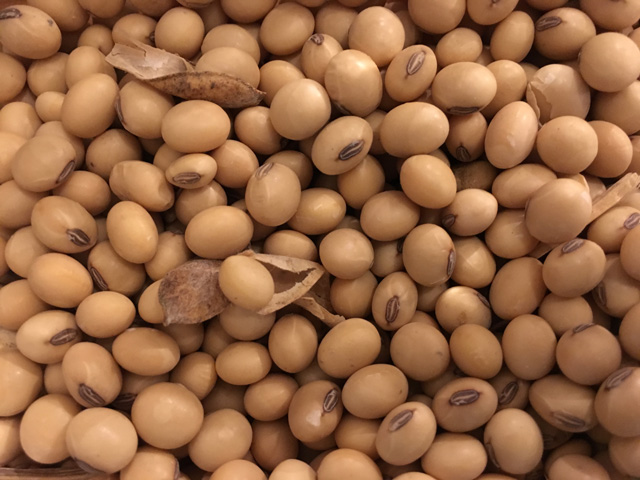