The following is a breakdown of wholesale prices and trends of various fertilizers in the month of September and into the first two weeks of October.

By the end of September, all production states in the United States were reporting some level of corn harvest progress. With application work on oats and wheat finished in Texas, ammonia continued to see a seasonally slow market coming out of the summer in September.

Prompt and prepay ammonia prices in the Eastern Corn Belt ended the month at $290 to $325 per short ton (t) free-on-board (FOB), unchanged overall from August. However, cheaper tons at $280 to $290 in Ohio were unavailable as the Nutrien plant in Lima began an eight-week down period for turnaround in early September. In the Western Corn Belt from Illinois to Iowa, prepay prices were assessed at $320 to $340/t for Q4 2020, mostly unchanged with only a $5 drop in lows in Iowa from prepay prices in August.

After several chemical plants in the U.S. Gulf closed in advance of Hurricane Laura in late August, no major damage was reported at ammonia plants in the area. The CF plant in Beaumont ceased operations for five days following the storm for minor repairs before resuming activities.

The derecho storm event which damaged crops in the Corn Belt, (particularly southern Iowa) also likely contributed to bullish sentiments with 26% of the state's corn rated in poor to very poor condition by USDA for the week ended Sept. 20. Stronger crop prices through the month and expected good weather conditions bring our ammonia outlook to stable to firm ahead of fall application.

Global ammonia continued its upward recovery trajectory from a hard hit in the early days of the COVID-19 outbreak as prices rose in most markets in September.

Yara and Mosaic settled at a price of $228 per metric ton (mt) cost and freight (CFR) for October, up $16 on the $212 CFR agreed for September and follows a Trinidad plant closure announced by Nutrien to remain offline indefinitely. Yara also settled higher prices in the Baltic with the ammonia contract price increasing to $205 to $210/mt FOB, down slightly from $182 to $183 in August. The spot price in Yuzhnyy, Ukraine, also rose to $205 to $207 last month after ending August at $175 to $181/mt FOB.

Asia and other eastern markets remain firm but quieted towards the end of September ahead of the fall holiday week in China. With Middle Eastern producers reporting full delivery books through October and prices flat to firm in other markets, the outlook for international ammonia is stable to firm in the short term.

Urea prices weakened through the month as India took a step back from the international market and U.S. domestic prices followed suit. The New Orleans, Louisiana (NOLA) urea barge price in September fell to a range of $208 to $220/t FOB after ending August at $231 to $235/t.

Mississippi River terminal prices also fell about $10/t from August to $255 to $265 FOB last month. Ex-plant (the price at the factory, not including any other charges, such as delivery or subsequent taxes) at Port Neal, prices were reported at $250/t, a $20 drop from August as falling river terminal prices put pressure on the surrounding markets. In eastern Oklahoma, the plant at Enid was posted at $200/t, a decrease of $70 from the late-August price.

With domestic demand remaining low, prices were set to continue softening until India returned to the market as it did in early October. A larger-than-expected amount offered could signal further strength in the market through October depending on the outcome. In the short-term, our outlook on domestic urea is stable to firm.

September was a relatively slow month in the global urea market as India, the major buyer of the current season, took a pause on purchase tenders after making large purchases at the end of August. Prices around the globe weakened until the end of the month when India announced another tender and seemed to stabilize falling values.

The Brazil urea price ended September at $262 to $270/mt CFR which is down $5 to $6 from August as the country's warehouses remain well stocked in the lull period ahead of its next corn crop. In Egypt, prices settled lower at $252 to $257/mt FOB from $280 in August after confirming the rest of its sales volumes for October at the end of the previous month.

As has been the case from late summer, the fallout of the next India tender will largely determine the mood for the international urea market through the rest of the year. The early October tender resulted in offers at 3.6 million metric tons (mmt) which is significantly higher than previous tenders this year, with the largest coming in at 1.7 mmt in August.

With the domestic season over, China is likely to play a large hand and continue to pressure global supply, leaving our short-term outlook for international urea as stable with the potential to firm based on larger offers and India's continued supply needs.

NOLA UAN ended the month at $118 to $120/t FOB, flat from August as the barge market remained quiet. Some firmer sentiment and price rises on forward purchasing lent some support to the stagnant market, which has been largely flat since summer fill prices were announced.

River terminal prices at CF locations in St. Louis, Missouri, Cincinnati, Ohio, and Mt. Vernon, Indiana remained within a range of $145 to $150/t FOB, flat since summer fill prices settled in July. On the East Coast, however, prices firmed higher to $145 to $150/mt CFR, up from $140 in August. The main price driver here, however, was increased freight costs -- the market remains very slow for the season and sustained low prices have not encouraged many imports.

Ammonia is expected to benefit from projected mild fall weather conditions which could impact UAN sales into the spring. However, UAN remains a favorable spread to urea in terms of value per unit of nitrogen, and any setbacks for ammonia application this fall could signal larger forward demand into 2021. In the short term, however, the outlook on UAN is flat on stale market fundamentals.

With the U.S. import investigation against Moroccan and Russian products ongoing, imports stayed behind last year's pace and tight availability continued to push prices higher. DAP barges at NOLA ended the month at $352 to $360/t FOB, $3 lower from values at the end of August. MAP prices rose significantly to $380 to $385, $20 higher than the previous month. The supply squeeze on phosphates was inequal, as the amount of DAP imported over the past two months was more than twice that of MAP.

On the Mississippi River and its main tributaries, prices ranged from $385 to $400/t FOB DAP and $400 to $415 for MAP, an increase of $15/t MAP and unchanged from DAP prices in August. With domestic supply tight and fall demand beginning to pick up in early October, availability will be short once fall demand hits full swing, in addition to rising prices.

Phosphate imports from Australia and Saudi Arabia are likely to continue throughout the next month with EuroChem continuing to export to the U.S. from its other European facilities, outside of the Russian origin product potentially subject to duties. On continued bullish price fundamentals for phosphates in the U.S., our outlook is that prices will stay firm throughout October ahead of the next countervailing duties (CVD) decision due in November.

Global phosphates stayed firm in September as strong demand in major markets continued. Usual supply lines have shifted with higher proportions of Australian and Saudi Arabian DAP and MAP headed for the U.S. as imports from Morocco and Russia come largely to a halt. This change has tightened supply through the fall as buyers looked to lock in fall tons ahead of the seasonally demand-heavy period.

Asia is expected to stay an active buyer for the remainder of the year with prices also to stay stable to firm on current market conditions. The next expected development in the CVD case against Moroccan and Russian phosphates is scheduled for Nov. 21 and will be announced by the U.S. Department of Commerce. Until then, the outlook on global phosphates is stable to firm.

After a stagnant late summer for domestic potash prices, the price assessment on NOLA barges rose to $195 to $205/t FOB at the end of September, an improvement of $5 to $10 from trades in August. Potash enjoyed the first surge in fall demand at the end of September, particularly in the Northern Plains and Western Corn Belt production areas where harvest progressed fastest. River close also may have been a driving factor as buyers needed to have barges dispatched by early October to reach Minneapolis.

River terminal prices also saw some increases to $230 to $245/t FOB, up from $225 to $235 in August when lower priced imported product was in greater supply and summer fill prices mostly still available. As fall purchasing really began to take off in early October, demand for potash hit fast enough that prompt supply appeared strained in some river markets. Ahead of the rush, major producers announced price hikes at warehouses in Minnesota, Illinois and Ohio markets, $10 to $15 above summer fill prices.

Estimated yields for crop commodities increased in September, due in part to some crop recovery in Iowa from the derecho storm in August, which supports strong potash demand at a time when prices remain at $40/t discount to this time in 2019. In the short term, we expect potash prices to stay stable to firm with some increases likely in October and then to stay flat for the rest of 2020. 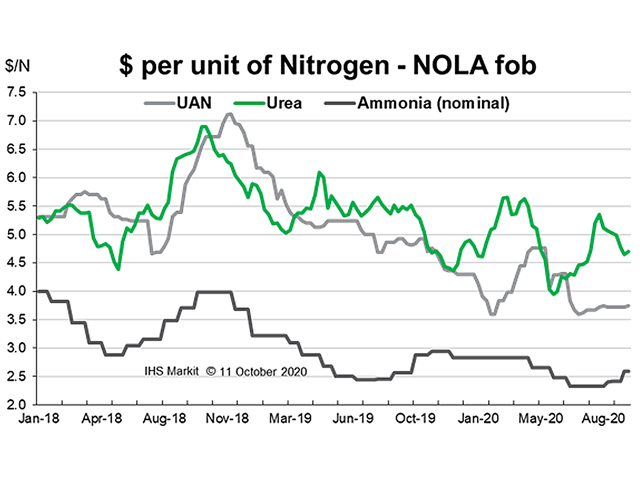