OMAHA (DTN) -- A start-up company developing a heavy-duty truck engine able to run on straight ethanol has reached a milestone in a series of tests performed to validate its technology.

ClearFlame Engine Technologies reported in a news release on Wednesday it matched the torque and power of a commercial diesel engine using ethanol in place of diesel.

The company said the technology delivered 500 horsepower and more than 2,500 foot-pounds of torque, "while eliminating the need for additional aftertreatment such as selective catalytic reduction or diesel particulate filter systems."

The process leverages higher temperatures to achieve diesel-style combustion of any decarbonized fuel.

ClearFlame Engines CEO B.J. Johnson told ethanol industry representatives at the National Ethanol Conference in Houston in February 2020 the technology has the potential to create a large market for ethanol. He said even an optimistic 20% market penetration into the $231 billion heavy-duty diesel market would create 15 billion gallons of demand for ethanol per year.

"The results from ClearFlame's first commercial platform tests are extremely promising and demonstrate a real world, sustainable solution for diesel engine manufacturers as decarbonization requirements continue to evolve in the off-highway, heavy-duty and industrial sectors," Johnson said in a statement.

Cleaner alternatives like spark ignition lack the performance required in many heavy-duty applications. ClearFlame's engine, Johnson said, is the only option to provide both high performance and low emissions.

"The results we've seen on the Cummins engine mark a critical milestone in the commercialization of ClearFlame's technology," said Julie Blumreiter, chief technology officer and co-founder of ClearFlame.

A selling point for the ClearFlame technology is it has the ability to replace petroleum fuels with ethanol in order to reduce greenhouse gas emissions as well as particulate matter and smog, at the same time reducing overall engine cost.

Johnson and Blumreiter are graduates of Stanford University and started ClearFlame based on work from their dissertations. The Chicago-based company received $25,000 in seed money from Ag Startup Engine at Iowa State University Research Park in 2019.

In April 2020, ClearFlame closed on a $3 million initial round of financing from Clean Energy Ventures, along with other investors to help accelerate the development of a diesel engine that can run on ethanol. 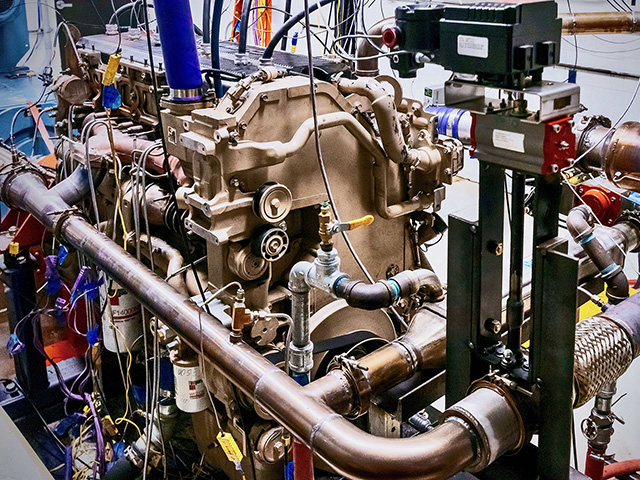