ROCKVILLE, Md. (DTN) -- As summer 2020 advanced, a common question surfaced in parts of the Corn Belt this summer: Why are my beans so short?

The effect was clearly on display when Pioneer field agronomist Ryan Van Roekel laid out some soybeans in south-central Iowa at Corteva Agriscience's Virtual Media Event on Oct. 6. The plant's nodes were clustered tightly together at the bottom of the plant, before spreading out to a more normal distribution higher up the stem.

For many parts of the Corn Belt, May was a chilly slog, marked by occasional dramatic cold snaps. For soybeans just emerging, that was a signal to slow way down.

"Soybean vegetative growth is largely related to heat," Van Roekel explained. Later on, when soybean plants hit reproductive stages (flowering and podding), the length of the day has a bigger effect on the plant's progress. But in the early stages, as a plant is packing on its first nodes and starting to branch and put on leaves, temperature drives the bus.

And that bus was not moving fast in Iowa -- and many other places -- in May.

"It's normal for the first few nodes to be close together because it's usually relatively cool when soybeans are first emerging, but cool weather continued longer than normal," Van Roekel said.

As a result, stems didn't elongate between nodes much, and more early nodes were stacked closer together on the plant than usual. When the much warmer month of June hit, soybeans resumed faster, more normal growth patterns. But with some of those first nodes branching out so low on the plant, the stage was already set for shorter plants, Van Roekel said.

For the most part, the shorter plants are actually a boon, he added. If the weather cooperates, they can pack on just as many additional nodes and pods as a bigger plant, without the risk of tall, heavy plants lodging late in the season.

"Because soybeans are so sensitive to day length, when these shorter beans get into warmer weather in the middle of the summer, they sense the length of the days and know they still have a long time to grow, so they will also put on a lot of mainstem nodes," he explained. "So they've stacked those first few internodes early without sacrificing any yield potential to do so."

Ironically, shorter soybean plants can also result from the opposite situation -- when farmers plant them late in the summer, and the plant senses the shorter days and shortens its lifecycle, resulting in fewer nodes and fewer pods. "When beans are shortened for that reason, then we do see a lot of yield potential sacrificed," Van Roekel noted.

But this season's more timely planted short soybeans should not show a yield hit, unless later-summer weather -- such as the dry August that baked parts of the Corn Belt -- interfered, he said.

"In fact, a lot of people try to artificially induce this effect, and not all are successful," he pointed out.

Over the years, farmers have thought of several ways to shorten their beans. Southern growers can push their planting into March and get the desired effect as the plant grows more slowly early on. This trick rarely works for more Northern growers, whose March-planted soybeans will simply sit in too-cold soils for weeks before emerging when it warms up.

Some growers purposely plant low soybean populations, which allows plants to focus on branching widely early on, without close neighbors to compete with for light and resources. Of course, this leaves the field vulnerable to weeds, which also like those wide, sunny rows, Van Roekel said.

Early season use of "burner herbicides" has also been known to slow down early soybean growth, but the effect on the plant's yield potential is far from ideal, he added. And some growers are experimenting with plant growth regulators, but there is no established method of using them safely in soybeans yet.

There can be a downside to these stout, short soybeans, sturdy as they may be.

If the first nodes produce branches very low to the ground, it can create harvest problems, with some pods hitting the sickle bar and shattering before they can get fed into the combine, Van Roekel said.

Short beans are most challenging for growers with hilly, uneven terrain or rocky ground, where keeping the combine's cutting bar low to the ground is not possible.

For those growers, avoiding short beans might be worthwhile. Van Roekel recommends upping plant populations, especially on marginal ground. That pushes the soybean plant to compete with its neighbors and grow taller and faster.

Each plant will pod less, but the crowding can offset that, Van Roekel said. "Each one is not going to be a heavily podded plant on that low-yield ground anyway," he said. "But if I can put four plants together, each can get just enough and the overall yield per acre goes up." 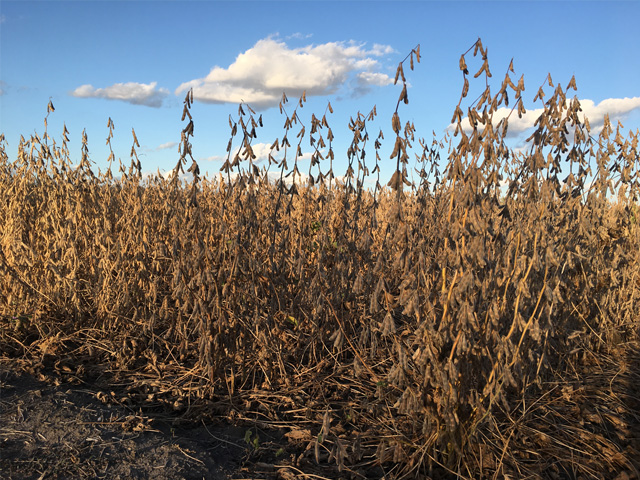