KANSAS CITY, Mo. (DTN) -- Farm policy during the Trump administration has consisted of unprecedented volumes of ad hoc assistance to cope with trade disputes, weather disasters and the COVID-19 downturn.

In 2020, government payments are set to make up at least 36% of net farm income nationally -- $37 billion out of $102 billion in total receipts. Rising trade through trade deals with Korea, Japan, Mexico, Canada and China is expected to eventually boost income, but gains have been slower than expected because of the impact of the coronavirus.

Agriculture could face a significant financial cliff going into 2021 if the ad hoc government programs come to an end and there's no new revenue stream to boost prices and income.

A new aid package proposal released in the House of Representatives late Monday includes more assistance for livestock and poultry producers who euthanized their animals because of supply chain interruptions caused by the pandemic. The bill also includes aid for ethanol producers. There's more potential in the bill for dairy farms and specialty crops as well.

But the House bill also would curb USDA's use of the Commodity Credit Corp., the $30 billion annual fund that has bankrolled the Market Facilitation Program (MFP) and the Coronavirus Food Assistance Program (CFAP) that the Trump administration has used for farm aid. The bill would require USDA to notify Congress before disbursing CCC funds.

Government payments nationally could make up close to 40% of net farm income, and the percentage could be higher in some states. With the latest Coronavirus Food Assistance Program (CFAP 2) payments announced by the Trump administration, government payments could top $50 billion this year.

Exports have not fully hit their stride. While China is showing gradual improvement, the Chinese likely will not make their Phase One obligation of $36.5 billion for 2020. Meanwhile, likely due to COVID-19 challenges, trade to Japan, Mexico and Canada has gone down in 2020 despite signing new trade deals.

John Newton, chief economist for the American Farm Bureau Federation, spoke by livestream Monday at the Ag Outlook Forum in Kansas City, Missouri. Newton said the regular farm safety net programs weren't set up to respond to the retaliatory trade tariffs, especially from China -- so ad hoc aid was needed. Yet, having government aid now make up 36 cents on the dollar is not sustainable for farms or the U.S. Treasury, Newton said.

"So where do we go from here?" Newton said. "We need to figure out how we move to the other side of this and get back to making money from the marketplace."

Blake Hurst, president of the Missouri Farm Bureau, said at the forum that farmers are caught between the reliance on government payments and the hope that trade will increase, raising up prices and incomes as a result. For now, farmers have swapped higher income from trade for the reliability of a government check.

"A tougher trade posture while future taxpayers bear the financial costs seems to be the best of all possible worlds," Hurst said. "But it's a situation that's not likely to last."

Hurst laid out scenarios in which the Trump administration continues in office but pushes to withdraw from the World Trade Organization, which would shrink U.S. trade and further increase farmers' reliance on the federal Treasury. A new Biden administration would likely have little reason to continue supporting government payments or continue tough trade talks.

"In this scenario, agriculture must shrink, and the transition would be painful indeed," Hurst said.

Hurst suggested a Biden administration would pay for more set-aside programs such as the Conservation Reserve Program and take agricultural land out of production for environmental reasons. That then affects industries such as farm machinery manufacturers, he said.

Farm management and real estate companies also have closely watched the MFP and CFAP payments, said Steve Bruere, president of Peoples Co. Looking at University of Illinois data for 2018-21, farmers lose $291 an acre on corn and $69 per acre on soybeans when the crop insurance, MFP, CFAP, ARC/PLC payments are each removed from the equation.

"So, these payments are incredibly important right now when it comes to negotiating rental rates and as we think about where farmland values are," Bruere said.

The government payments often end up capitalized into the rent, so they go to landowners. Combined with low interest rates, government programs have helped protect land values and rent prices.

"So, if we find ourselves in a position where interest rates might increase, where we lose some of those government support programs, that could translate into a tough environment for farmland values," Bruere said.

Newton noted the constant talk among food companies and others about agriculture being part of a solution for climate change. A "green payment" could offset the decline in ad hoc payments. Such a payment would also help increase conservation practices.

"So green payments are part of the solution but could be another income stream for farmers and ranchers," Newton said.

That delves into looking at what could happen with expanding conservation programs for working lands through the farm bill, "which we like to call the original Green New Deal," Newton said.

In that vein of expanding conservation programs, the Biden campaign has proposed boosting the Conservation Stewardship Program payments, or possibly another working lands program, that would provide additional income to farmers.

Former Agriculture Secretary Tom Vilsack, who advises the Biden campaign, noted of the challenges in agriculture is finding new ways for farmers to make additional income in addition to selling their commodities. He also pointed to the growing recognition that if the U.S. is going to get serious about addressing climate change, then a program or market that pays farmers for conservation practices makes sense.

"And I think there is a growing recognition that if we're going to get serious about climate, we're ready to get serious about reducing emissions. If we're going to consider about storing carbon, and sequestering carbon in rural America, then American agriculture needs to be engaged and involved because that's where the land is at that has the capacity and the capability of storing tremendous amounts of carbon," Vilsack said.

With such a benefit to society, Vilsack said, "It only stands to reason that farmers should be paid to do it."

One option is using the Conservation Stewardship Program and providing payments to farmers who implement practices that store carbon in the soil, which would include providing farmers with the ability to finance those conservation practices that include no-till planting, for instance. Vilsack also pointed to the increasing interest by companies to pay for offsetting their emissions or reduce emissions in the food supply chain to tout a sustainability claim. Stacking a CSP payment with a carbon market payment would provide higher incentives, he said.

"So the combined Conservation Stewardship plan plans that help to defer the expense associated with the conservation practices," Vilsack said. "And then you create an ecosystem, a market that rewards the farmer for sequestering X amount of carbon, that offset someone else's carbon footprint. Now you've got a situation where farmers can benefit economically. And they will be encouraged, obviously, to think about this."

Both Newton and Vilsack were more cautious about land retirement programs, such as the Conservation Reserve Program. Newton pointed out that set-aside programs do not work when global competitors are expanding agricultural acreage. Since 2006, Brazil, Russia, Ukraine, China and India have each expanded crop acreage at least 24%. An expanded CRP won't drive up commodity prices.

"We would just provide incentives for more acres to come along elsewhere in the world," Newton said. 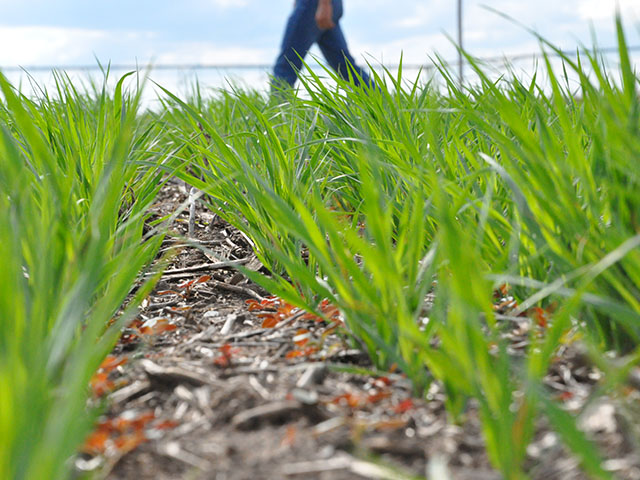