Madrid, Iowa (DTN) -- The Ihle family have been playing an unnerving game of hide-and-seek this harvest.

Tin, wood 2x4s with nails, mailboxes, a traffic cone and what seemed like half the town of Madrid, Iowa, was deposited in one of Brian and Mike Ihle's soybeans fields just east of town by the Aug. 10 derecho. Unfortunately, the brothers' Case-IH combine found hidden debris all too often despite their best efforts to find it first.

Cody Ihle, Brian's son, and his first cousin, Ben Gilbert, looked for troublesome trash as they shuttled soybeans from the combine, operated by Mike, to a semi. They would stop and collect small pieces from rows or throw it off to the side. For bigger storm scrap, the tandem would alert an employee in a Bobcat skid steer with a grapple bucket to remove it.

"We're trying to find and get the debris out of the way before the soybean head goes through, but that doesn't always happen," said Cody, as dusk set in. He has worked on the family's farm throughout high school and recently joined the operation full time after graduating from college.

"It (storm debris) will be even harder to see after the sun goes down. We've already broke the sickle bar twice. Not only that, the wind laid over the soybeans," Cody said. "We have to run at a hard angle to pick them up, making them harder to combine. These are all difficulties many farmers in Iowa (and other states) are dealing with."

Brian added, "It's not fun. This will be a challenging harvest."

The Ihles spent much of the morning of Sept. 24 replacing more sickle sections and broken fingers on the soybean head before heading to the field again. Many Midwest farmers affected by last month's windstorm will likely encounter similar conditions resulting in a slow, potentially costly harvest.

Prior to the derecho, the Ihles expected one of their best corn crops ever and good soybean yields, despite a flash drought in August. Those hopes were dashed during the 40-minute storm, Brian said.

"The towns of Madrid, Luther and others all looked like a war zone," he painfully recalled. "Almost all the crops went down. One of our bin sites that holds 300,000 bushels is completely gone."

Their insurance adjuster determined damage to their soybean fields from lodging and hail ranged from 15% to 65%. The field by Madrid was rated at 15%. It averaged 55 to 60 bushels per acre (bpa).

About 1,500 acres of the Ihles' corn was deemed "mechanically unharvestable" and destroyed. It was rolled, then vertical disked or chisel plowed or both. The family will harvest 1,500 acres of corn, using a corn reel and down corn augers on the combine. Future losses will be re-evaluated. The farm operation carried multiperil crop insurance with wind coverage.

"We will come out OK and be able to make our payments, but it will not be nearly as good as if we had the bushels," Brian said. "The corn was beautiful, probably 225 to 250 bpa (before storm damage). We just need to get through this challenging year and get it in the books."

In a large swath of cropland in Dallas, Greene and Boone counties, the corn has been tilled under.

Morey Hill, who farms near Perry, Iowa, had 85 acres deemed unharvestable and paid out by insurance.

Still, a lot of ugly cornfields remain with much of the crop still nearly flat. That's because adjusters from different crop insurance companies are taking different views on whether the crop is salvageable to harvest. Hill said he knows farmers in his area where a field on one side of the road was declared a total loss while the other side of the road the crop has to be harvested to determine the losses.

"That's given people a lot of people heartburn," Hill said.

Hill harvested soybeans on Sept. 24, about 10 days ahead of normal, because the weather across much of Iowa has been dry and warm for most of the month. Considering the dry summer and the derecho, Hill estimated his soybeans were coming in the high 40s bpa. "For the year we've had, I can live with that," he said.

Farmers will be combining in the heat this weekend. Parts of the state could approach record highs on Saturday, as forecasts call for high 80s and even low 90s in some areas.

Iowa cooperatives lost an estimated 57 million bushels in storage capacity because of the storm. Hill said local grain elevators are adjusting, and moving grain around to compensate. The storage loss this fall will likely be offset by the amount of acres like his that adjusters allowed to be tilled under. "I'm sure that's what the co-ops and the storage people are thinking," Hill said.

Iowa's two senators on Thursday wrote a letter to Agriculture Secretary Sonny Perdue asking for federal aid to be provided to Iowa agricultural cooperatives hit by the storm. Sens. Chuck Grassley and Joni Ernst stated at least 71 grain elevators for seven different cooperatives in Iowa were damaged or destroyed in the storm. The uninsured costs for each location will be around $700,000. The cooperatives were already facing challenges because of the coronavirus, the senators wrote.

Hill, an Iowa Soybean Association director who also sits on the American Soybean Association board, said he's concerned about public perceptions of farm support right now, especially following this week with the announcement of a second round of payments under the Coronavirus Food Assistance Program (CFAP) and the political fight in Congress over the funds that pay for the CFAP and other farm programs.

"My biggest fear is the fallout from the general public about the aid ag is getting this year," Hill said.

Some central Iowa farmers are pleasantly surprised at numbers flashing across their combine yield monitors, given this year's weather woes. How well some lodged and tangled corn is feeding into harvesters has also been surprising. However, many have not started harvesting their corn yet, so their yields are unknown.

Craig Twedt of rural Ankeny, Iowa, reported initial soybean yields averaging in the high 50s to low 60s bpa on Wednesday. "I'm happy with that considering how dry it had been," he said.

As for down corn, Twedt said his insurance adjuster told him to try and harvest it. If that doesn't work, then he should stop -- the fields will be considered a total loss. If it does work, ears will be counted on the ground to determine the loss. He ordered down corn augers for his John Deere 9660 STS combine and already had a corn reel to help pick up lodged corn.

Jeff Pepper piloted a John Deere 9510 Maximizer combine in a corn field 6 miles northeast of Boone, Iowa, on Wednesday. He had the snouts of the six-row head skimming the earth and a spinning corn reel to help feed in tangled, lodged stalks.

In some places the corn is standing OK, in other areas it's flat. Initially, he's been able to combine in both directions and get all the corn. But, harvest has just begun.

"It's amazing we can harvest," said Pepper, who works for this first cousin Dave Pepper. "Some fields are better than others, but you have to go slow, like 1.5 to 3 miles per hour."

"Even in the bad areas, the yield monitor doesn't change," he said. "So, we're getting it all." 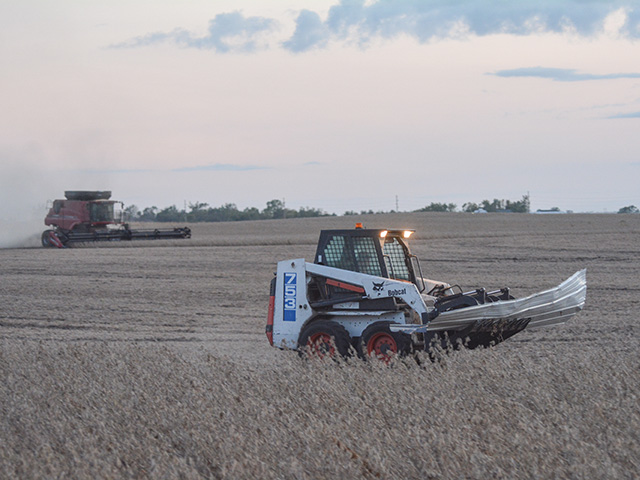