The middle one-third of Iowa was the hardest hit. Winds topping 140 mph fully or partially blew down an estimated 3.5 million acres of corn in the state, according to the Iowa Department of Agriculture and Land Stewardship. This included 400 acres of corn used for equipment demonstrations at the show.

"Our hearts go out to all farmers affected by the storm," said Aaron Siefken, Dragotec USA marketing manager. "Every farmer will eventually deal with at least one year of down corn. It's not a matter of if, but when.

"I know it's (harvesting down corn) something farmers don't want to do, but it has to get done," he added.

During the show's corn harvest demonstration, combines were able to travel in both directions at 3 to 4 mph most of the time.

"I think we had a pretty good run," said Garrett Williams, Iowa and Wisconsin territory manager for MacDon, a Canadian-based corn and soybean head manufacturer. "I didn't see we were leaving any ears in the field, even in the flat areas."

"There's a lot of (Midwest) corn that looks like this," Dahl said. "We wanted to show farmers that even in adverse conditions, our head can go through it without having problems with plugging, lodging and processing stalks."

Dahl said Calmer's patented "open window" feeding chamber efficiently brings stalks into the row units for them to be processed.

"We're seeing a good stalk chop even in the down and lodged corn," Dahl added. "We're getting the stalks engaged with the stalk rolls through the integration of our feeding chamber and then chopping up stalks with our razor-sharp blades so they can start to decompose so there's less trash left in the spring."

Since the storm, he said, customers have asked for harvesting advice for lodged corn. He recommends flattening out corn heads to approximately 20 degrees to get underneath corn and slowing down gathering chains, if possible.

More information is available at www.calmercornheads.com.

Dragotec USA, based in Fenton, Iowa, brought a Drago GT 12-row corn head with QuadSuspension and optional aggressive snoot points and short down corn augers to the show. It was attached to a Case IH 8230 combine.

"The aggressive gathering chains bring corn into row units, and the deck plates keep a firm hold of it to be processed by the knife rolls," Siefken said. "We're not hindering crop from coming in or chopping it off before it gets to a safe spot in the row unit."

Self-adjusting deck plates are engineered to continually apply pressure to incoming stalks to bring them into the head, automatically minimizing plate gap where yield loss can occur. Every 1/8-inch gap between the stalk and deck plate can cost a farmer up to 4 bushels per acre, according to the company.

In one study, Siefken said, deck plates made more than 6,100 1/8-inch adjustments per acre. With hydraulic deck plates, he said, a farmer may make adjustments "a few times" in a field.

"They (farmers) have the possibility of losing out on a lot of yield, which is a big deal now," Siefken added.

Drago's optional aggressive snoot points and long or short down corn augers help guide corn into the head. Long down corn augers are recommended for severe cases of lodging. Siefken urged farmers to remove ear savers from corn heads so they don't hinder the flow of corn.

More information is available at www.dragotec.com.

A company more known for soybean draper platforms, MacDon got in the corn head business a couple of years ago. MacDon featured its 12-row C3012 CF corn head at the show, which was attached to a John Deere S680 combine. It also sported the rotary end divider option to lift down corn.

Williams said the company is putting a lot of work and money into their C series corn heads, especially to harvest in less-than-ideal conditions. He believes in areas where crop adjusters deem down corn is salvageable, MacDon corn heads will shine.

"The low-profile design of our corn snouts helps us get under ears and bring them in," Williams said. "Pair that with our rotary end dividers, both will help keep the crop where it needs to be.

"Plus, with the way our gathering chains are designed, they grab the stalk early before the OctiRoll knife system gets a hold of it," he continued. "For feeding in down corn, that's a big advantage."

Williams recommended running the C series head at a 23-degree angle close to the ground, which typically allows the row snouts to get under down corn without bringing in dirt.

More information is available at www.macdon.com.

Lodged corn can be difficult to combine with standard harvesting equipment, according to a recent ISU release. Powered corn head attachments can reduce the number of missed stalks and ears.

-- Finger reels attach to the framework of the corn head. They consist of a horizontal rotating shaft with long (3-4 feet) slender steel bars (fingers) that rotate like a grain reel to help move lodged corn stalks into the gathering chains and cross augers.

-- Paddle reels consist of a horizontal rotating shaft with a set of paddles (usually three) per row, approximately 12-18 inches long and 4-8 inches wide. Rotating paddles assist material movement up the gathering chains and into the cross augers, which is especially effective with tangled corn. Unlike a finger reel, the paddles are set slightly lower and farther aft in the head and attached to the frame.

-- Snout cone attachments consist of tapered cones with shallow (1-2 inch) helical flighting. The cones are mounted in line with, and just above, the snouts. The cones rotate to use screw-auger action to lift lodge and tangle stalks up and pull them back over the snouts. 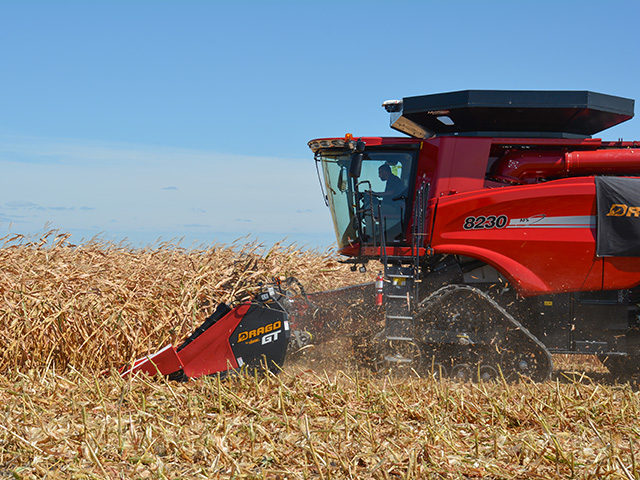