ANKENY, Iowa (DTN) -- A six-step nutrient management program can help corn growers take yields to the next level. Yield goals, economics and a crop's nutrient level will determine if nitrogen applications just before or after tassel are included in the program.

Pioneer Agronomy Manager Matt Clover believes farmers can increase average yields over time from 200 to 300 bushels per acre (bpa), for example, by determining nutrient needs to meet production goals. He headlined a webinar last week entitled, Plant Nutrition Management for 2020 and Beyond.

"With nutrient management, it's not just about applying more fertilizer," said Clover. "I would never say just keep dumping it on to increase yields. You typically see diminished economic returns.

"To me, it's about how do we increase nutrient availability while focusing on cropping system management," he added. "And, exploit the benefits of that to make nutrient more available during the growing season."

-- Soil sample. Clover recommends sampling at least every four years. This provides a baseline of nutrient availability in soils.

-- Set up a base nutrient program to meet yield goals. This could include fall, spring and early summer applications.

-- Determine if an early season corrective nutrient application or a late-season rescue application are needed. Or wait to adjust the program next year.

As corn transitions from the vegetative to the reproductive stage, agronomists say farmers often wonder if a late-season nitrogen application will increase yield and profit potential. The crop still needs to take up about 35% of its total N needs at VT to R1.

Clover said it depends whether the application is part of a grower's base program as highlighted in step two or needed to correct a nutrient deficiency as in step four of his six-step program.

"The data would really say there is probably not a benefit in fields with moderate yield goals," Clover said. "However, as we think about trying to drive yields higher, a lot of high-yield contest winners have shown that spoon feeding and systematic nitrogen applications through tasseling can provide a benefit. But it has to be part of your base program."

Waiting until VT or R1 to apply the final 10% to 15% of the crop's planned nitrogen total may be beneficial to give plants a boost to meet yield goals, he added. Rescue applications of N to correct deficiencies at VT or R1 can increase yields, but the odds are low that applications will provide an economic return, Clover concluded.

"We're trying to keep plants alive after ears are filled," he said. "By feeding corn, they have all this energy to pack on test weight to increase yield."

Haines' N program consists of 100 units of SUPERU, a urea-based granular fertilizer that contain urease and nitrification inhibitors, and ammonium sulfate at planting and V6. Then, he applies 80 units of the same mixture at V8 and VT. Corn also gets foliar applications of N via helicopter at V3, V5, V8, VT and brown silk, which total about 30 to 40 units. Non-contest corn will often get less late-season granular N and only three foliar feedings. He said the program is profitable.

"We harvest corn at 18% to 20% moisture and it still looks like it could make silage," Haines said. "Grain is dry but the stalk is alive so it can put energy in the ear."

Fernandez also said recent research indicates N applications around the V12 development stage rarely produce better yields than a pre-plant only or pre-plant plus sidedress application by V8. The only exception is irrigated sandy soils.

"In some situations, the yield with the later application was similar, but in some fields, a late-season nitrogen application actually ended up reducing corn yield compared to earlier applications," Fernandez wrote.

The only situation where a post-tassel application before R1 may be beneficial to increase yield is if the crop is severely limited by a lack of nitrogen, Fernandez penned.

"In those cases, however, one should carefully evaluate the potential return on investment, as the nitrogen application cannot make up for lost yield potential," he continued. "That said, there was generally low potential for nitrogen loss during the spring this year, so if an adequate amount of nitrogen was applied earlier in the season, additional nitrogen applied now will likely result in no yield benefit."

To see the webinar, go to https://www.pioneer.com/…. 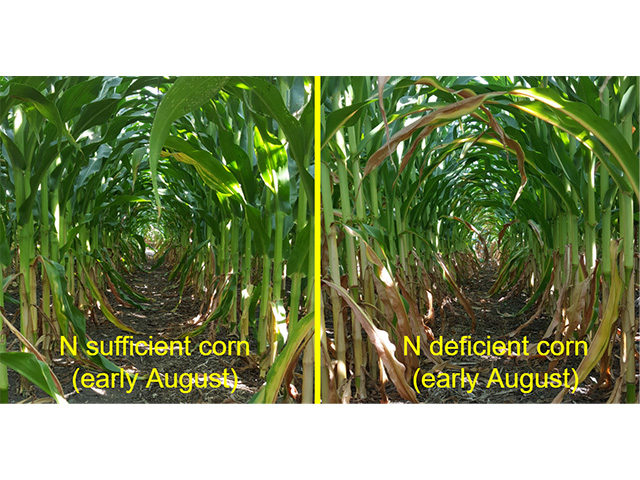