Soybean fields appear to be at the top of the menu this month, with a growing number of agronomists and farmers reporting sightings of soybean gall midge, thistle caterpillars and Japanese beetles in soybean fields in the past week.

Soybean gall midge is a relatively new insect that has been spreading for two years and is a confirmed pest in 95 counties in Minnesota, South Dakota, Nebraska, Iowa and Missouri.

Fortunately for growers, a multi-state team of scientists is aggressively monitoring and tracking its spread here: https://soybeangallmidge.org/…. So far in 2020, they have confirmed its emergence in four states.

Scientists have found soybean plants seem to be most at risk for infestation after the V2 growth stage, when fissures that form on the stems during normal growth offer an opening for the gall midge adults to lay eggs. The resulting larvae, which start out white and then turn orange as they grow, feed within the stem, resulting in brown, brittle stems and even plant death.

Because the adults' emergence and egg laying can occur over a long period of multiple weeks, treatment has been tricky. University of Nebraska scientists did document some success with pyrethroid insecticide treatments applied to soybean fields with previous infections, up to 10 days after the first adult emergence, on fields at or beyond the V2 stage.

"Since soybean gall midge is a field edge infesting pest, growers may only need to treat the first 60 to 120 feet of a field edge that is directly adjacent to a field that was injured the previous year," University of Nebraska entomologists advised in a recent CropWatch article.

Keep in mind that, so far, no insecticide treatments have provided total control of the pest, the Nebraska scientists cautioned. See the article here: https://cropwatch.unl.edu/….

Growers who have not had a previous gall midge infestation in their fields or county should alert their Extension office if they find them, as the pest is actively expanding its geography.

These shiny-backed, copper-colored beetles started to surface in mid-June in many states such as Indiana, Illinois, Iowa, Wisconsin and North Dakota.

Most sightings have been in soybean fields, which can sustain an impressive amount of feeding before any treatments are necessary, even in reproductive stages, noted Matt Montgomery, a Pioneer agronomist who works in west-central Illinois.

"You really need to see 20% defoliation of all the leaf area across an entire field," he said. "It's a very significant portion of leaf material that needs to be gone before you have to act."

The University of Nebraska's guide to insect defoliation in soybeans adds that in the vegetative stages of a soybean field, insecticide treatment isn't warranted until defoliation levels near 30%. See more here: https://cropwatch.unl.edu/….

In corn, the primary concern is silk clipping, which can interfere with the critical pollination stage. Generally, scientists recommend insecticide treatments if you can find three or more Japanese beetles per ear, silks have been clipped to less than 1/2 inch and pollination is less than 50% complete.

Montgomery recommends the "shake test" to monitor your pollination progress if Japanese beetles are becoming an issue in your cornfield.

"Husk it, shake it and see how many silks fall away," he said. "If they fall away from 3/4 of an ear, that means 3/4 of the ear is established, and you don't need to get too wound up about Japanese beetles coming in."

For a second year in a row, some states are reporting significant levels of thistle caterpillar feeding in soybean fields, most notably Iowa, Nebraska, North Dakota and Minnesota.

The thistle caterpillar is the larval stage of the painted lady butterfly, which migrates from the southern U.S. and Mexico, laying eggs in the Midwestern states around mid-June, typically.

While the caterpillars prefer Canada thistle plants, they are happy to feed on crops such as sunflowers and soybeans. The caterpillars create webs that pull leaves together to form a protective cover as they feed, leaving big matted clumps of defoliated leaves in the field. See more here: https://crops.extension.iastate.edu/….

The Soybean Research Information Network states treatment may be necessary if defoliation exceeds 30% in bean fields in vegetative stages and the caterpillars are still present and feeding. In reproductive stages, that defoliation threshold drops to 20%. See more here: https://soybeanresearchinfo.com/…. 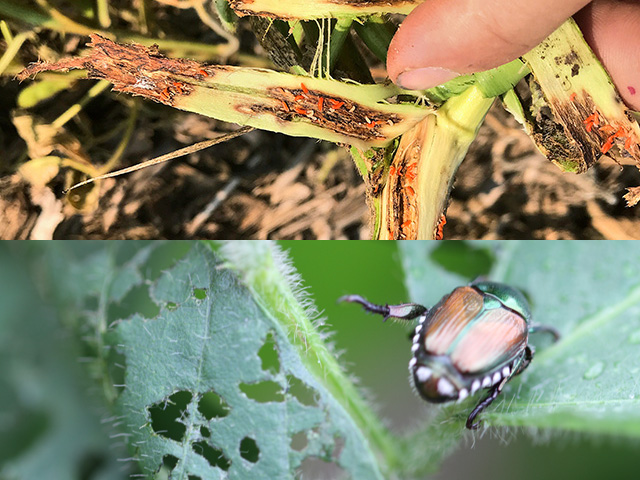