ROCKVILLE, Md. (DTN) -- Corn and soybean farmers should be alert for rust diseases this year as southern corn rust and soybean rust made historically early arrivals in the Southeast and Gulf states this summer.

Aided by an extremely mild winter and recent tropical storm systems, the two rust diseases are set to thrive in the southern states and perhaps make it north early enough to threaten yields in the Corn and Soybean Belts.

The tell-tale, small, tan-to-orange pustules of southern corn rust were first spotted this year on June 3 in Rapides Parish in central Louisiana, and on June 4 in the southwestern county of Decatur, Georgia.

"It's the earliest I've ever seen it," said University of Georgia Extension plant pathologist Bob Kemerait. Within a week, three other southern Georgia counties confirmed its presence.

"It's widespread across the southern coastal area and it's early," Kemerait said.

"It's exactly the sort of scenario Midwest growers should pay attention to," he said.

The disease can spread rapidly under ideal conditions -- moisture, high humidity and temperatures around 80 degrees. So Kemerait often recommends growers keep a close eye on the following factors as their fields approach tassel: optimal weather, rust confirmations nearby and good yield potential. If all three align, a fungicide application may be warranted.

Fortunately for growers, university scientists in the U.S. and Canada work to monitor and record the spread of southern corn rust every year with this ipmPIPE map: https://corn.ipmpipe.org/….

For a guide on how to scout for the disease and manage it, see the Crop Protection Network: https://crop-protection-network.s3.amazonaws.com/…. For help differentiating southern corn rust from common leaf rust, see this Purdue guide: https://www.extension.purdue.edu/…

Like many a snowbird, soybean rust thrived in the mild winter in the southern U.S. this year. In Georgia, Kemerait could find it on living kudzu -- a common host for the disease -- throughout the winter.

So it was not a surprise when he found rust on soybeans the earliest it's ever been spotted in that crop in Mitchell County, Georgia, on June 9.

"It's very, very early and it's very widespread across the coastal plains," he warned. See the map here: https://soybean.ipmpipe.org/….

Southern soybean growers are well trained to spray for soybean rust around the R3 growth stage when conditions favor the disease, but Midwest growers should be on alert, too. Although the disease rarely makes it that far north in time to cause economic damage, it got an early start this year, and there are fewer eyes tracking it than ever before, Kemerait acknowledged.

In 2017, the United Soybean Board ended its national funding effort to help state scientists keep up Sentinel plots, designed to monitor soybean rust's spread each year. Some states, such as Georgia, have continued to receive funding from state soybean and corn checkoff groups, but the effort is no longer consistent across the southern U.S., Kemerait noted. See more here: https://www.dtnpf.com/….

That means the ipmPIPE map for soybean rust may no longer be as accurate as it used to be. "Sentinel plot scouting is much restricted from where it once was," Kemerait said. "In Georgia, our Sentinel plots remain what they were in the past, but other states have had to cut them, and the map shows it." 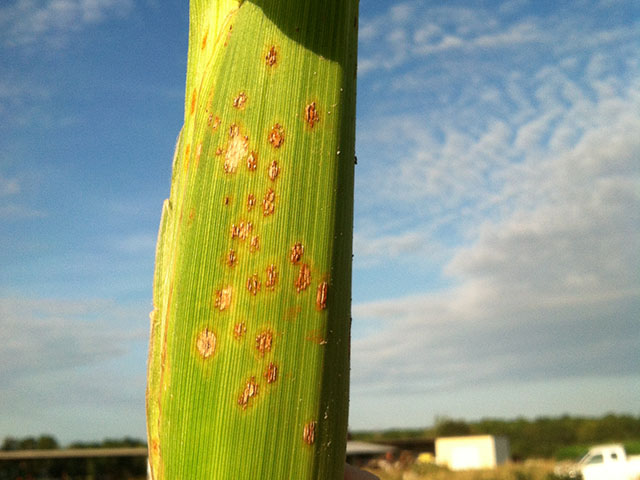